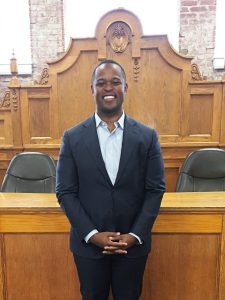 On Tuesday, November 22, Attorney General Daniel Cameron visited Hart County and spoke with members of the Hart County Chamber of Commerce, Fiscal Court, and others interested in civic health.

Cameron’s visit began with an introduction from Hope Hawkins, Executive Director of the Hart County Chamber of Commerce. Hawkins introduced the Attorney General, communicating that “as the chief law enforcer of the Commonwealth, Attorney General Cameron is dedicated to public safety, fighting the drug epidemic, and partnering with law enforcement.”

Attorney General Cameron thanked Hawkins and Judge/Executive Joe Choate for the opportunity to come and speak. He introduced the topics that he would be addressing during his visit, stating that “…the common theme that, you know, I’ve been trying to share with folks as it relates to what our office has been involved in is really two big issues, two big items.” The first of these issues was the opioid epidemic.

Cameron has been combatting the opioid epidemic by encouraging counties and cities to join the National Opioid Settlement website and to indicate their approval of the agreement with Johnson & Johnson, Cardinal Health, McKesson, and AmerisourceBergen. According to the Attorney General’s “Opioid Settlement” page on the Commonwealth of Kentucky’s website (2020), there are two settlements that are part of the Global Opioid Settlement, one with opioid manufacturer Johnson & Johnson and the other with opioid distributors, Cardinal Health, McKesson, and AmerisourceBergen. Attorney General Cameron conveyed that the Global Opioid Settlement could bring over $482 million to Kentucky.

“This is a big deal,” Cameron said of the significance of the settlement. “It’s not often that you can get that many dollars, that many millions of dollars in the door for a specific reason, for a specific purpose, which is here, the opioid epidemic. And some of you all sitting in this room either have family members or friends or friends’ children that have been impacted by this.”

Cameron went on to explain how the money received from the settlements would be distributed, stating that 50% would go to the state and the other 50% would go straight to counties and cities. To receive the money, however, any claims would have to be released, Cameron noted. Despite this, the Attorney General expressed his approval of the settlements.

Members of the Hart County Fiscal Court showed their approval of the settlements by approving Judge Choate’s signing of the National Opioid Settlement during their meeting on November 18, 2021.

The second topic that Attorney General Cameron addressed during his visit was what he referred to as “a national conversation about the role of state government versus the federal government.”

Cameron gave the example of students getting vaccines for school, stating that when students get vaccines for grade school, it is state law and not federal law at work and that it is an example of what is traditionally referred to as a “police power.” A police power, Cameron explained, is “a power of the state to look out for the health, safety, and well-being of our citizens.” Attorney General Cameron related this information to the vaccine mandates being issued by President Biden’s Administration.

“…All three of those are, in my judgment, an intrusion upon the sovereignty of a state to make the decision about our health, safety, and well-being,” Cameron said.

He also mentioned that his office has filed or joined suits contesting the constitutionality of President Joe Biden’s administration to issue the mandates. Although recognizing the gravity of the pandemic, Attorney General Cameron emphasized the importance of following the constitution.

“COVID we recognize is serious, but at the same time any health and safety measures or precautions that are taken need to be done in a way that is consistent with and abides by our constitutional rights in this country,” Cameron explained.

After speaking on the opioid epidemic and the roles of state and federal government, Attorney General Cameron addressed members of the Chamber of Commerce, Fiscal Court, and those interested in civic health who were present at the meeting, thanking them for their navigation of pandemic-related and other issues during this difficult time.

For more detailed information on Attorney General Cameron’s responses to these and other issues, visit https://ag.ky.gov/about/Pages/Attorney-General.aspx.

Additional information about the “Opioid Settlement” can be found at https://ag.ky.gov/Priorities/Tackling-the-Drug-Epidemic/Pages/Opioid-Settlement.aspx 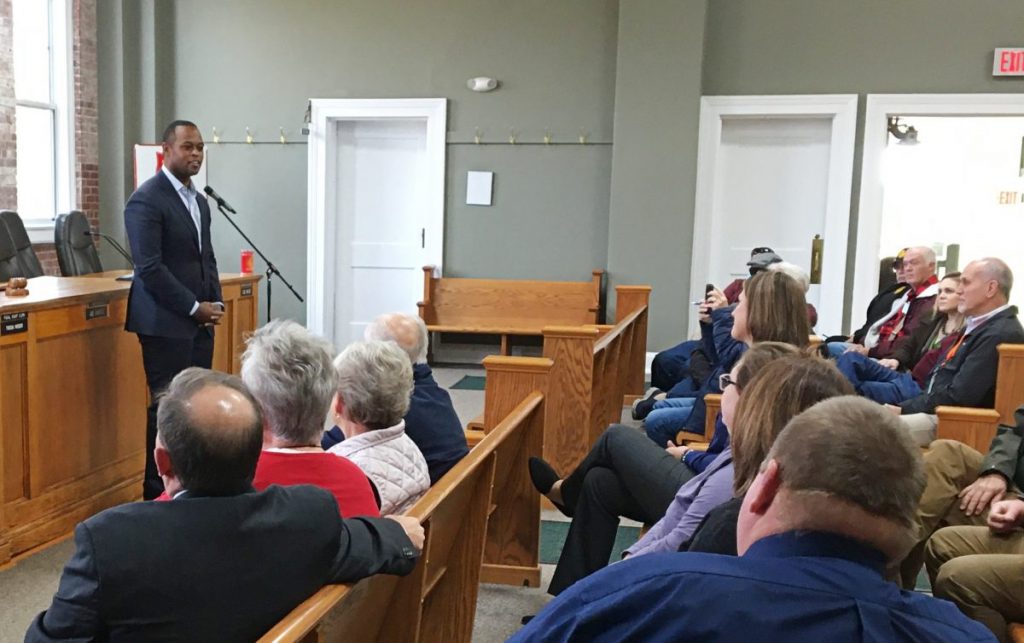 Attorney General Daniel Cameron spoke about the opioid epidemic and the roles of state and federal government. Photo by Jane Marsh.