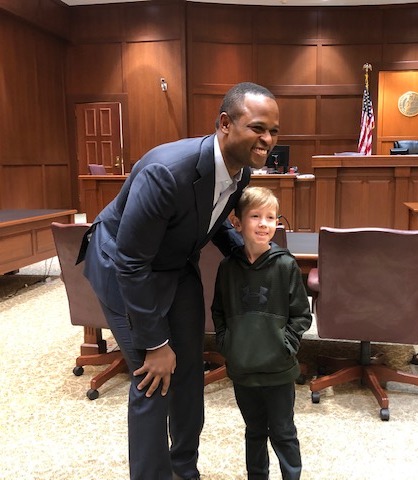 Several Edmonton and Metcalfe officials and a few citizens were in attendance to hear his latest updates on the legal issues involving Kentucky.

Cameron explained the purpose of his county visits, “We are trying to make sure that we are expanding the presence of the AGs office and making sure that you all have touchpoints with our office. I think it’s important for state-wide office holders to be out in the community…just to share a little bit of our vision and our message, but also to hear from you about what’s important.”

His two main topics were the opioid epidemic and the conversation between the federal and state government about state sovereignty.

He discussed the large global settlement that occurred a couple of months ago with several major drug companies for what may be over $482 million. In Kentucky, HB427 (Kentucky Opioid Abatement Advisory Commission) will allot 50% of that money to the state opioid abatement fund, to look at state-wide ways to use that money for opioid issues within the state.

The other 50% goes straight to the counties and cities to be used for each of their specific opioid-based problem/prevention.

“In Kentucky, last year we lost 1,964 individuals to overdoses. Those are sobering statistics,” stated Cameron.

Next, he talked about the second issue, where state sovereignty ends and where the power of the federal government begins.

“The 10th Amendment says pretty emphatically, those powers that are not expressly given to the federal government are reserved to the state,” noted Cameron…. its front and center right now as it relates to the vaccine mandates.”

“And I think, in my view, and I know that there’s a lot of attorney generals across the country that have this view as well. This is an intrusion upon the sovereignty of a state. We refer to the police powers, the powers that are given to a state in terms of the interest and responsibility of looking out for the health and safety and wellbeing of our citizens.”

He went on to say that the Biden administration has been nullifying the rights that are normally given to states. He used children’s school vaccination requirements as an example of a state statutory law, not federal.

“We have been in federal court challenging the Biden administration,” stated Cameron concerning what he views as the federal government’s overreach of vaccine mandates in health care workers, jails, businesses, etc.

The OSHA mandate has been stayed by the 5th circuit and the state is now awaiting word on the federal contractor suit.

Cameron ended with a summary, “Scams and issues with human trafficking are top of mind for us as well and we will continue to work hard on that. Last year we put together what’s called our child abuse prosecution tool kit to help our prosecutors and investigators better prosecute and investigate child abuse cases. There are a lot of different moving parts in our office. A lot of things that we are working through, but I appreciate what you all do on the local level to navigate Covid-19 and the other challenges that you have here in the county.”

Cameron then opened the floor for questions. Only a couple of questions were asked and both concerned the vaccine mandates.

One lady asked if he thought an answer from the lawsuit would arrive before December 6th when she and her 200 coworkers would lose their jobs because of not taking the vaccine, saying she had been a nurse at the same place for 19 years.

Cameron answered, “We’re hopeful that this judge will halt this CMS order and will apply that nationwide…I feel for you.”

Another complimented him for filing lawsuits, saying it was hard to get the correct information and questioning the safety of the vaccines for people with diagnosed immune diseases.

“This is one of those instances in which what we’re doing is having, what is coming out of Washington is having, real-life consequences to folks, especially going into this holiday season. I’m hopeful,” said Cameron. Adding that all of these cases will ultimately end at the Supreme Court. 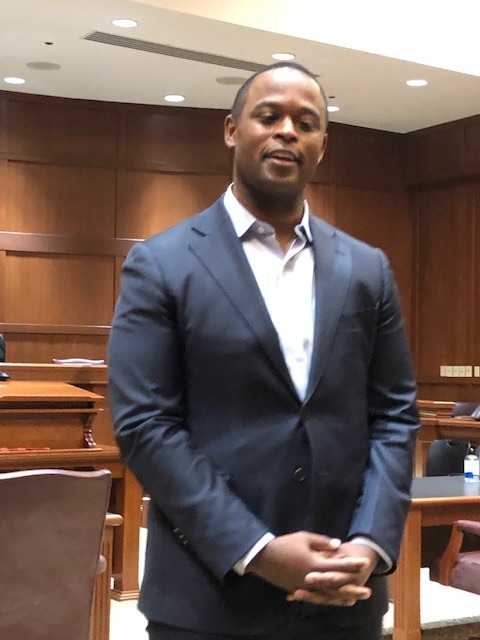 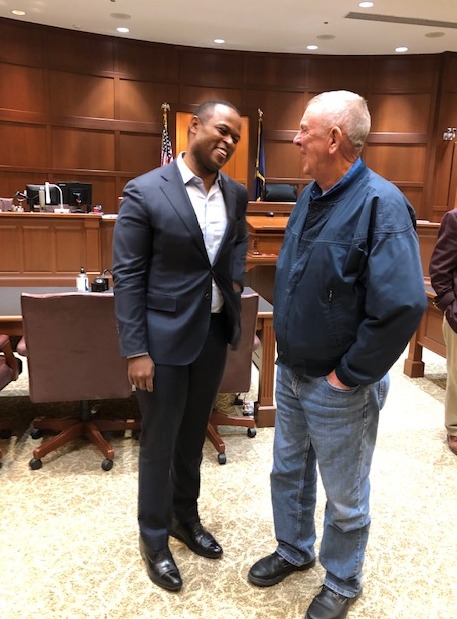 Wood Smith speaking to Daniel Cameron after the event. Photo by PJ Martin