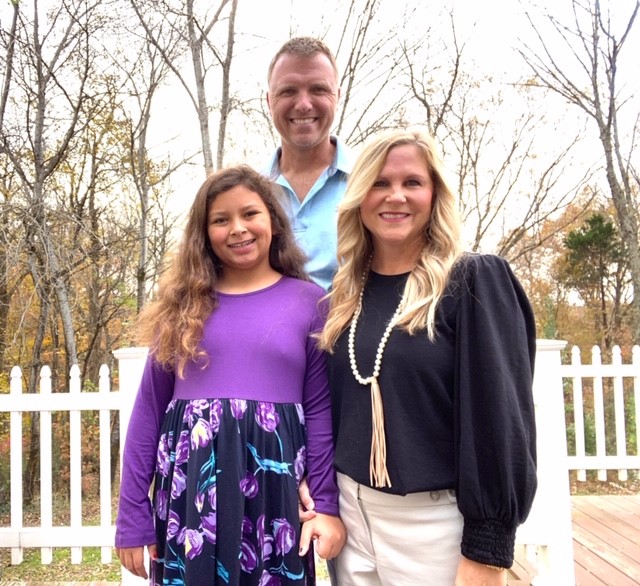 November is National Adoption Month, and for one south-central Kentucky family, adoption has been a blessing.

John and Tracy Miller knew they wanted a family.

“We always knew we wanted to have children. I had watched my husband parent his daughter from a previous marriage, and knew he would be an incredible dad,” said Tracy.

However, it wasn’t as simple as they hoped.

“After years of trying to conceive naturally, rounds of IVF, and surgeries we had to ask ourselves if we wanted to be pregnant, or did we want a family. I am a teacher, so I have loved hundreds of children who weren’t blood-related to me. I knew it would be instant. I was right. The love was instant.”

The Millers had seen adoption work for others. One of John’s brothers is adopted, which was always openly talked about, so the decision was easy.

“We were drawn to adoption and we felt we had a loving home to provide. We were excited about the joy having a child would bring to us,” John said.

Once the decision to adopt was made, the process of becoming eligible to adopt and searching for a child began. Again, it was not easy.

“The process begins with mountains of paperwork. Fingerprints, background checks, financial statements, and interviews. Through Adoption Assistance, we had to conduct a home study. They interviewed us quite extensively.

Our adoption agency held our hands through it all. We had to create a photo book that showed our home, hobbies, and interests for potential birth mothers to look through. We were chosen twice,” Tracy said, recollecting their journey to adoption.

The first outcome was traumatic for the Millers, as the adoption was canceled.

“My sister peeled me out of bed, declaring our motto, ‘Don’t give up.’ We were able to pick ourselves back up and apply again. We were chosen again a few months later, and we dove in again, elated and excited,” said Tracy.

The birth mother chose them from a pool of applicants, so they had the opportunity to know their child from day one.

“We’ve had our daughter since the second she was born. I don’t know how or why it worked out so wonderfully, but it did, and we will always be grateful. We take none of it for granted,” said Tracy.

When I first met the birthmother all parties involved knew it was a perfect fit.

“The five-hour trip to her town was nerve-wracking. We met at the adoption agency. She was a bright light. She was bubbly and warm. She was kind and honest. We instantly connected. She did everything she said she would. I will always love her for that,” Tracy said.

They had a semi-open adoption, meaning that they got to be part of the birth process.

“I love our story. Since we agreed upon a semi-open adoption, I got to know the birth mother on a deeper personal level. The day before the birth, I decided to travel down alone to spend the day with her at the last doctor appointment. The birth mom and I spent the day at the movies, shopping, and eating with her family. It should’ve felt uncomfortable, and awkward, but we were so grateful for each other. That night, John arrived after work and we didn’t sleep. We’d been here before. The next morning, as I held the birth mom’s hand in the delivery room, she told me she loved me. I told her I loved her too, and she squeezed my hand,” Tracy said.

That was the moment that Tracy and John met Raelynn.

“She delivered this beautiful 8 lbs. 11 oz. baby girl with golden brown skin and a head full of black hair. She was perfect,” Tracy said.

“The birth mom gave me a nod to take her and go. John and I did skin-to-skin, and we were treated as though we had actually had her. We spent 2 nights in the hospital, where I hovered over her with so much fear and so much prayer.”

A week later it was declared in front of a judge that the adoption was official.

“We were allowed to return to Kentucky and begin our lives again. We were welcomed with a decorated house, many visitors, and joyful tears. It was such a magical time,” Tracy said.

The disappointment of the first adoption falling through left them wary of making plans for a new baby.

“We brought a baby home from another state without having a crib to put her in. We used a small family bassinet next to our bed, which she very quickly grew out of. My husband, ever the protector, would not allow us to prepare for the upcoming birth. He was hesitant to trust the process again, so when we got home with our sweet baby, the crib was finally ordered and sleepers began to fill the closet. Two weeks later I was attending a baby shower. It was surreal,” said Tracy.

Having Raelynn has been a blessing for all involved. There are, however, challenges. For Tracy, it is making sure, they talk openly and honestly with their daughter about her adoption.

Tracy also spoke candidly about connecting with a child that was not her own biologically.

“Do my daughter and I share the same interests or look the same? Not really. But her passions have become my passions (except for Roblox and youtube). I think that is true with most parents, biological or not. We want her to be a happy, decent, loving person. I know there will come a day that she will seek out where she came from. I think everyone deserves to know where they came from. I will have to be okay with it, and feel assured that she knows I am her momma, and her momma loves her.”

For John, when he thinks of challenges he also thinks of the tremendous amount of support they were given.

“Our community was excited for us. They have welcomed her and loved her just as we have. There are differences, of course, in our personalities or ways of thinking, but I think that’s true in regular families,” John said.

The rewards and joys of being adopted parents have far outweighed any challenges the Millers have confronted along the way.

“I took off work from teaching the first five years of her life. I couldn’t miss anything! I have watched her take those first steps, cut that tooth, squeeze the cat too hard, and of course, I, unfortunately, watched her fall off the bed! I remember rocking her in the night when she had RSV…so scared…like all moms, swaddling her, and thanking the Lord for our blessings. I love her feisty, bubbling personality. I love that she enjoys a lot of things that John and I love, and we get to share that with her. She loves music, crafting, animals, and so much more,” Tracy said.

“The biggest reward for me is being able to share experiences as a family, creating memories. I think it’s neat that Rae thinks differently, because it gives me a different perspective. She is definitely her own person,” John said.

Raelynn, a ray of sunshine, for all who meet her, is as happy about her adoptive family as anyone, but says she has had her own challenges.

“My skin color is different, and I wonder about my siblings and my birth mother. Sometimes I feel weird when I’m asked about being adopted,” she said.

Ultimately, she is thrilled to be a Miller.

“I love my family. I wouldn’t want to be in another family. If I had a choice, I would stay here,” said Raelynn.