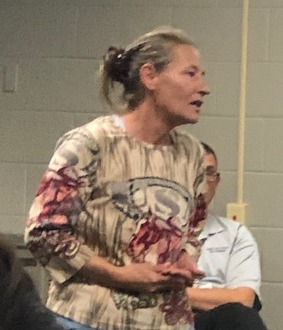 An emotional grandmother spoke about her 5-year old grandchild’s experience at school. Photo by PJ Martin

The problem first came to the attention of the public at the October 22nd school board meeting when Jason and Cynthia Costello spoke up about an issue that occurred with their 15-year old daughter Chloe. According to Chloe, another student had thrown a desk at her in class.

Jason stated that this same student has had confrontations with other students as well. To date, it is unknown if that student has received any punishment.

Jason asked the board members if it was routine policy for a male vice-principal to question a female student alone. He also questioned why they were not notified. He then asked the board if it shouldn’t be every student’s right to be in a safe, violent-free classroom.

None of his questions were answered; He was later contacted and asked to attend a meeting at school the following Monday.

Just days following the meeting, Cynthia was called to the school to pick up their 16-year old son Jack. That is when she learned that bullying had begun earlier when Jack had unbeknownst to them talked to his teacher about resolving a problem with another male student who kept bothering him.

The problem continued until one day, in that same class, the boys argued. The teacher took both boys outside and told them to ‘quiet down and get along.’ After class, Jack went to the restroom where he saw the other boy. According to Jack he then touched the boy’s arm to get his attention and proceeded to ask him kindly to please leave him alone, and the boy then struck out at him and a skirmish ensued.

The boys were taken to Principal Graham’s office and two other students who witnessed the encounter were asked to give statements.

The School Resource Officer (SRO), Josh Neal charged Jack with 4th-degree assault and he was given 3 days out of school suspension and 3 days in-school suspension. The Costello’s have thus far not been told what disciplinary action, if any, was taken against the other student and were not allowed to read the statements given by the other students.

Jason stated that he asked Principal Graham, “Do you see a pattern or is it all coincidence to you? This all come out of one classroom.”

Jason and Cynthia attended the November 9th board meeting asking that the 4th-degree assault charge be removed from their son’s permanent record, fearing this could cause him future problems if he pursued a military clearance. They also relayed their feeling that an assault charge was unwarranted for what had happened. Again no questions were answered, and the charge has not been removed.

Prior to that November meeting, the board changed their meeting process by adding a sign-in sheet for citizens who wish to speak and a disclaimer was added and read aloud by Chairman Joey Shive before any public comment was heard. Here is the disclaimer in its entirety:

A reminder, public comment is not required by law as part of a school board meeting. However, this board wants to hear your concerns and comments. Therefore, at the will of the board we open this time to hear you. Each commenter will have a maximum of five minutes to be heard. This is not a question and answer session. Any lack of civility or attempt to attack individuals or groups of individuals will not be tolerated. At any time, the board reserves the right to exit from public comment and adjourn. Thank you.

Board member Robin McMurtrey set a cell phone timer and Shive told each public speaker that their time was up upon the alarm sounding.

A grandparent in attendance at the November meeting asked to speak to the board also. She related that her 5-year old granddaughter was suspended from kindergarten for making a threat to a fellow student. According to the grandmother, the child heard another child on the school bus doing the same, and repeated it. She stated that the child said, “she was gonna kill him because he pushed her, or kicked her, or something.”

She related that the 5-year-old was questioned without her mother present and referred to the school counselor. The counselor was unavailable so her mother took her to a counselor for a mental health evaluation.

The grandmother stated, “She was suspended from school. She was told she couldn’t come back until she passed a mental evaluation and was deemed safe to return to school, she wouldn’t be a hazard to no other child.”

“So my daughter took her and everything was passed and they said she would go back to school. They didn’t think she was a threat and all that. And she did go back to school, but she was suspended. You know what I’m wondering. Is that on her record?”

“Somethin’s going on…this baby right here said something she heard on a bus, other kids talking, and was suspended as a threat to children.”

The Herald-News reached out to Metcalfe County School Superintendent Josh Hurt who provided us with the following statement:

We appreciate feedback from the community and value public comment. However, under federal privacy laws, the board is not allowed to publicly discuss specific student disciplinary actions. Discipline procedures are outlined in all of our school handbooks which are available on our website www.metcalfeschools.com. Our administrative teams at each building and at the central office are always happy to visit with anyone about individual concerns.

The Herald-News also reached out to SRO Josh Neal and he provided us with this statement.

“I want to let the students of Metcalfe know that I care about them and I want to do the best for them. I agree with the statement by the school and we are not allowed to speak openly about private matters.”

Since Neal’s statement, he has offered his resignation to the Metcalfe County School system. 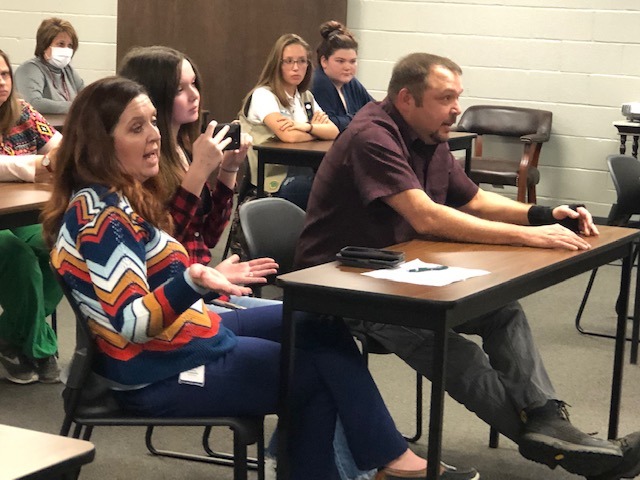 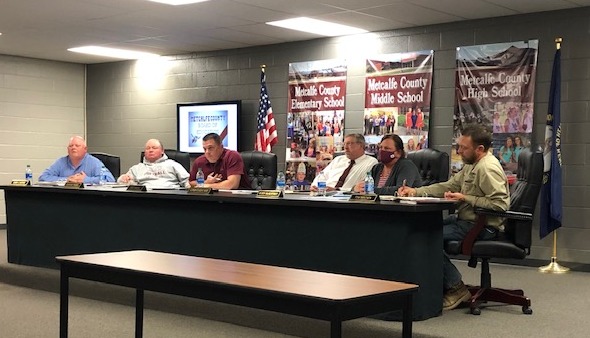