Hale pushes for one-time payouts for 133 county employees of more than $1.5M; totals to some exceed the federal limits set in program

Barren County Officials deliberated for nearly an hour in Fiscal Court after Magistrate Carl Dickerson called for a revote regarding the premium pay approved for county employees in October.

“I voted in the affirmative for premium pay in the October 19th meeting,” Dickerson stated, “Things have come to my attention…I am calling for a revote.”

Magistrate Trent Riddle made the motion, seconded by Magistrate Tim Coomer, which opened the floor for discussion.

What is Premium Pay?

“Premium pay” is the term used to reward employees with monetary reimbursement payments from federal money in response to the COVID-19 pandemic. On March 11, U.S. President Joe Biden signed the American Rescue Act Plan (ARPA) into law to provide direct federally funded aid to counties, as well as other entities, across the country. Premium pay isn’t required, but a recommendation by the federal government.

On 10/19/21, Barren County Fiscal Court approved a pie chart that was presented by County Treasurer Jenny Hoffman and newly-contracted Krista Steenbergen (who the County hired in that same meeting to assist with the ARPA funds and federal regulations). According to Hoffman, a report had to be submitted by Oct. 31.

The pie chart was repeatedly explained as a set of “fluid” goals the county could consider using the ARPA funds for except for two items that would be a solidified decision within the same motion. Those items included Steenbergen’s hire with administrative pay (1%) and premium pay (18%) for county employees.

The premium pay was voted to be $5 per hour worked from 1/27/2020 through 9/3/2021. Qualifying hours are for hours only worked while physically at their job locations. Vacation, COVID-19 related quarantines, zoom calls, and work from home hours were not to be considered as hours worked for the premium pay.

Coomer was the only magistrate to vote against the item in October citing he needed more time to consider everything. Magistrates Riddle and Mark Bowman were absent. 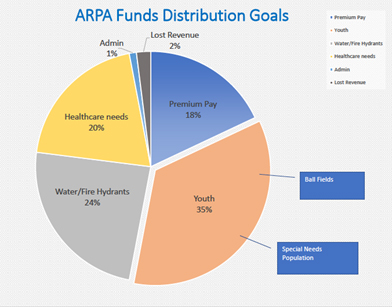 A “fluid” pie chart presented to the Barren County Fiscal Court regarding the American Rescue Plan Act funds that was approved in October. This chart, as of November 16, will face a revote in the near future.

At last week’s meeting, Magistrates questioning the premium pay issue made it clear they weren’t opposed to paying county employees premium pay nor the 18%, but how the money is being divided and how the October vote was rushed posed issues for them.

Riddle asked, “What happened with the deadline on the 31st of October?”

Steenbergen replied that was the original date for reporting to the federal government, but a deadline extension was moved to 1/31/22 originally, but that has now changed to April 2022.

A day prior, in the Administrative and Budget Committee, Treasurer Hoffman admitted she had missed an e-mail for the deadline extension by accident and that she “would never withhold information like that from the court.” She said she discovered the extension on Oct. 29 when logging onto the treasury website to complete her report for the Oct. 31 deadline.

Dickerson said he came across this e-mail by accident after requesting a copy of regulations from someone.

“Come to find out, we had an extension sent here September 20th” and the e-mail went unread, Dickerson said, leaving the voting court unaware they actually did have more time to consider discussing more details surrounding the premium pay in October. Steenbergen told the Court it was her responsibility and she somehow missed that e-mail.

A Kentucky Association of Counties (KACo) news update was posted to their website dating Oct. 1 detailing the extension as well.

The BCP confirmed with KACo after the meeting that this news update would have been sent out directly to elected officials in their weekly newsletter circulation via e-mail.

However, if officials are unsubscribed from the newsletter, they would not receive it. KACo confirmed the National Association of Counties also sent out a notification via e-mail. 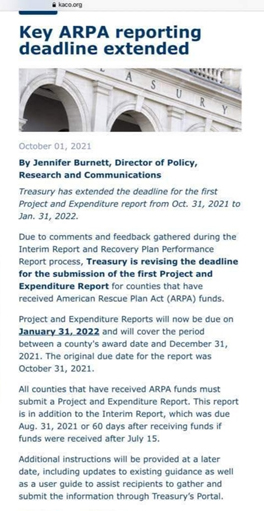 Screenshot from the Kentucky Association of Counties website dated Oct. 1, 2021 with information regarding the ARPA reporting deadline extension.

Hale agreed with Dickerson regarding the e-mail and often voiced his support for leaving the premium pay vote as approved in October as a way of saying thank you to county employees.

Riddle said he can only speak for himself regarding the details of the matter.

“There’s some details that need to be worked out,” Riddle said, “It feels like it happened awful fast and that e-mail was in the office from a federal government 19 days prior to that [October] meeting concerning millions of dollars.”

Coomer elaborated on his prior decision saying he wanted people to understand why he voted no:

“This was laid on me just as the meeting started and that’s not the way to do business. I’m not against giving employees a bonus, I’m against the way it’s being done and who is included and who isn’t included.”

Coomer included, as an example, high school and college kids who work part-time for the county being included in the premium pay.

“I didn’t realize they were, and hey, that’s on me,” Barren County Judge/Executive Micheal Hale replied, “So we go back to the drawing table on that.”

Coomer said he was supportive of the 18% to county employees; however, his issue was some of those checks would amount to more than $24,000 for some employees. He said, “… These amounts are ridiculous.”

At one point, Hale asked why the court would wait to address these issues.

Coomer said he felt the same regarding the premium pay vote in October.

“What I’m going to say is the same reason I knew nothing about this until the morning we had to vote on it,” Coomer said, “I sit and talk to you and Jeff Botts for 30 minutes before the meeting and y’all never mentioned we were getting ready to give our employees 1.6 million dollars and I had to vote on it just like that.”

Coomer said he was commended for voting no in October by other county judges at a conference. He added, “A lot of judges said they give their employees $1,000, $1,500 apiece, and some of them are not giving them anything, which I think is bad.”

In comparison, the BCP confirmed Warren County paid their county employees the same premium pay amounts across the board. Workers who were employed by the county on March 1, 2020, and are still employed, are eligible to receive bonuses of up to $2,500 for full-time workers and a prorated amount for part-timers.

In addition, people employed by the county on Sept. 1 who are still employed on Dec. 31, 2022, will be eligible to receive the same amounts in a second round of funding.

This would bring the Warren County government employee a total of up to $5,000 “premium pay” or bonus to be paid over two years.

The plan presented before the court from the Barren County Judge’s office is to pay eligible employees a compensation package valued up to $36,082 and one-time checks written before Christmas 2021.

At one point Dickerson asked for a confirmation that county employees had been paid all monies owed for their service during the pandemic. It was confirmed.

Hale said giving employees the premium pay would help circulate the money through the community helping local businesses although no comments had been made suggesting something would not be given to employees.

The court approved to reconsider October’s pie chart and premium pay, which is anticipated to take place in a special-called meeting.

Magistrates Dickerson, Coomer, Bowman, Riddle, Kenneth Sartin, and Billy Houchens voted in favor of retracting last month’s decision. Both Magistrates Jeff Botts and Hale voted against the motion in support of leaving everything as it had been approved in October and pushing for a quick payout.

The federal guidelines for premium pay are not to exceed an aggregated amount of $25,000; yet the 44-page document provided by the county shows several suggested payouts above the threshold with top payouts of $36,082.50.

The document lists each eligible county employee and a breakdown of how much they’d receive (gross and net) as well as the hours worked, and any retirement-type benefit amounts.

What Can ARPA Funds be Used For?

There is an extremely broad range on what the federal government allows entities to spend their ARPA funds on.

Barren County will receive a total of $8,594,850.00 of ARPA funds in two separate payments over 2-years. The first payment has already been received.

According to the U.S. Treasury website, a small fraction of those items which have been negatively affected by the pandemic can include county revenue loss; large range of medical services such as vaccination programs and ventilation improvements; restoration of pre-pandemic unemployment trust fund account; assistance to households for food assistance, rent/utility assistance, and even internet access; small business and non-profit assistance; direct cash transfers to households; impacted industries and tourism/hospitalities; and several services for low-income families and addressing health disparities, child care, and foster youth.

The list is exhaustive and among each item, the federal government has listed regulations to abide by and proper compliance will be required to secure future payments. Look for more on how other counties are using their funding in future issues of the BCP. 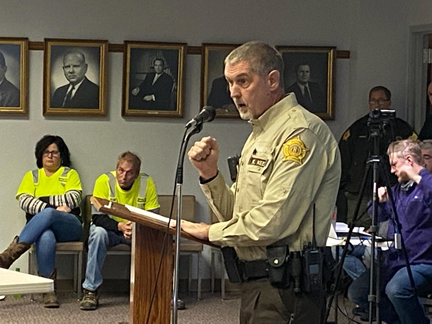 Barren County Sheriff Kent Keen told the court regarding the premium pay, “This is a one time opportunity for fiscal court to reward county employees…I have to ask the question to clarify for my employees because in my definition you are posturing yourself not to reward the employees. If you tell me that you need time, okay, I’m good with that.” Magistrates told Keen the matter was still on the table. Photo/Jeff Jobe 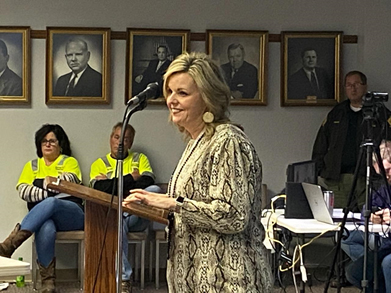 Barren County Clerk Helena Birdwell discussed how the COVID-19 pandemic affected her employees and at one point, had only three employees available to serve citizens. “We kept things going, got creative working for Barren County so we’d have revenue to turn over and we haven’t missed our marks yet.” Birdwell asked the court to “promise” her that for her employees a special meeting would be held to “do what we’ve already told them we’re going to do.” Photo/Jeff Jobe 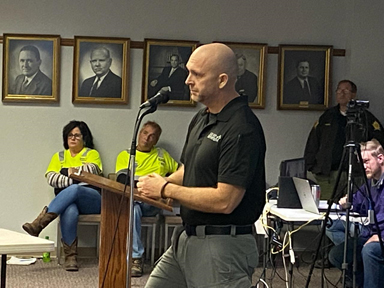 Barren County Jailer Aaron Bennett spoke on perseverance of all county employees during an unexpected pandemic. Bennett had 18 employees absent at the same time a few months ago. Regarding the premium pay, Bennett said, “I understand rushing this, but I guess my problem is today we just told a bunch of county employees they’re looking at $25,000 they’re not worth that.” Photo/Jeff Jobe 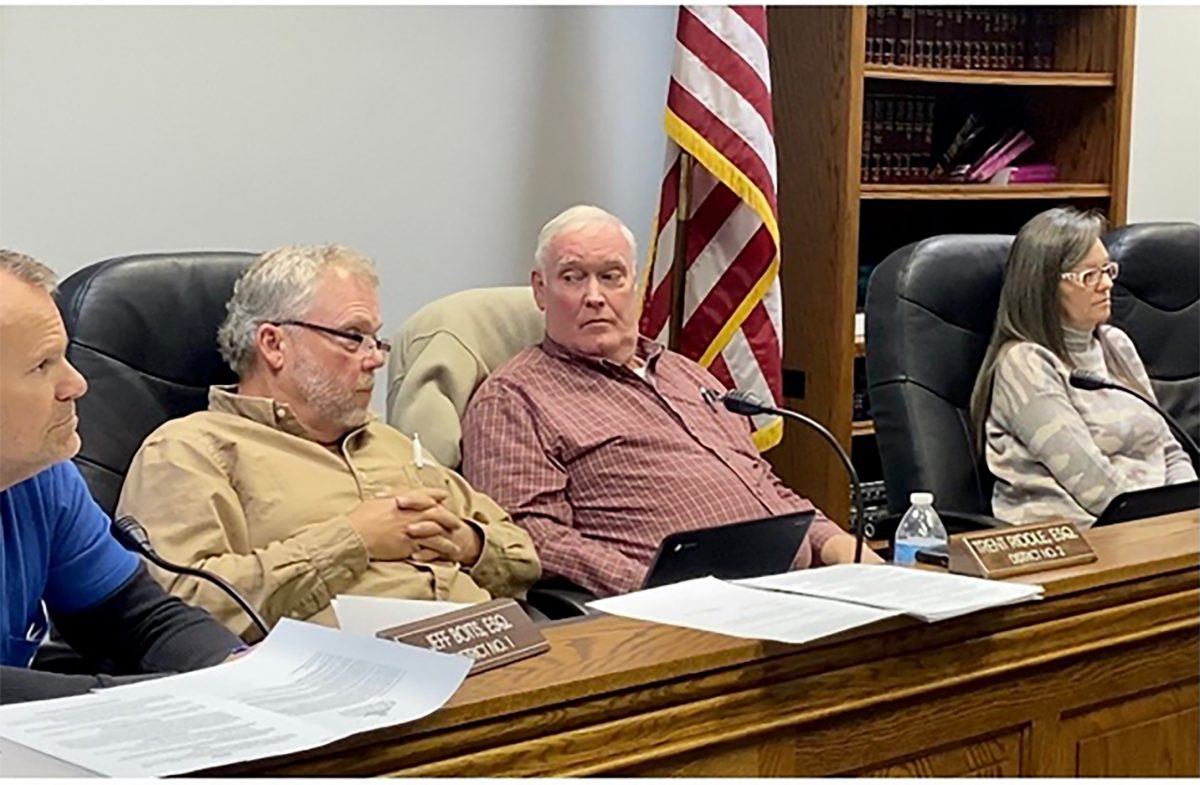 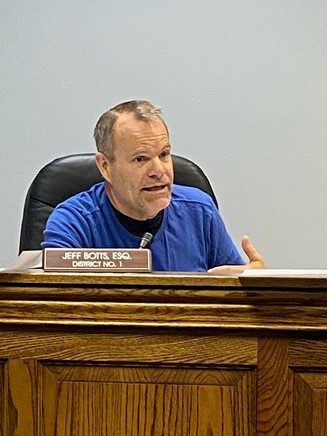 Magistrate Jeff Botts and Chairman of the Administrative Budget Committee admitted the ARPA funds and premium pay was rushed in the October committee. However, Botts said regarding the premium pay allocations, “There’s no way this can be fair no matter what we do.” Photo/Jeff Jobe