Barren County has not complied with their own procurement policy or state statutes in regards to securing bids for renovating the county owned courthouse located at the center of downtown Glasgow.

Their policy is defined in Chapter 34 of the Barren County Code of Ordinances.  It mirrors the procedures identified in Kentucky Revised Statutes; The judge-executive shall place an appropriate advertisement in the newspaper of the largest general circulation within the county, and shall open all bids publicly at the time and place stated in the advertisement.

No public bidding and specifically no public bid details were advertised nor discussed in open Fiscal Court meetings since the Barren County Progress has maintained the public record of the KRS requirements.

When the judge-executive was asked for copies of advertisements ran perhaps at an earlier time prior to the BCP becoming the county legal publication source we were referred to the Fiscal Court Clerk Sherry Jones and the building committee chairman Magistrate Tim Coomer.

Jones shared in an email, 1.  Attached are copies of all quotes furnished to the Kentucky Administrative Office of the Courts on AOC Form “Work Order Request” on August 26, 2021, and September 20, 2021.  2. On September 22, 2021, the Kentucky Administrative Office of the Courts notified Barren County Judge-Executive Micheal Hale with a “Nonrecurring Project Approval Letter” acknowledging the receipt of the quotes and giving approval for the County to “proceed” with the project at the estimated cost of $66,503.00, 100% funded by AOC.

No advertisement for the bidding maintenance of the Barren County Courthouse has been requested.

It is the judge/executives understanding that he wasn’t required to bid this publicly because it is a project 100% funded by the Administrator of the Courts (AOC) and he only had to provide quotes.  Hale said, “They are paying for this, only asked for quotes and the quotes were given.”

Magistrate Coomer said; “Bids were given to the building committee by courthouse maintenance supervisor, Dennis Proffitt.”  This is the name two of the bidding companies indicated had called and asked for bids.  They said they were told Michael Hale was wanting them to submit a bid.

Coomer concluded, “I’m not aware of any advertisement but I had just assumed it was done the right way.”  He added, “I assure everyone, if it wasn’t, I’ll make certain I never open a bid or vote again without knowing it has been done the right way for sure.”

Hale confirmed he had asked Proffitt to seek the bids.

Upon reaching out to the AOC through our press association we received the following response:  “Local units of government own court facilities throughout the state. These local units of government, typically counties, are responsible for maintaining the facility. The AOC pays counties quarterly “operating costs” payments, which are payments advancing costs for utilities, janitorial expenses, insurance, maintenance, repair and upkeep of the facilities. Per the AOC Policy for Operation and Maintenance of Court Facilities, found here, (website) all projects for maintenance and repair of court facilities exceeding $2,500 are “nonrecurring projects.” Quotes are discussed in the section entitled “Initiating a Nonrecurring Project Request” on pages 26-27 of the policy.”

The email continues explaining: “These nonrecurring projects are local projects. However, because the AOC reimburses counties for the Judicial Branch’s proportionate share of the costs of nonrecurring projects based on the percentage of the facility that is occupied by the Kentucky Court of Justice, counties are required to obtain quotes and submit them for approval of the AOC before undertaking the project. Although the AOC approves the cost of the project in advance, AOC approval does not indicate that a county complied with its own procurement policies.

The email concluded.  “In addition to the requirements of the Policy for Operation and Maintenance of Court Facilities, a county should follow its own procurement policies. If it is required by its own policies to solicit bids rather than simply obtain quotes, then the county should solicit bids and provide the bids to the AOC for approval of costs prior to accepting a bid.”

Jones was asked who advised the county on not needing to place legal advertisement in compliance with their own procurement policy and she responded; “I am copying County Attorney Thomas and requesting her response to your last inquiry.”   Kathryn Thomas responded, “I was not consulted.”

Thomas continued, “When a project exceeds $30,000.00, Barren County’s procurement policy requires an appropriate advertisement for bids be placed in the newspaper with the largest circulation within the county. Although Barren County is being reimbursed by the Administrative Office of the Courts for 100% of the courthouse repair project, the procurement policy should have been followed. Clarification on this issue will be given at the Barren County Fiscal Court’s Building & Property Committee Meeting on November 2, 2021, and also at the regularly scheduled monthly meeting of the Barren County Fiscal Court on November 16, 2021.” 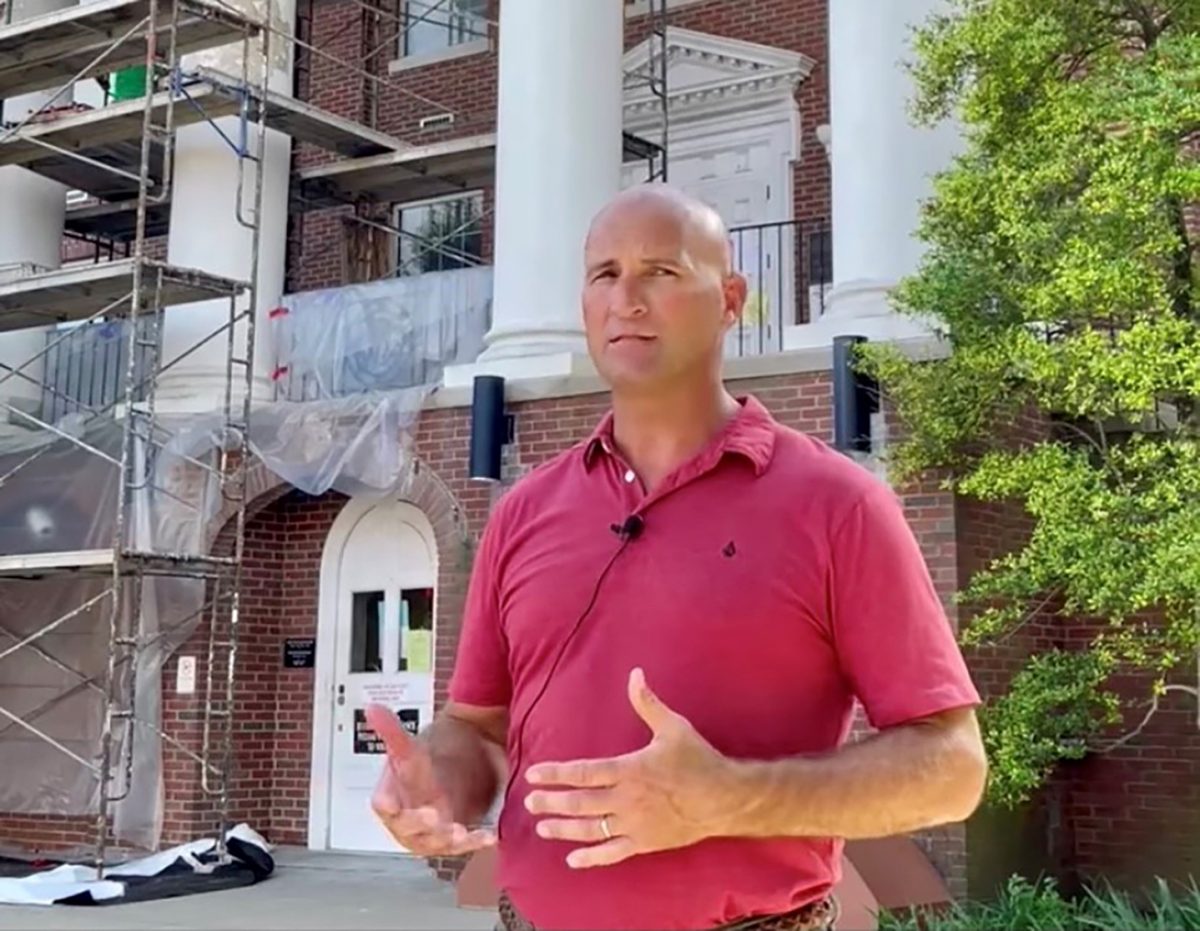 Judge-Executive Micheal Hale speaks on video he released telling Barren County he will be doing it right in regards to the renovation of the Barren County Courthouse. His definition of the process can be found on Barren County Facebook.
Photo taken from video released on October 14, 2021.