At the podium, Tug and Cyndi Rillings spoke of the “deplorable” conditions of Chess Jessie Road, stating they ran three businesses from their home, were disabled, and had to travel to and from multiple appointments each week. Also pictures are Dan and Rene Hathaway waiting their turn. Photo by Jennifer Moonsong

At the regularly scheduled meeting of Metcalfe County Fiscal Court on October 26th, the agenda was straightforward and brief. The court approved the ARPA Fund Expenditure Resolution and appointed Ken Childress and Lisa Beasley to the extension board.

However, when they got to “other business” chaos ensued when a group of citizens from District 4 complained about the deplorable condition of the rural roads they live on.

Cyndi and Tug Rillings were the first to speak. They live on Chess Jesse Road and say that they have asked for repairs for over five years.

“They come out, and there’s always an excuse. They have patched it, but it washes away,” said Cyndi. “The Road is in desperate need of repair.”

The Rillings family claimed that there is a 30-foot long trench is approximately 10 inches deep along the road.

“Both of us are disabled and we go to the doctor four or more times a week,” she said. She added that although disabled they operate three businesses from their home and that it was difficult for delivery persons and customers.

The Rillings stated that they pay taxes on two properties, and feel it is the county’s responsibility to pave the road.

Stilts explain the plight of the county.

“We have over 400 miles of county roads to maintain and a limited budget,” said Stilts. “We have made repairs to the road.”

He also stated that it cost $85,000 to pay for each mile of roadway and that it was simply not in the county’s budget to do so. Especially considering that the county is still paying for a water line run to the property, a decision made by the previous administration.

“We are doing the best we can with every road in the county,” Stilts said, who notes that as a byproduct of the pandemic, the county road fund was cut $200,000.

Both the Rillings and other citizens present addressed Ronnie Miller specifically.

“My road is in a worse condition than yours, and I don’t expect the county or the court to take care of it,” said Miller.

Having seen the road several times in person, Miller stated that he could not picture that it was impossible to pass the road, and suggested they purchase a four-wheel-drive vehicle to navigate the roadway.

“I shouldn’t have to upgrade my vehicle,” said Tug Rillings.

“I take your calls every day,” said Miller.

On one occasion the citizens present clapped in support, and on another, the judge pounded the gavel to maintain order.

“As disabled taxpayers, the road is not fixed and it is not suitable. We have heard promises and we want what was promised to us,” said Cyndi.

Judge Stilts noted that there had been no promises unless it was prior to his tenure. They mentioned that Bobby Bunch had made promises, and he stated that Bunch was no longer with the road department.

“I was promised chip seal,” he said. “I’ve heard promises for ten years. Ronnie, do you remember?”

A citizen in the crowd said, “He’s not even listening he’s on his phone.”

Stilts then noted that the rainfall of the past two years had added to the problems and said, “You cannot control Mother Nature. I haven’t promised anything, and I do not know what the previous administration may have promised you.”

Stilts and County Attorney Barry Gilley also described the process and function of the Fiscal Court.

“All of the magistrates in the state are appointed to vote on matters that come before Fiscal Court on the agenda,” said Gilley.

“We are here to help the county as a whole not you as an individual,” said Stilts.

Even after fiscal court adjourned, conversations amongst the angry citizens continued in the chamber, in the hallway, and the parking lot.

The group of citizens stated that they were going to find someone to run against Magistrate Miller in next year’s election. 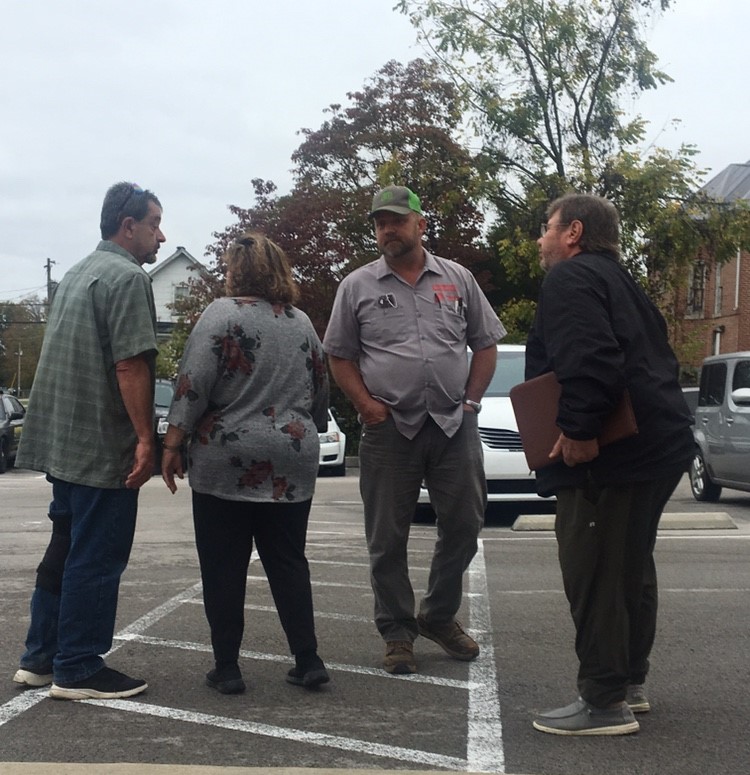 Dan and Rene Hathaway and Daniel Thomason continued complaining of rural road conditions to Magistrate Ronnie Miller in the parking lot. Hathaway states he has money and plans to sue. Photo by Jennifer Moonsong