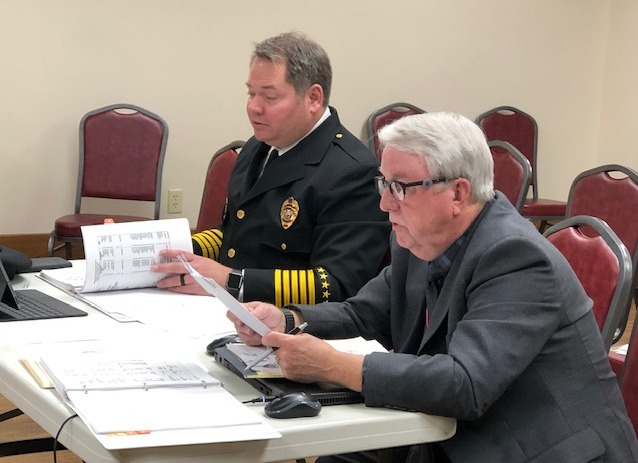 The Barren-Metcalfe Emergency Medical Services Board of Directors met in regular session on Wednesday, October 27th in the Metcalfe County fiscal courtroom. Judge/Executive Michael Hale had notified Executive Director Joe Middleton that he was unable to attend the meeting and Mr. Neil Thornberry arrived just after the meeting began.

Attorney Brian Pack requested to have his sections of the agenda moved up due to having to leave at 4:30 p.m. The board voted to amend the agenda to allow this and began the closed session immediately to discuss property acquisition and personnel.

After returning from the approximately 40 minute closed session, Director Jackie Brown made the motion to, “Give the authorization to our Executive Director with legal counsel to proceed as directed by the board regarding the land acquisition.” The motion was seconded and the board approved. No other information was forthcoming.

It was noted that employees who have under one year in their position will receive the increase upon completing one year if it falls before June 30, 2022. As of July 1, 2022, raises will be merit-based and performance reviews will be performed.

The collection agency contract is up for renewal. Historically, Fox Collection Center of Goodlettsville, TN has been used, but a second option Hillcrest Credit Agency of Bowling Green, KY was discussed.

Fox Collection Center receives 30% for collection, if a case goes to court it is 40% of what is recovered with 60% paid to BMEMS who then pays a set dollar amount for legal fees.

Hillcrest Credit Agency receives 25% for collection the first 30 days which goes to 30% afterward, and legal fees are 50%, however, legal fees are paid from what is recovered and then the remainder is divided 50/50 with the BMEMS.

After much comparison discussion, Hillcrest Credit Agency was selected as the new collection agency.

The CMS rate schedule increase will be 5.1% on January 20, 2022. “This is a significant increase. Those CMS rates have to do with what we are reimbursed from Medicare, Medicaid, and all of our contracts are based on CMS rates. We should glean a little bit increase in collections on that,” stated Middleton.

Executive Treasurer Steve Powell advised that the August billing was still down about 4% while September was down 2.5%, however, he noted that they were notified by the billing agency of a software breach which took their system down September 22nd until midday October 1st, so no billing was processed. Powell gave an update from the agency, “still 3 days behind, but they are catching up. They hired more people.”

Assistant Director Garland Gillian acknowledged that run volumes have steadily increased across the board citing a total of 7,857 runs year-to-date.

The monthly runs by county for August were Barren 751 and Metcalfe 146, while September had 797 and 158 respectively.

“Response times are still hanging under 10-minutes…we’re proud of that,” noted Gillian.

Gillian also advised that a competition between shifts (A, B, C, and D) for the scene times had begun. “We are targeting that 10 minute scene time if at all possible. Now, that’s not always possible.”

The ambulances with high mileage are requiring more maintenance and that is associated with higher costs.

Middleton presented a request for a proposal and the specs for the purchase of three ambulances. Last year only 1 of 2 were replaced so that total the need for 3 this year. Bid prices will be good for 180 days. The board approved the request and bids will be opened at the December 8th board meeting.

The surplus 2017 Ford ambulance was sold for $10,000 and that money was used to pay off the 1st note and pay on the principle of the 2nd note held by the ambulance service. Treasurer Powell had previously stated that an extra $20,000 had been paid above what was due on the notes. $10,000 from the sale and $10,000 from a grant received (SB1) from Barren County each year.

The surplus 2009 Crown Victoria had received no bids and the board agreed that the best option was to sell it at the next county’s auction.

The Med ED Cadaver Lab was held on October 28 and 29. Middleton advised that the 2 cadavers had arrived along with the doctors responsible, Dr. Kara Gilkey and Dr. Kyle Kiser were on-site to assist with certification and training in surgical procedures.

The board was happy to announce that Executive Secretary Mrs. Connie Taylor and Mrs. Stevie Pettit had both completed the Certified Ambulance Compliance Officer training and both are now certified. This saves the service approximately $12,000 per year.

The amending of board member terms to be staggered over 4 years was discussed, but tabled until the next meeting.

The next meeting is scheduled for December 8th at 4 p.m. at the Barren County fiscal courtroom.