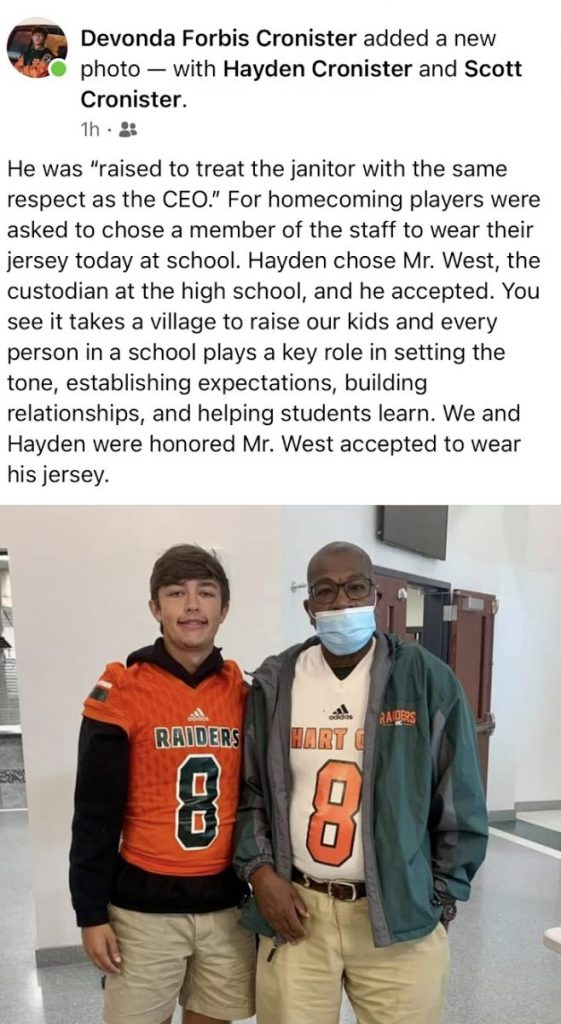 The football team went a step further, with players reflecting on the educators who have made an impact on them and asking those staff members to wear their jerseys for the day.

“This was an idea I came across last year on social media and hope to continue to implement this in our program to build our school spirit and connections between staff and players,” said Head Football Coach Chad Griffin.

Sophomore Davey Williams was the first one to reach Freshman ELA teacher Angie Barbour, though he was not the only student to ask her.

“When Davey asked me to wear his jersey, it was definitely special,” said Barbour. “You never know the impact you have on a student until moments like this. It was a reminder to me that students don’t forget what we say and do for them. It was such an honor to be asked because he could have asked anyone, and he chose me!”

“I was definitely honored when Kaden asked me if I wanted to wear his jersey,” said Laurie. “Given the craziness of the last few years, it’s been harder to make connections and build relationships with our students. Jersey Day was a reminder that those relationships are important to build, and that all the little things along the way do make a difference.”

Lori Chaney echoed the sentiments of her coworkers, saying “Being asked by Brenan to wear his jersey was very special. Building a positive relationship with my students is extremely important, and this was an excellent reminder to me that students also value these relationships.”

Making differences in the lives of students is an ultimate goal of any educator, but classroom teachers are not the only staff members who have profound impacts.

“Everyone I talked to picked their favorite teacher or coach,” said Cronister. “I felt someone like Mr. West was the person I wanted to represent my jersey. I always see him working, and when he’s not helping others, you might even catch him getting some shots in with other classmates.”

West accepted and when he told Cronister he had once been a quarterback, it reiterated the reasons Cronister chose him in the first place.

“It just brought me back to how much he reminds me of quarterbacks in our present-day quarterback role,” said Cronister. “The quarterback throws a perfect pass and hits his wide receiver who gets all the glory for it. Just like in school, all these teachers and principals that you see every day, you remember. But the janitor who cleaned all morning and night to make sure you’re learning in a clean environment that you might not see every day is who stands out to me.”

Hayden’s mother, Devonda Cronister, was honored that Mr. West accepted Hayden’s jersey. “You see it takes a village to raise our kids,” she said. “Every person in a school plays a key role in setting the tone, establishing expectations, building relationships, and helping students learn.” 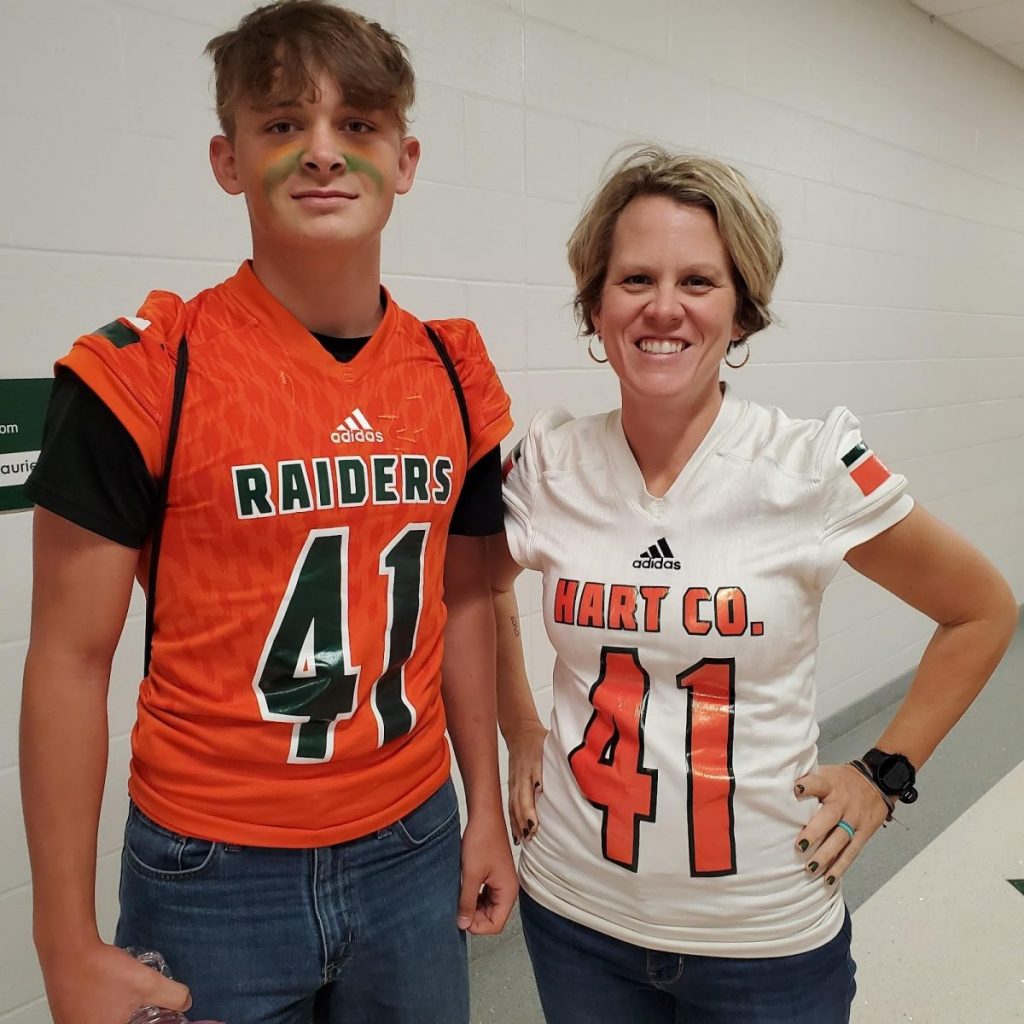 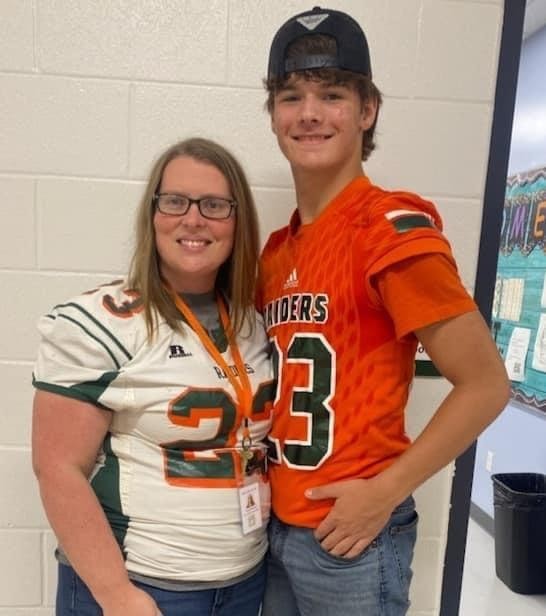 Varsity Football players asked a teacher to wear their jersey for the day. Pictured are Angela Barbour and Davey Williams. 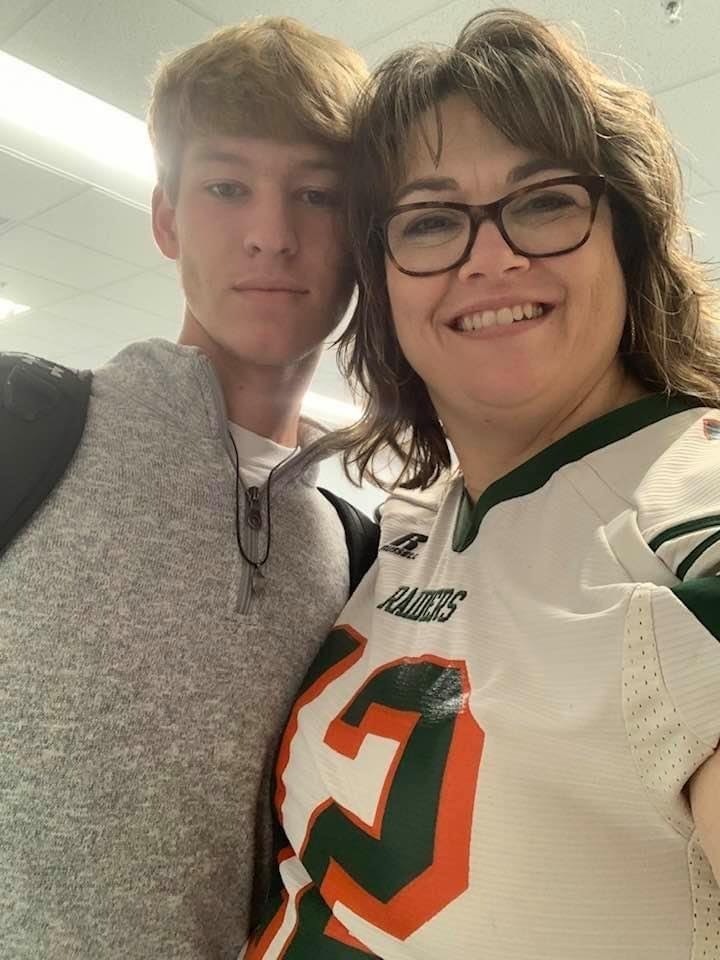 “He asked me to wear his jersey for Homecoming today, and I did it proudly,” said ELA teacher, Bobbi Taylor, of Junior Jacob Mabe. 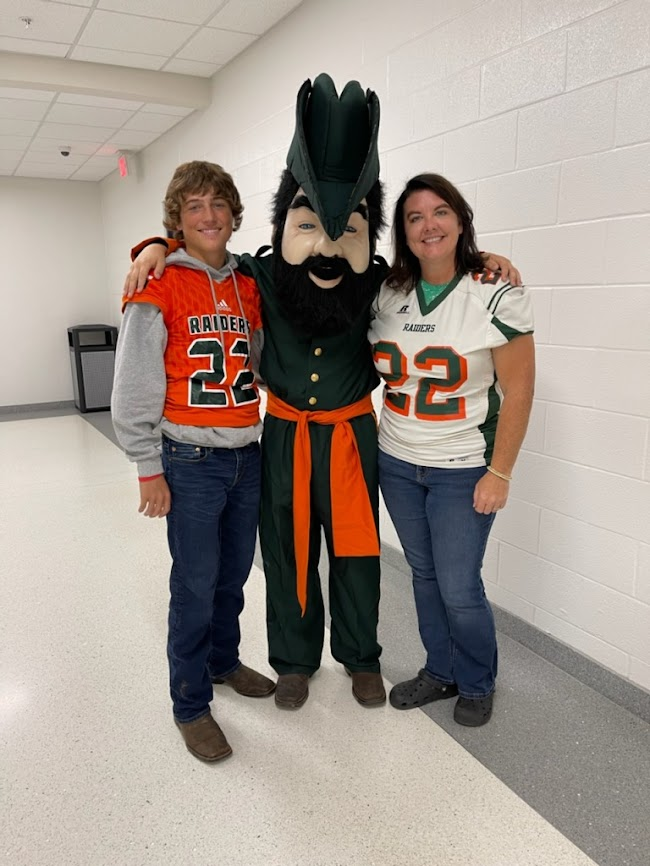