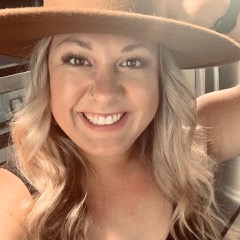 Brooke Binkley is a domestic violence survivor. Her book, Firecracker, is a memoir about her experience. Photo submitted.

“For years, he underestimated me. But, I was not stupid. I was not needy. I was not unstable. I was not undeserving. I was not asking for too much and I was not his property. And, on February 28th, 2020, he figured that out the hard way.” Excerpt from the book, Firecracker

Brooke Binkley has always had a self-declared strong personality. As a middle schooler, Brooke’s uncle described her as a “firecracker”, a term that had stuck with the Kentucky native even into adulthood.

On the outside, Brooke was seen as the resilient mom blogger sharing her funny stories with other moms across the world. But behind closed doors, Brooke was experiencing nearly every form of domestic violence that existed.

How could someone once described as a firecracker become a victim of physical, financial, emotional, and sexual abuse?

“I talk about the different types of domestic violence that I experienced, and I share very raw stories of the things that I endured during my marriage,” Brooke said. “I also share about how I planned my escape for six weeks to safely get out.”

Brooke met her abuser in 2014 when she was a single mom. Within two months, the emotional abuse began without Brooke even realizing it. Within four months, Brooke was hospitalized for domestic violence-related injuries, and her abuser was charged with unlawful imprisonment and assault. Those charges were accompanied by a no-contact order, which was violated and her abuser was arrested once again.

Unfortunately, Brooke was already trauma bonded to her abuser and reconciled with him. Shortly after, Brooke became pregnant and was determined to make the relationship work. They married within nine months of dating while Brooke was pregnant. In 2017, Brooke and her abuser/husband relocated to Tennessee. The abuse continued to escalate.

“I was not allowed to leave my abuser, and he would often take my keys from me, lock them in his gun safe, or physically stand behind my car if I tried to leave,” Brooke recalled. “He then began strangling me on a regular basis.”

One of the things that Brooke struggled with the most during her abusive marriage is how it impacted the last few months that she had with her mom. Brooke’s mom was diagnosed with stage 4 cancer on November 30 of 2018. During that time, Brooke’s mom was often hospitalized due to complications with chemo and the cancer itself.

“The last time that I was able to see my mom in person (while she was still coherent), my abuser had picked a fight with me for going to see her,” Brooke said. “I spent my last visit with her crying over what my abuser was saying to me, and instead of consoling her, she was consoling me. That next time that I saw her, end-of-life delirium had set in. I carry a lot of guilt over not being there for her more during this time, but I was convinced that I needed to be at home and I was struggling to find the balance.”

Brooke’s mom passed away on February 20 of 2019, just three short months after her cancer diagnosis.

For many years, Brooke never called the police on her abuser out of embarrassment and denial.

“It’s hard to explain, but many people describe domestic violence as being in a fog,” she said. “You know that your relationship is not good, but you don’t realize that it’s abusive…Oftentimes, I would find myself telling someone a story about something that had happened, and it was only after I said it out loud to someone (and saw the horror on their face) that I would realize that it was abusive.”

But, after the abuser’s behavior during her mom’s short battle with cancer earlier that year and as things continued to escalate, Brooke finally called the police in December of 2019. However, the police could not offer help because she and her abuser were still married and did not have a parenting plan. On that day, Brooke made the ultimate decision.

“Even as I was planning my escape, I didn’t fully understand that I was a victim of domestic violence,” Brooke said. “I even had a friend suggest that I try to get into a shelter, but I told her that shelters were for domestic violence victims. She responded with, ‘I know’. And I’ll never forget that moment of realization.”

“For six weeks, I got my things in order so that I could leave safely,” she continued. “I set up a secret bank account, email address, etc. I got a second phone that I kept hidden in our home. I shipped some of my belongings to a safe place. I let a couple of people know what was going on, and then I packed my car up one day after sending my abuser to work. The divorce papers were already signed.”

Brooke’s memoir details the different types of domestic violence that she experienced. She also tells the very raw stories of the things that she endured during her marriage, as well as how she planned her escape for six weeks prior to safely getting out.

In the book, Brooke also shares her experience with post-separation abuse.

“As much as I love to encourage people to leave their abusers, the reality is that the abuse doesn’t stop once you leave,” Brooke said. “In fact, it can get much worse, and I try my best to explain what that looks like so that victims can be as prepared as possible. At the end of the day, though, there’s a level of peace that is accompanied with leaving abuse, and that is priceless.”

For the domestic violence survivor, writing Firecracker was therapeutic.

“The writing process was very slow because I had to step back and take a lot of breaks from it. Having to relive those experiences was emotionally draining and would leave me in a fog for a few days,” Brooke said. “I’m proud of myself for pushing through it and finishing the book. It was very helpful in understanding my experience.”

Although writing the memoir allowed Brooke to face her own abuse and trauma, she also wrote this book with her younger self in mind.

“I think that there is a lot of work to be done when it comes to educating our youth about domestic violence,” Brooke explained. “I talk a lot in my book about how, as a society, we have done a great job at making physical violence very black and white. Everyone knows that physical violence is not okay. However, we have a long way to go in understanding the many different types of abuse and what that looks like.”

“While I love a good LifeTime movie, I’ve found that most movies and shows don’t give an accurate portrayal of what domestic violence is like,” Brooke continued. “It’s not always so extreme, and it’s not always abusive 24/7. There can be a lot of ‘good’ times in between abuse, and that’s what makes escaping it so difficult. I’ve also found that we have a lot of work to do in understanding domestic violence victims and trauma bonds. We’ve all been guilty of thinking, ‘Why didn’t she just leave?’ But when you look at these situations closely, it’s easy to see why leaving is never that simple. Throw in finances and children, and it’s nearly impossible.”

Although the post-separation abuse is still ongoing for Brooke, she is striving to not let it disrupt her newfound peace. A native of Taylorsville, Ky., and a former resident of Hardyville in Hart County, Brooke now resides in Tennessee. She is staying busy as a blogger, an author, and a mom of three kiddos. When she isn’t with her children, she spends her time reading, painting, or binging a true-crime show.

“It’s been a very long road, but I now have a beautiful home in a great neighborhood, my kids are in an amazing school, and things are starting to settle down for us,” Brooke said. “I stayed single and was in therapy for about a year (sometimes twice a week,) and that was the best thing that I did for myself.”

Firecracker is available on Amazon, Kindle, and Audible. The book is doing very well, receiving many positive reviews. It has been the number one new release for several weeks and a bestseller on Amazon.

A book tour is currently being planned and details will be released soon. Brooke is also in the very early stages of writing a second book.

If you or someone you know is experiencing domestic violence, call 911 immediately or contact local law enforcement. The National Domestic Violence Hotline can be reached at 1-800-799-7233. 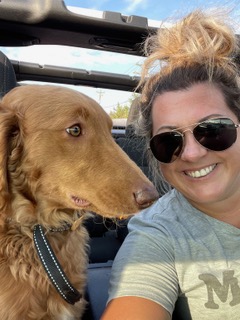 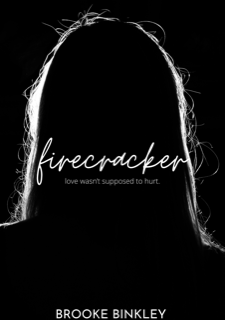 Brooke Binkley’s memoir, Firecracker, is dedicated to her mom. The book can be purchased on Amazon. Photo submitted.