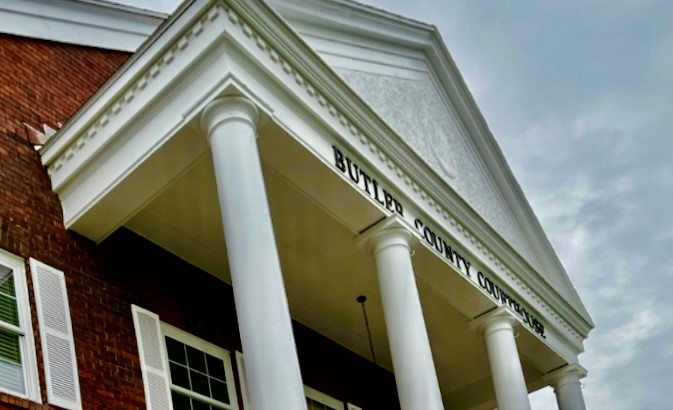 Butler County Courthouse was beautifully renovated this past summer as it was built. Photo by Lynzie Embry

The stories are waiting to be told

Caring about our architectural heritage is a way to show we are proud of our past and want to share these stories with the future.

The thought and care we place in our old buildings is indicative of the legacy we intend to leave future generations.

Whether it was the first bank, an old movie house, department store, or livery stable, each of our communities can tell their stories much easier with historical landmarks, and there are no better reference points than beautifully maintained buildings.

When we preserve our architectural heritage, we are doing more than saving the building. We are saving the stories of the people who used those buildings, and we honor the memory of what they represent.

Glasgow had lost almost all of its Art Deco designed buildings and was quickly becoming the town of the plywood windows and shingled awnings. This is why I chose to keep the brick color and style intact at the Yancey building I bought in 2018.

For decades, people drove by this building and never even noticed the concrete nameplate at the very top. It says, “Yancey Bldg. 1929”. As a means to help downtown Glasgow, I renovated the building and hoped it might encourage others to do the same. I have done this in a few communities in which we publish newspapers. Sometimes it works, and other times it doesn’t.

The menu at Yancey’s Gastropub and Brewery tells a story of the colorful 1929 T. Grayson Yancey. But it wasn’t until just recently we stumbled into a historical relevance tying Yancey and the City of Glasgow together since the very beginning.

Glasgow City Clerk Mona Simmons sent me an email saying, “Hey, Jeff, did you know this?” Inside the email, there was a copy of the original signed minutes dating back to May 6, 1878. This very first document and hundreds from early years are now online at www.cityofglasgow.org and represent hours of work and dedication from Mona and other city employees.

This particular document is a copy of the original meeting in which Glasgow became a city. Presiding over the first meeting was Mayor C.L. Hill and signing as city council members were J.R. Redding, Henry Raubold, W.H. Pace, R.W. Carden, John H. Yancy (Yancey), and James Murrell.

The minutes also detail the first meeting took place inside the offices of Yancy (Yancey), Hill, and Baker. It seems Yancey was partners in a Grocery Merchant business located somewhere on South Green Street. 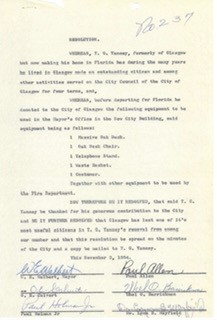 We also found a document showing that on November 2, 1954, a T. G. Yancey (son of John H. Yancey) had an ordinance passed honoring him retiring to Florida, having served four consecutive terms as a city councilman and donating several items to the city.

We now know that T. Grayson Yancey came back to Glasgow upon receiving an inheritance from his father’s estate and followed in his footsteps.

I had an assumption, and it was confirmed the reason these names stood out in the mind of our City Clerk when she was posting the documents was because of the Yancey building renovated on the square and our business taking the name.

When I purchased this building, it had almost been completely demolished inside and out. Water was making its way inside the building, and it had been vacant for more than a decade.

Glasgow was very close to losing not only a very important architecturally significant building but also a wealth of historical relevance to our city.

This is the motivation driving me to have conversations with building owners, encouraging them to help bring every building on the square back to life and help share their stories with the future.

This is why I have been encouraging Judge/Executive Micheal Hale and our magistrates, Tim Coomer, Carl Dickerson, Jeff Botts, Billy Houchens, Kenneth Sartin, and Mark Bowman to not cover or alter the architectural integrity of our county courthouse. We should honor the families of the men and women who served our community associated with it.

It’s not too late to honor our history and save it for our future. Repair the rot, fix the areas needing to be fixed, and paint everything like it was when it was built. Just notice how nice the front columns are now with their repairs and paint. The entire building and our entire downtown square will pop with beauty if it is done right.

The Administrator of the Court (AOC) has openly said they will pay for it and all Barren County has to do is have the Judge/Executive ask for it.

Over the years other counties have done a wonderful job keeping their county buildings maintained and just this past summer Butler County had their courthouse scraped, the rotten areas replaced, and all the trim painted as it was when it was built. It too is a beautiful building located in the center of the square where our newspaper office sits just across the street in an old post office building I bought and renovated back in 2000.

I can’t think of a building in our county deserving to be honored more because of its architectural and historical significance than our Barren County Courthouse. Just imagine the stories just waiting to be told. 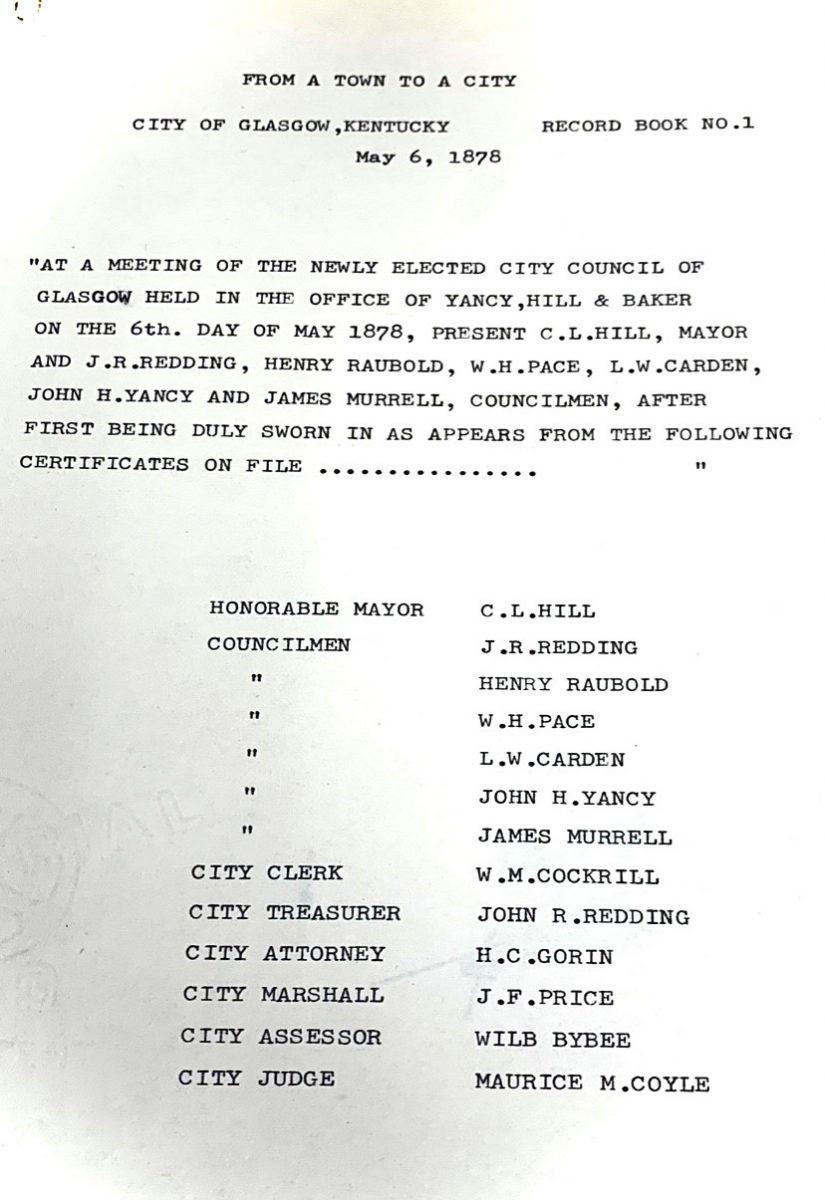 The very first official city document dated May 6, 1878, and referencing John H. Yancey as one of the original city council members. Courtesy of the City of Glasgow Archives

An advertisement published referencing the business in which John H. Yancey was a partner. This building was likely torn down but we are not certain.