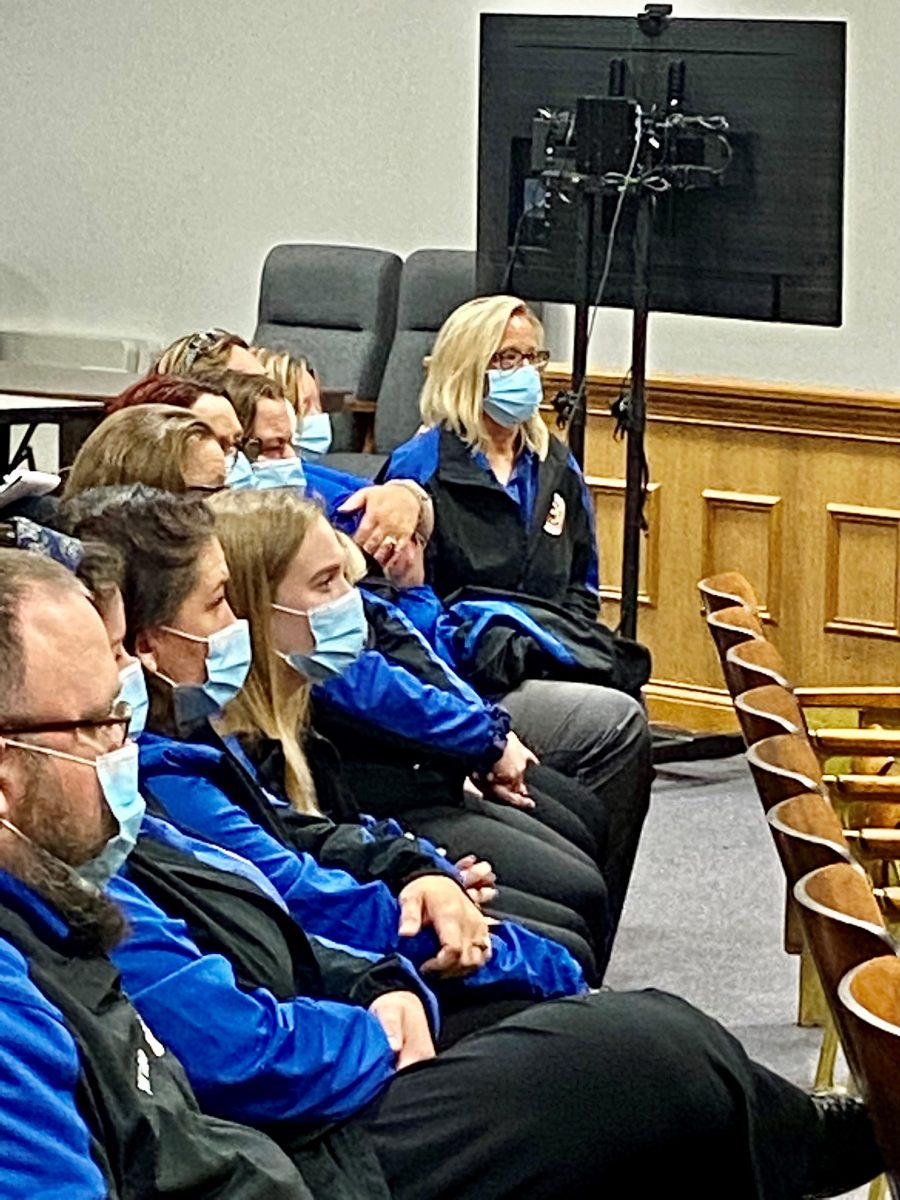 Beverly Harbison, Director of the 911 Call Center, right, and employees were present at Monday night’s Glasgow City Council meeting where a discussion of pay increases for their department was held. Photo by Jeff Jobe

The 911 Call Center Director alongside ten employees were present Monday night for the Glasgow City Council meeting where council members voted to return the $70,000 received for the Barren-Metcalfe Emergency Communications Center, also referred to as the 911 call center.

Both Barren County and the City of Cave City had given $50,000 and $20,000, respectively, to the City of Glasgow for the purpose of a $2/hour pay increase for the 911 call center employees. The understanding is that in 2011, those employees had a decrease in starting pay.

However, to sustain the raise annually, an interlocal agreement was presented to the other entities. That agreement hasn’t been signed by anyone.

The Barren Fiscal Court tabled the item last week to research if the money could come from the American Rescue Plan Act funds.

Even if the interlocal agreement was signed by all entities, any of those could withdrawal from it at any time, which leaves no guarantee for annual sustainability.

In the city council meeting on Oct. 11, council members tabled acceptance of the money citing the issue should first go through the Finance Committee.

Despite that, on Monday night, Honeycutt took an opposite stance when reporting to the council following the prior Finance Committee meeting.

Honeycutt said, “It’s just absolutely not fair to give [a pay raise] to one department and not to them all.” Honeycutt said there were other city departments in 2011 with a decrease in starting pay.

While Honeycutt admitted there are strong opinions revolving around the issue, he said the “icing on the cake” was that the money would need to be returned to the County and Cave City.

Honeycutt further suggested looking at a more equitable funding method for the 911 call center and spread that money to all city departments to help fund raises. He made the motion to send the money back with “much gratitude for the offer.”

Councilman Patrick Gaunce raised the point that the County and Cave City donated the $70,000 and they, too, may have felt like the 911 call center had their pay “slighted.”

Gaunce also said, “Our people are our greatest assets, if we got any extra money, we should be paying them.”

Councilman Terry Bunnell said the money should be returned, but also with a letter explaining that the shares from Cave City would look more like $89,000 and Barren’s $238,000 instead of the $70,000 given between the two.

“We need to return it and have a discussion about how we can pay for this equally among all the municipalities,” Bunnell stated, “It’s fair to the employees not only to the 911 center, but all city employees.” He said it would also be fair to the taxpayers in Glasgow.

Director of 911 Call Center Beverly Harbison explained to the council the history since the inception of the call center in 1994. At that time, there were three dispatchers and those were funded one each from the Glasgow Police Dept., Glasgow Fire Dept., and Emergency Medical Services (EMS). She also explained where the 911 call center funding comes from and how they’re used.

Harbison, however, said that Bunnell’s comment regarding the fair share costs and charging by call volume isn’t a fair price either due to the job duties of the employees.

“Our job goes way beyond these calls of service,” she continued, “We do all the paperwork for the Glasgow Police Department, Cave City Police, and Sheriff’s Department.”

Referring to Honeycutt’s comment that other city departments had a pay cut, Harbison asked for clarification saying she wasn’t aware of any other departments who had a decrease in their starting pay. She said 911 employees used to be hired at the same starting pay rate as firefighters and police officers.

“Someone didn’t like the idea that we made that money so they lowered it on our end, which what would have been the awesome thing to have done is raise the police and fire and left us alone,” Harbison said, “Then we wouldn’t be in the position that we are in today.”

Gaunce said, in his opinion, to make a better decision on the matter, the council should have better information so that the issue is more black and white.

“I’ve heard a lot of opinions it should have been, it was, it is, and I’m not saying anybody’s not being truthful, but I’m just saying to make a decision, we ought to be able to lay a sheet of paper down [outlining the history],” Gaunce said.

Glasgow Mayor Harold Armstrong commended the employees of the 911 call center expressing the stress that they endure on the life-and-death phone calls. He said after an employee finishes training and starts receiving calls, they may leave and go to places like Wal-Mart if the pay isn’t reasonable enough, which would be much less stressful.

Mayor Armstrong said five years ago, Glasgow had enough money coming in to give everybody raises, but that didn’t happen. “Now we have no money coming in, it’s caught up with us and we need to give raises.”

Bunnell reiterated the money has to go back with no interlocal agreement and the $70,000 is not accounted for in their treasury or approved in the budget.

“The entities, municipalities that receive benefit from the 911 need to pay their fair share of all costs related to personnel,” Bunnell said, “That way, we as a city, aren’t paying 74% of it when we’re having 52% of the calls.”

Honeycutt added the process wouldn’t be a “quick fix” and may be incremental initially, but “we need to work towards that goal.”

Not only would the attempt to fund 911 call center personnel involve the City of Cave City and Barren County, but would also include Park City.