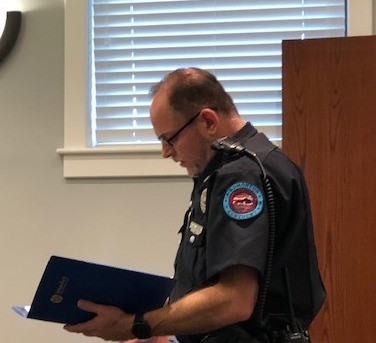 The second reading of Tax Ordinance 2021-2022-02 was unanimously approved. The motor vehicle and watercraft tax is 15.2 cents per every $100 of assessed value in the City of Edmonton as of January 1, 2022. This rate has remained unchanged since 1983.

The second reading of Tax Ordinance 2021-2022-03 was also approved. The Real Property and Personal Property tax rate is .084 per $100 of assessed value in the City of Edmonton.

Public Works Superintendent Moe Hensley provided an update on the water project stating that the water tank in Edmonton is finished but isn’t up and running yet. The newly built Summer Shade tank is up and running and the old tank will be torn down, and the Gascon tank is ready to be put back online.

There was only one bid received for the blacktop work. Scotty’s Contracting & Stone LLC bid a total of $94,220 for blacktopping only. The bid for patching was $3943. The council agreed that Mayor Doug Smith and Hensley would prioritize the roads needing work and choose which would utilize available municipal road funds best.

The council held the second reading of Police Department Shift Deferential Ordinance 2021-2022-04 which authorizes an increase in shift differential rates as an incentive to recruit and keep police officers. The council approved the $0.50 per hour night shift premium increase for employees working 6 p.m. to 6 a.m. for the regular 40-hour shift and $0.75 for any overtime hours worked.

Parks and Recreation Director Brian Garrett advised that seven new speed bumps had been installed in the Edmonton Memorial Park and to use caution when entering the park. He noted that the speed bump had helped with speeding issues within the park grounds.

Edmonton Fire Chief Jerry Clemmons advised that the department had 10 runs in September with 3 being medical, 1 fire, 5 lift assists, and 1 alarm.

Clemmons asked the council for repairs to be made to the fire department building’s middle truck door frame which is causing issues with the door. The council agreed that contractors which renovated the building earlier in the year are to be contacted.

Trick or Treat hours were set for the city of Edmonton for Saturday, October 30th from 4 – 7 p.m.

The City will host a Drive-thru Trick or Treat at the Edmonton City Park on Saturday, October 30th between the hours of 3 – 5 p.m. with the gate closing at 6 p.m. Any business that wants to participate should contact Dawn Devore at City Hall no later than October 15.