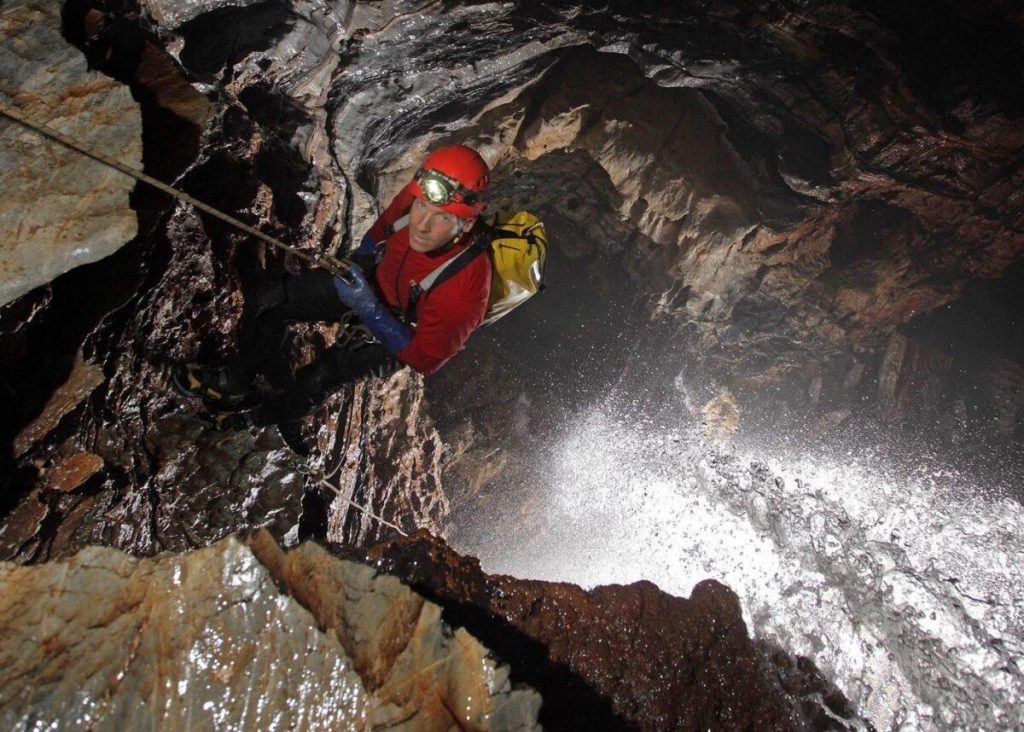 Derek Bristol rappels off a steep ledge while exploring inside Mammoth Cave. Photo by Kassis Beirnacka

Courtesy of the Epoch News

The Mammoth Cave National Park and the Cave Research Foundation announced the underground discoveries as cavers continue to explore the vastness of the cavern system while verifying past research.

The exploration and surveying of Mammoth Cave have been going on for more than 100 years. Maps of the cavern continue to be redefined and enlarged, thanks to the efforts of many volunteers who are committed to professional cave exploration.

“Caves are one of the last frontiers on Earth that are still being explored. They are hidden from view from satellites and cannot be mapped or scanned from the surface or with the assistance of robots, at least not yet,” Derek Bristol, a cave enthusiast, told The Epoch Times. “We must have the human touch to continue the explorations.”

Bristol travels to Kentucky several times a year to participate in expeditions as a volunteer with the foundation. 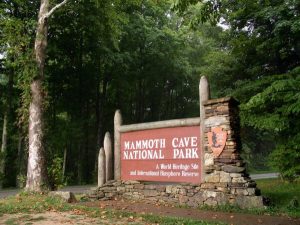 “The recent discovery in Mammoth Cave is a fairly methodical addition of the new miles which occurs with some consistency during the expeditions. The newly added length is generally distributed widely across the cave system and is the result of resurveying and new surveying, making small changes in incremental steps,” Bristol said.

On the other hand, some of the expeditions involve exploring, mapping, and surveying new areas and passageways and rooms that were previously unknown. Some may be small crawlways that go a short distance and end, while others may be extensive, large passages and rooms that are being documented for the first time.

“As the exploration of Mammoth Cave gets progressively more mature, it becomes more and more difficult to make major discoveries,” said Bristol.

“In some cases, the expedition teams are focused on collecting and providing more details, including hand sketches as an artistic representation of the features in the cave.”

Bristol is an expert on cave exploration, caving techniques, and caving equipment, having recently completed a 19-hour trip through the world’s longest crawlway trying to reach a connecting point between two caverns at Mammoth Cave.

Every mile of cave length means a caver has to crawl, climb, squeeze, and rappel through passageways, maneuvering dry and wet surfaces to conquer the unknown with a beam from their flashlights and night-vision goggles. It may require several days of travel time to reach the research site, presenting many challenges along the way.

“Cave exploration is carefully planned and implemented, as it can be a very dangerous activity,” Joe Duvall, a retired tour guide with more than 53 years of experience, told The Epoch Times.

The foundation doesn’t provide formal training in horizontal or vertical caving techniques. However, anyone can volunteer and many skill sets are needed. Volunteers are encouraged to obtain basic caving skills, which can be gained through local clubs known as “grottos.” Grottos are local chapters of the 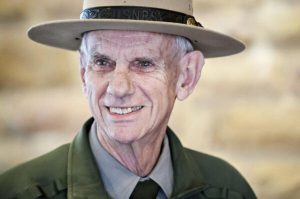 Continued discovery efforts are restricted by available volunteers and resources; as well as limitations placed on exploration by the National Park Service.

It’s believed that Mammoth Cave has many more miles of cave passages to be discovered, although new natural entrances aren’t expected. The primary mode of discovery is expected to be through the pursuit of side passages. 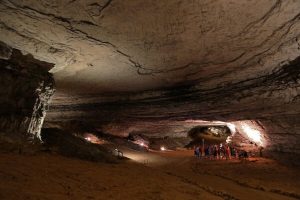 “It is challenging to explore and develop new areas and it is very expensive to open new areas to the public,” Duvall said.

Duvall has worked as a tour guide in Mammoth Cave from 1961 to 2014, retiring at the age of 78. In addition to being a guide, he was a full-time history teacher at Caverna High School, in Barren County, for 30 years.

“I took every class on a field trip to Mammoth Cave. It was important for them to learn the history and significance of this amazing natural resource. We won the War of 1812 because of the saltpeter and calcium nitrate, to make gunpowder, from Mammoth Cave.”

Duvall started working as a capper at the age of 15 for Diamond Caverns making $3 for a 12-hour day. His job was to divert people heading to Mammoth Cave to visit Diamond Caverns instead. “Our uniforms included a streetcar cap and we dressed like a park ranger. It was easy to divert the visitors to Diamond Caverns, earning tips ranging from five cents to a quarter.” Perhaps hearing of his successful diversions and his persuasive nature, Mammoth Cave soon hired him to work for it instead.

He has celebrated every gain as Mammoth Cave expanded from 144.4 miles in 1972.

“Every exploration and discovery is exciting, and the foundation and cave explorers make it possible to provide new information to the tour guides,” Duvall said. 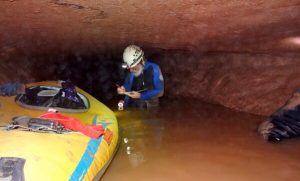 Duvall influenced many cavers during his career. In 1974, 6-year-old Christopher Clark was mesmerized on a guided tour conducted by Duvall.

“I remember the historic entrance being so huge, I thought it had to hold wonders that I could not imagine, and it did. I can remember the coolness of the air, the sounds of the trickling water, and areas of complete silence. It was a mammoth thrill of the unknown,” Clark said.

On the tour, he was able to walk down the oxen cart trail and view the oxen hoof prints left in the mud of the cave. He visited the Rotunda, the Church, and the saltpeter mining areas.

“The most memorable thing I witnessed was in the large cathedral-type room where the guides would throw burning torches onto precarious ledges high in the room. It was an amazing sight and it made an incredible sound as the fire was thrown through the air,” said Clark.

Torches were discontinued in the 1990s, but they certainly made an impression on a young boy. 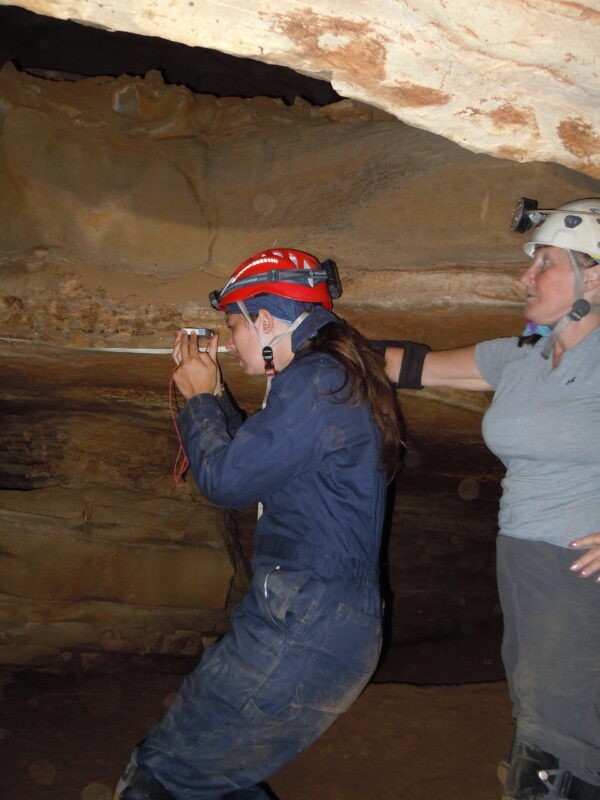 He remembered the Giant’s Coffin, which was a mummified prehistoric man, lying in the position he was found in underneath the rock that took his life.

“These impressions led me to pursue a job at the cave. Where else can you throw fire and hang out with mummies?” Clark said.

Mammoth Cave offers visitors ancient artifacts, cave critters, and mineral formations. There are vertical shafts, from the towering 192-foot-high Mammoth Dome to the 105-foot-deep Bottomless Pit. Some passages and rooms contain white gypsum crystals, while others are filled with stalactites, stalagmites, and other cave formations.

“Caves are home to a large variety of often unique and rare life forms that are important in maintaining a balanced ecosystem,” Bristol said.

“Caves are also critically important to the quality of many groundwater systems that are the source of irrigation and drinking water for millions of people. Exploration and mapping of caves is an important step in being able to understand and protect these fragile resources,” he added. “It is also extremely thrilling and fun for those of us doing this type of work.” 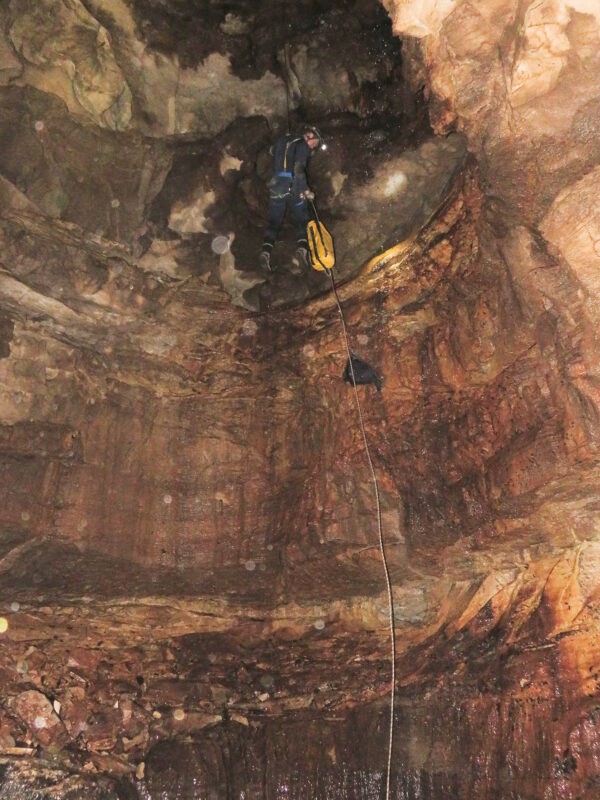