Councilman Joe Trigg asks for clarification regarding the 2021 tax rate prior to voting on the second reading. Photo via EPB Channel

The Glasgow City Council voted to approve the second reading adopting the tax rate for 2021 in an 8-1 vote, including one councilman abstaining from the vote.

Before the vote, Councilman Joe Trigg asked if this tax rate would be expected to generate around $200,000 and Glasgow Mayor Harold Armstrong replied, “$7,500… Seven thousand, five hundred.”

Trigg also said, “Someone said we were told we have to do this by BRADD.” BRADD is the Barren River Area Development District.

“It is a formula that BRADD provides to us to tell us what rate we should set it for,” Councilman Wendell Honeycutt explained, “We are not required by law to do that; it is strongly, strongly suggested we do it.”

Honeycutt further explained that if the council fails to set the rate as high as what the formula recommends, then it makes it more difficult for the council to ask for help if the city should need help due to “not maintaining our taxes properly.”

Trigg said historically, “Did we not lower our tax rate once before?”

Mayor Armstrong said the City of Glasgow has lowered the tax rate twice since 2010 because, at those times, the assessments were $13-million more over a three-year time period, which allowed the City to lower it and still get the same amount of money.

Trigg pointed out that previously the tax rate has been lowered twice and now, “we’re raising it back to where it was.”

City Clerk Mona Simmons asked Gaunce, “Do you understand that if you abstain, your vote still goes towards the majority?” Gaunce implied he understood without explaining his reason for abstaining.

Monies collected from this tax will be paid into the general fund of the City to be used for payment of proper expenditures as determined by the Council. The first reading of the tax rate ordinance was held on September 13, 2021.

The second reading of a re-zoning ordinance was passed unanimously by council members for the Housing Authority of Glasgow at the intersection of Lincoln Road and Myrtle Street. Approximately 1.096 acres will be change classification from a B-2 General Business District to R-4 Medium Density Multi-Family Residential District.

Trigg asked if the Housing Authority of Glasgow will be adding a new unit and Mayor Armstrong replied there would be an additional unit added, which was the reason for a need to re-zone the location.

Mayor Armstrong announced information had been provided to the Council in their packet for the Glasgow Electric Plant Board minutes for July 27, August 11, and August 24, 2021, for their review to be brought up to date, if need be, on those board meetings.

A discussion was held regarding the upcoming Salvation Army Bell Ringing for members to participate in. The consensus was to participate on Sunday, October 31, from 4:00 p.m. to 7:00 p.m. This is subject to change.

Mayor Armstrong urged individuals participating in events for the upcoming Halloween weekend, to please wear a mask and for parents to clean/sanitize the kids and the candy received from trick-or-treating after going door-to-door.

The next meeting will be held on October 11 at 7:00 p.m. in the Glasgow City Hall Chambers. 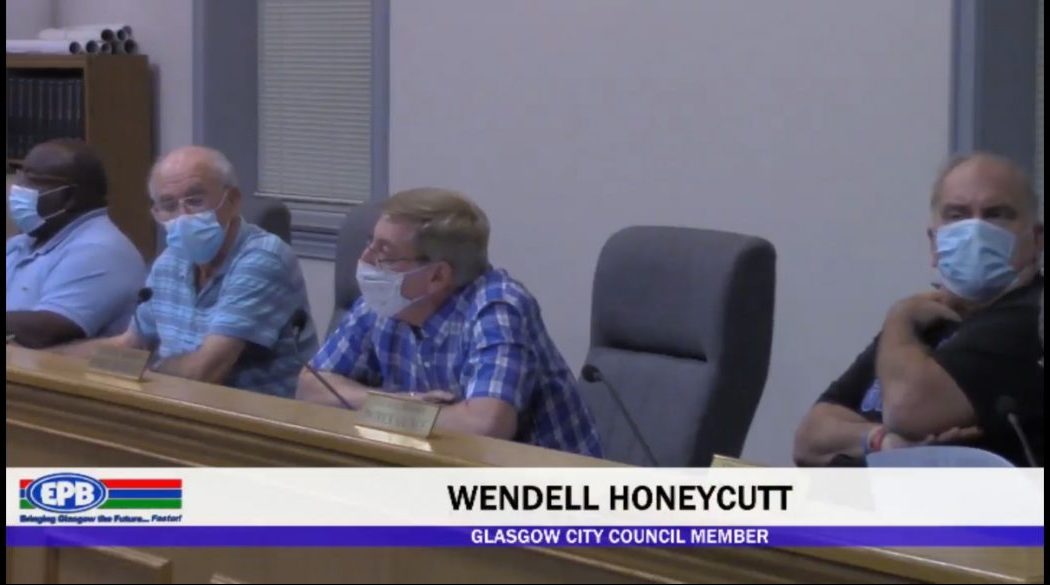 Councilman Wendell Honeycutt, center, explains why the City of Glasgow opts to choose the suggested tax rate as recommended by the Barren River Area Development District. Photo via EPB Channel