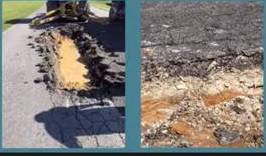 An area on Grimes Way that is currently being addressed

Three findings were listed on the audit from the office of Mike Harmon, Auditor of Public Accounts, for the Barren County Fiscal Court.

At their regular meeting on Sept. 21, current County Treasurer Jenny Hoffman was available for questions surrounding the audit results.

A magistrate asked Hoffman for explanations regarding the findings, specifically the cash transfers portion. Hoffman answered, “This was not my audit, this was before my time, so I can’t answer that first question…I don’t know.”

According to the financial statement findings of the state audit, “Six of the transfers made by the county treasurer did not agree to the cash transfers approved by the fiscal court and documented in the minutes. These six transfers totaled $784,416.”

“This was caused by an oversight of management. They did not realize that cash transfers, including those for debt service payments, required fiscal court approval. By not having cash transfers approved, the fiscal court may not be aware of accurate fund balances which could create cash flow issues,” the audit reads. Hoffman read from this information from the audit to the Court.

Hoffman added, “So, I’m assuming on the debt service payments, the transfers didn’t get court approval.” Hoffman restated that she doesn’t have answers for this as it was before her appointment.

A second item finding in the audit states, “The Barren County Fiscal Court does not have adequate controls over disbursements.” Three items noted include: one payment not recorded properly, five invoices not paid within 30 days, and eleven purchase orders were not issued.

Hoffman told the Court that this section was referring mostly to purchase orders regarding utilities and payroll. She said her understanding is purchase orders have never been completed for such items in Barren County.

She said it is a very time-consuming step and some treasurers are still choosing not to do purchase orders for utilities and payroll despite it being found in future audits. However, she added that Barren County has started doing this to prevent future audit findings.

Hoffman told the Court that she wasn’t personally aware of this procedure until this audit report. Hoffman has been working to update the schedule to current and said, “Again, this was before me so I don’t really know about this one and why it wasn’t updated.”

One magistrate pointed out that in the future, if something like this comes up again, to notify the Court as soon as possible and if need be, a special called meeting could be called to address any issues.

Hoffman stated she was informed she would receive a “box of audits” and hadn’t received this particular audit at that time, but that once she was made aware of any issues, she would forward that information on to the Court.

Barren County Finance Officer Sherry Jones updated the court regarding a Community Development Block Grant for $200,000 that would help with utility assistance for individuals in the community. Jones said, “We are working with a nonprofit local agency to get the details worked out and waiting on an agreement from Frankfort to finalize the deal.” Jones said the court would, at some point, have to enter into a legally binding agreement with the local nonprofit to ensure the grant monies are properly administered.

The Court unanimously approved to amend the County Clerk’s Office budget to add an approximate $200,000. The Clerk’s office initial budgeted amount was $1.23-million and the additional monies would increase the budget to $1,436,793. County Clerk Helena Birdwell announced that the current delinquent property tax amount had decreased to $176,723.49. Judge Hale added that the current delinquent property tax has been the most collected since 2015.

A unanimous vote to approve a 2016 Ford Police vehicle for the Barren County Sheriff’s office was approved in the amount of $17,850.

Judge/Executive Hale gave an update regarding current roadwork in the county. Photos of current projects were available for view for Grimes Way, Noah Steenbergen, and South Combs. Hale reported that the county has been able to pave 7.2 miles for a cost of $130,000 compared to a historical cost paying Scotties $452,000 for the same mileage amount. He said road work would continue as long as weather permitted.

Judge Hale and several magistrates commended the Transportation Department with the work they have accomplished. “Scott, Jamie, and Susan have really got out there and put on the ground what needs to be put on the ground,” Hale said.

The first reading of an ordinance pertaining to animal rabies passed unanimously. Amendments approved are listed in Section 90.02.

The Court unanimously approved to discontinue county maintenance for Stallion Way. A public hearing was held with no comments brought forth. Magistrate Tim Coomer stated notices had been posted and no negative comments had been received. Stallion Way is approximately 0.210 miles in length and is located off KY 1519 Veterans Outer Loop. 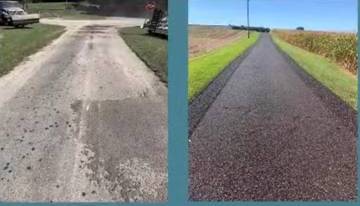 Before and after road work for South Combs