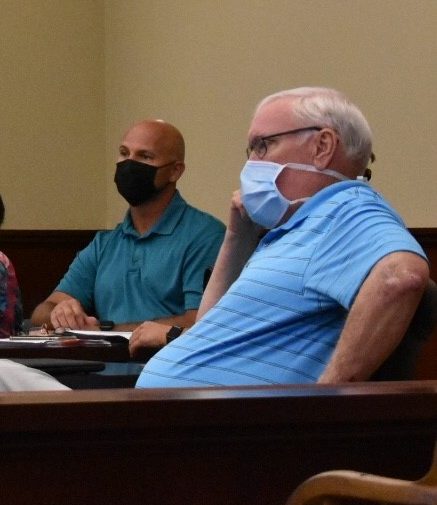 Against combining park project at this time

On September 14, a special called joint meeting of the Barren County Fiscal Court and the Barren County Project Development Board was held to resolve confusion regarding the construction of a new Judicial Center.

Up for discussion was the approval of the Addendum to Memorandum of Understanding with the Administrative Office of the Courts (AOC), Barren County, and Barren County Public Properties Corporation for Capital Construction Project to Construct the Barren County Judicial Center.

Judge/Executive Michael Hale called the meeting to order and announced no questions would be taken from the community.  Some in attendance felt the community might be able to ask questions.  He then turned the floor over to Laurie Dudgeon, AOC Director, as the first to speak.

“This is a $32 million project appropriated that doesn’t cost Barren County anything,” said Dudgeon.

During the last fiscal court meeting, some of the magistrates expressed concerns. They wanted to be assured that they would continue to have a say in the building project, that the building would remain downtown, and that there would be no blowback on taxpayers.

Another question posed at the meeting held last month was whether or not a site had been picked as part of a joint project between the county and city.

“There’s not even a site picked,” Dudgeon said. “There are hypothetical designs for hypothetical sites. I think there’s a lot of miscommunication. It’s not accurate. There are no deals.”  She also addressed the importance of keeping the building near downtown.  “We (AOC) like to put these judicial centers close to downtown. When they are not, we lose lunch spots and downtown business.”

Magistrate Dickerson contends the magistrates were not part of the process involving the Barren County Project Development Board and at no time did Hale or anyone discuss with them how it might involve a city park.

“If we show up to one of these meetings, will we be invited in?” asked Dickerson.

“If you expressed an interest,” replied Judge John Alexander.  He said he sees no reason why magistrates couldn’t come to meetings and even go into closed session.

Alexander also replied to questions of whether or not a park would be built along with the Judicial Center.

“I saw it as sort of a symbiosis between the projects,” he replied, but further stated the two projects were separate and may or may not work together in the future. He also reaffirmed all that has been discussed so far are proposed sites.

It’s not sure why the site involving a proposed downtown park is the only one released in public, nor why any proposed site would be released prior to purchase negotiations.  This is one area specifically legal to discuss in a closed session because it could very well affect costs associated with the project.

“There is no one on the court that doesn’t want a new justice center,” Magistrate Tim Coomer said.

Coomer said if he had felt voting for the Memorandum of Understanding meant he was voting for a park he wouldn’t have voted yes back then.  This is not at all what was discussed.

“The people I represent, the people of Temple Hill and 88, don’t want a park, they don’t even want a Judicial Center to be built,” said Dickerson.  But he said he is voting in support of the entire county on this specific issue and not just his district.

Magistrate Coomer chimed in to say, “I’m not against a park, but I am concerned for safety.  Do you want your kids playing beside where they deal with murderers and rapists?”

Coomer further expressed concern on whether or not they would be involved with the decision of who might perform if an amphitheater was built, decisions made would reflect on the Fiscal Court.  He believes future decisions would need to be considered cautiously to allow them to remain in control.

Dudgeon assured the Magistrates the property would be owned by the county, and the county would hold the deed to the building and land.  All decisions made would be made by them.  If after the Justice Center is completed and they wish to enter into an agreement with the city they can, but if they don’t want to then this is up to them.

Magistrate Jeff Botts also spoke out saying the reason he voted no at the August meeting was not because he did not want the Judicial Center.  It was because this is a $32 million project and because of the poor zoom connection, he had a difficult time hearing and understanding the details being presented.  His no vote was given so he and others could get their questions answered.

Botts made it very clear any reports he or any magistrate voted against the Justice Center were not the truth and false reporting hurts our community.  He said he takes pride in how the fiscal court has been able to cooperate and get along and believes this meeting will help them regain it.

It was voted unanimously that the project move forward and at the closure of the special called fiscal court meeting, a meeting of the Barren County Public Properties Corporation was called to order.  The same voting members make up this group, so once again they voted to approve the Addendum.

As reported in last week’s Barren County Progress this vote is to proceed with the process to begin securing the bonding needed to finance the project.  No specific land purchase has been approved and no consensus has been made other than the Magistrates do not want a park project included with the Judicial Center for which they approved to bond.

Read about future developments on the construction of the new Judicial Center in the Barren County Progress. 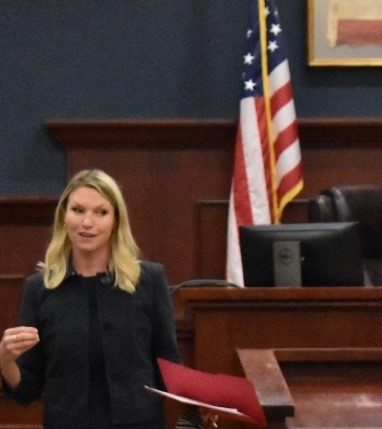 Laurie Dudgeon of AOC was present to help the court gain clarity. Photo by Jennifer Moonsong