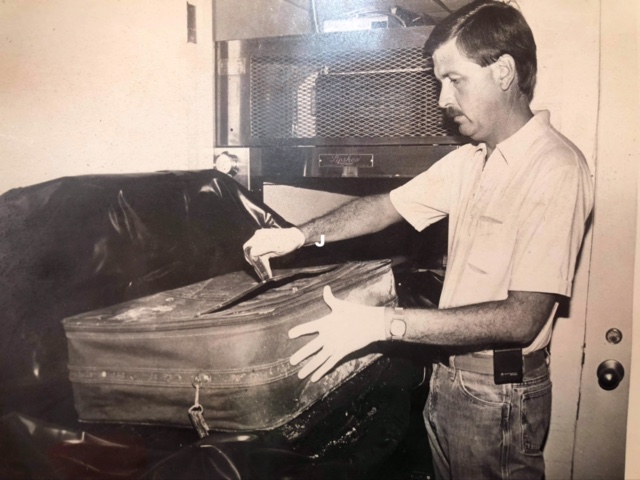 Thirty-two years ago, a blue suitcase was discovered by two fishermen at Skaggs Creek. Inside of that suitcase was skeletal remains.

Those remains were examined by the Barren County Coroner at that time, Larry Marion.

“On August 20, 1989, I received a call from law enforcement that a body had been discovered in Skaggs Creek, just off 31-E south,” Marion said. “Upon arrival, I discovered a couple of fishermen who had found a suitcase, hanging in a tree, while fishing. The water had been really high recently, and when it had lowered, the suitcase had lodged in the limbs of a tree. The fishermen found the suitcase and, not knowing the contents, had opened it and then alerted officials…I immediately knew the remains was a child because of its size and anatomy, and because of the deterioration, I realized it had been in the suitcase for sometime.”

Marion, who served as coroner of Barren County from 1986-1990, had the suitcase and its contents sent to Louisville for an autopsy. He had kept in touch with the medical examiner’s office and received an autopsy report. Information from that report was included in last week’s “Part 1: The Blue Suitcase” of this cold case series.

“A model of the child was also made of what he/she supposedly looked like and was published in the National Registry of Missing Children,” Marion explained. “At that time, there were no reports of missing children in this area. As always, there are missing children all over the country, and I felt this child was put in this area from a person traveling through who thought with the high water that it would be a good place to deposit the suitcase. It is possible, because of the current of the lake, the suitcase could have been put in the lake elsewhere.”

Marion stated that at that time DNA was not as technologically advanced as it is today.

“I would think a possibility would be to exhume the remains and pursue testing,” Marion said. “The remains, if I can remember, were buried on the property owned by the county off Hwy. 249, which also has the body of another Jane Doe adult that was discovered in the lake that was from a past coroner.”

It should be noted that an online news article from 2015 stated that the skeletal remains were stowed away in a “white plastic box” at the state medical examiner’s office. The Barren County Progress contacted the Office of the State Medical Examiner in Louisville. As of press time, the Progress was unable to speak directly with the medical examiner to confirm where those remains are at this time.

During his time as coroner, Marion averaged about 200 cases a year while serving Barren County. He stated that out of all the deaths he investigated, this one haunts him the most.

“I think about this case on occasion, knowing someone misses this child, played with, took care of, and raised her,” Marion said. “I’m haunted still by this child, and I can’t help but think of the person responsible for this hideous crime, returning to his/her hometown and resuming his/her daily life as if all was well.”

“I think about and hope that this innocent child was deceased before being placed in the suitcase and tossed,” he added. “It also bothers me knowing that whoever committed this or knows about this death is walking around 32 years later with no remorse…Thirty-two years is a long time to retain information on this case, and it could be possible that only one person knew and that person could also be deceased.”

Helplessness, Marion said, is what he has felt by not being able to provide closure to the child’s family and friends.

“I believe if two or more people know about an incident, the odds of solving it are much better, so maybe this will be the case,” Marion said. “…If anyone knows anything about this case, surely he/she would have come forward by now. I believe the only chance we have now is DNA.”

It should be noted that the fishermen who discovered the suitcase at Skaggs Creek was Chandler Wyatt and his nephew Carol Wyatt. However, both have since passed.