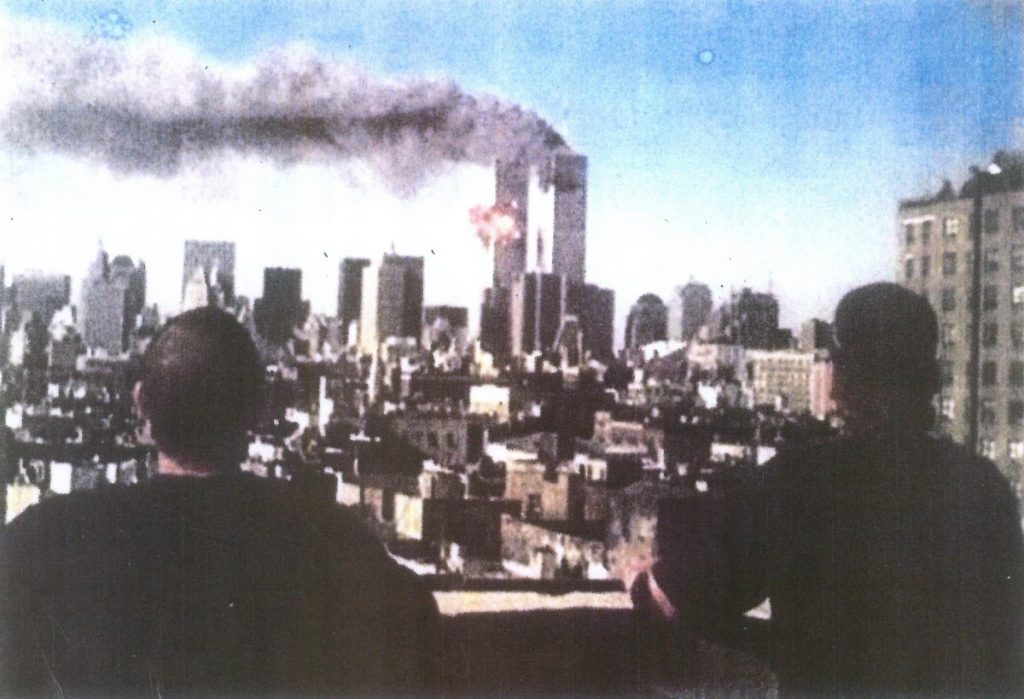 This photo was taken right as the second plane hit the South Tower of the World Trade Centers on September 11, 2001. Mark Lemieux, left, witnessed the devastating attack. Photo by Bill Ratelle.

When Mark Lemieux was just 37-years-old, he found himself as an employee of Unistall International Inc., out of Plainfield, Connecticut. The company installed furniture in college dormitories, military bases, jails, and medical facilities all across the country.

On September 11 of 2001, Mark and his coworkers were in New York City, installing hospital beds at a senior living facility.

“To us, it started off like any other September morning in New York City,” Mark said. “We’re up at 5, we leave by a quarter til 6, we’re in downtown by 6:30 so we can grab a quick breakfast, and we’re at the job site by 7. Usually, there’s a tractor-trailer truck waiting for you at 7.”

As Mark and his crew worked inside of the building, they heard a loud noise and immediately went outside.

“One guy ran down to the company van, got a set of binoculars and a camera, and the rest of us went to the rooftop with the housing people from where we were working to put in these beds,” Mark said.

That’s when Mark and the others saw the North Tower of the World Trade Center buildings billowing with fire and smoke.

As they continued to watch the tragic scene unfold from approximately three and a half miles away, Mark couldn’t believe his eyes. He witnessed a plane strike the second tower, the South Tower.

“The first tower seemed like it was an accident of sorts, but when you see the second plane banking and hitting your towers, I had past military experience, so I knew that it wasn’t the right thing.”

“We saw the second plane banking, and by that time the guy that ran down to the van was up on the roof and was able to snap that picture as soon as it hit the building,” Mark continued. “We did have some facial hair burning, three and a half miles away, you know, your eyebrows and your mustache.”

Although he knew that this was no accident, Mark and his coworkers made a choice: to run towards the towers. They wanted to help in any way they could.

“On our way down in, we passed some Iranians who were dancing around, burning American flags, but yet the news wouldn’t print that in the beginning, but it was true,” Mark recalled. “There were a lot of women and children running up the street to get away because I believe there were schools just a couple of blocks away…People coming out of different buildings because they weren’t sure how many buildings were going to get taken out.”

“…As we were running down in, you had thousands of people running at you to get out, but here you had six or seven guys I think it was running down, running in,” he added. “…We had M16s pulled on us from the U.S. Marshalls and told to get out of the area away from them…”

Mark and his coworkers were able to run closer to the Twin Towers, getting within a block and a half away. At that moment, Mark saw something that would change his life forever.

“There was a lot of black smoke and gray dust as it (one of the buildings) was collapsing,” Mark said. “I was looking through the binoculars. I saw a man and a woman, anywhere between the 90th and the 95th floor I guess it was. The windows were blown out already. They hugged. They kissed. They jumped. As the building was collapsing, the wind shifted and split them apart. It took her and sent her up against a building next door, and if you’ve ever seen a tomato splatter on the ground, that’s what that woman’s face looked like when she hit the wall.”

Mark and his crew then made their way back to their company van and headed out of the city.

“They (the National Guard) stopped us on the bridge. They opened up our van. They took everything out of our van and checked us for bombs,” Mark said. “They had bomb-sniffing dogs there and the whole nine yards because they were checking everybody that was coming in and out of the city now. I say that within an hour after it happened, they had National Guards on every bridge coming in and out of New York.”

The company that Mark worked for was not allowed back into New York City until November.

“(They) didn’t allow us to come back into the city to perform any work because they were still dealing with the clean up and all of that,” Mark explained. “…We went in one day to finish up with hospital beds…I think we went back one more time right before Thanksgiving, and we were able to walk the block and get closer. They had all the fencing up and stuff, but it was a huge hole.”

Mark said it was a very emotional experience to have witnessed the 9/11 attacks and then to go back to see the devastation.

“It made me cry because it brought back everything that happened a couple of months prior to that. It was still fresh,” he said. “Trying to get rid of it in your mind, but then you walk there because now you want to see what the whole outcome is. You know, you see pictures on TV, but being there and experiencing it first hand, I needed for myself to go back down and see.”

It was also a very emotional experience as Mark had worked in the World Trade Centers approximately four years prior to 9/11. He also knew people who were working in the towers on that September morning.

“They were beautiful buildings, lots of marble. Every floor was different depending on which company had which floor,” Mark said. “Every company had their own setup. They were all in very nice shape, kept up very well…The day before (9/11) we were working right behind them, the Twin Towers, at John J. Law School doing dormitory furniture there.”

“I knew a few financial guys (who worked) in the buildings (Twin Towers),” Mark added. “…I believe their names are on the plaque at the (9/11) memorial.”

Mark stated that he would never wish for anyone to witness what he did on that September day in New York City as it left a horrible impact on his life.

“For a long time, those were my nightmares,” Mark said of what he saw on 9/11. “I went down a very dark road after this…I did a lot of crack cocaine to stay awake because I did not want those nightmares no more.”

“…I allowed myself to be homeless for seven years,” he continued. “…I wasn’t paying no bills. I used every penny that I found, made, whatever. I worked and did drugs.”

After much time passed, Mark’s health declined in part due to the drugs. He finally sought help.

“It took me about a year of rehab with some psychological counseling and everything else to help me get through this,” Mark said. “…I still, to this day, go to counseling…Now today, 20 years later, I can talk about it. It still bothers me a little bit, but I don’t have the nightmares no more.”

Mark does continue to deal with other health issues, however, including asthma, COPD, and emphysema. Those, according to his doctors, are directly caused by the inhalation of toxic fumes and dust during 9/11.

A native of Connecticut, Mark has resided in Hart County for the past seven years. He said he has not returned to the 9/11 site since 2001.

“I traveled through it (New York) not too long ago to get back home to the other end of Connecticut and Rhode Island, but I did not stop,” he said. “Too many memories.”

For Mark Lemieux and many others, September 11, 2001, will be a moment in American history that will forever be etched in time, memory, and minds. 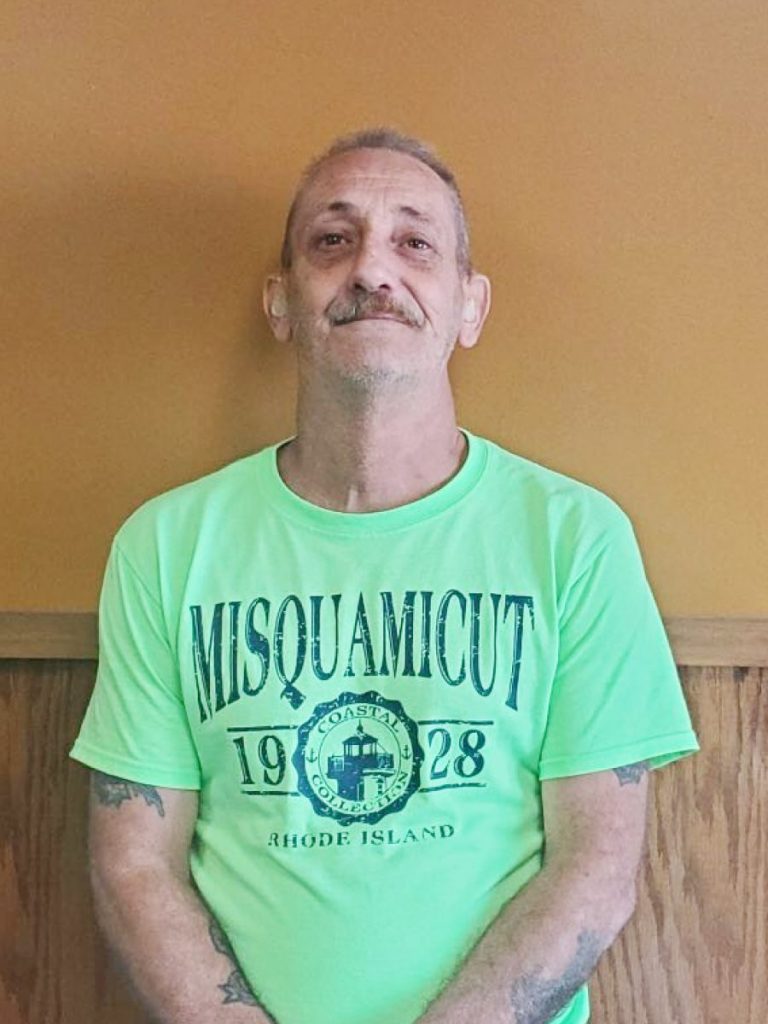