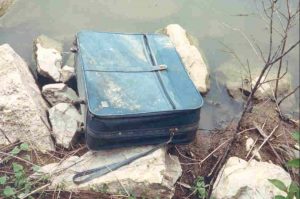 Upon unzipping the suitcase, the fishermen discovered skeletal remains. A call was then made at approximately 4:17 p.m. reporting the discovery. State police arrived on the scene shortly after.

The skeletal remains were transported to T.J. Samson Hospital where they were examined by the Barren County Coroner at that time, Larry Marion. The age, sex, and race of the individual could not be determined.

The next day on August 21 of 1989, an examination of the remains was performed at the Central Medical Examiners Laboratory in Frankfort, Ky., by Dr. Barbara Weakley-Jones, M.D., and Mark Bernstein, D.D.S., Forensic Odontologist. A forensic odontologist is responsible for the handling, examination, and evaluation of dental evidence.

According to the Chief Medical Examiner report, the suitcase that was found was a blue American Tourister, a canvas-like suitcase that had four wheels on the bottom and a set of keys attached to the handle. A blue strap was attached on one side with an open front with a single zipper. The plastic handle of the suitcase did not appear to be worn. However, a metal apparatus on the handle did show evidence of rust.

The skeletal remains inside of the suitcase consisted of a skull with a lower jaw that had several teeth absent. Other remains were present as well. A total body x-ray did not reveal any bullets or projectiles of any kind.

Upon closer examination of the adipocere, the substance formed by the decomposition of soft tissue, several teeth were found. Multiple pieces of similar hair were also discovered, as well as a larger and darker piece of hair.

No clothing or jewelry was found in the suitcase.

The suitcase and remains were shipped to Dr. David Wolf. Upon a final diagnosis completed on January 17 of 1990 at Humana Hospital/University of Louisville, the following was determined about the remains:

The Barren County Progress recently obtained a copy of the Forensic Anthropology Report regarding the reactivation and analysis of Cold Case 89-F-37, the case of the skeletal remains found in the suitcase at Skaggs Creek. The report was dated March 18, 2004 from Emily A. Craig, Ph.D., State Forensic Anthropologist and addressed to Barren County Coroner Michael T. Swift, Jeff Wilson with the Kentucky State Police, and Gerald Nance, Senior Case Manager of the National Coalition for Missing and Exploited Children (NCMEC).

According to that report from 2004, in 1989 forensic anthropologist Dr. David Wolf conducted an analysis and determined that the remains was that of a 2 1/2-year-old child of Caucasian ancestry that died in 1986 or 1987. The sex of the child was listed as unknown.

“Fran Wheatley and myself reexamined the remains on August 3, 1995, as part of re-analysis and inventory efforts,” Craig stated in the 2004 report. “This new analysis in 1995 indicated this individual was very likely a female whose skeletal morphology reflected both Negroid and Caucasian ancestry.”

“Gerald Nance, senior case manager with the National Center for Missing and Exploited Children, independently reexamined this case (89-F-37) on October 31, 2000, and contacted me suggesting a possible match between 89-F-37 and Cherie Barnes,” Craig continued. “Cherie Barnes is a 2 1/2-year-old biracial (Caucasian/Negroid) female who had been reported missing since January 7, 1987. At this time, Mr. Nance was unaware of the “new” biological profile established in 1995.”

Craig’s report goes on to state that the case was then reopened and analyzed. Photos of the suitcase were forwarded to Nance who subsequently showed them to the maternal aunts of the supposed victim, Cherie Barnes. The aunts reportedly identified the suitcase as being part of a set that once belonged to Cherie Barnes’ mother, Elizabeth Turek Vasser.

Furthermore, in the 2004 report, it was stated that selected skeletal elements and teeth were submitted for possible DNA extraction. However, due to the condition of the tissues, no definitive DNA profiles had yet been established. The ilium, a large broad bone forming the upper part of each half of the pelvis, was retained and submitted for future testing in the wake of technological advances.

In addition, a facial superimposition of a photograph of Cherie Barnes and the skull and mandible of the remains in the suitcase was conducted at the National Center for Missing and Exploited Children. Dr. David R. Hunt, Ph.D., a Physical/Forensic Anthropologist for the National Museum of Natural History in Washington, D.C., conducted the analysis.

In a December 22, 2003 report addressed to Gerald Nance of NCMEC, Dr. Hunt stated that the analysis did not exclude the remains as being that of missing toddler Cherie Barnes. Although there was some lack of consistency between the photo of Cherie Barnes and the remains found, the inconsistency could easily be explained as a factor of possible photographic distortion based on the camera position to the child’s face in the photograph in contrast to the plane position of the skull for overlay.

Furthermore, horizontal lines were placed through the eyes to orient the position of the photograph to the skull. Horizontal lines were also used in the location of the mouth, occlusal line of the teeth, and the nasal aperture to correlate the features in the photograph of Cherie Barnes to that of the skull remains. All points of reference that were evaluated were within close proximity and were considered consistent.

In other words, the remains found in the blue suitcase at Skaggs Creek in Barren County are presumptively identified as missing toddler Cherie Barnes. However, without DNA confirmation at that time, it could not be determined without a doubt.

Who is Cherie Barnes?

Elizabeth, who was also known as Sissy, and Cherie’s stepfather, Larry Vasser, had custody of Cherie in 1986. That same year, the couple, along with Cherie, moved from Nashville to St. Louis, Missouri.

Elizabeth worked as a prostitute for Larry on Independence Avenue in St. Louis.

On December 1 of 1986, Elizabeth disappeared from their home. She was discovered in February of 1987 in the Mississippi River as the victim of homicide. There was no trace of Cherie at the scene.

However, Elizabeth remained unidentified for seven years until her family members contacted authorities and reported both Elizabeth and Cherie as missing persons. That’s when the investigation into Cherie’s case began.

Cherie, who was born on July 30, 1984, was reported as last seen on January 7, 1987, in Kansas City, Missouri with her stepfather, Larry. She has never been heard from again.

Larry had told authorities that he knew where his stepdaughter was located, stating that she was “being looked after” by his family members and living under another name in the Kansas City area.

At one time, Larry had offered to give Elizabeth’s mother photographs of Cherie and a recording of the child’s voice in exchange for $500.

In the mid-1990s, Larry was in prison for armed robbery, slated to be incarcerated until at least 2028.

Cherie’s disappearance is classified as a non-family abduction. Her case remains unsolved. 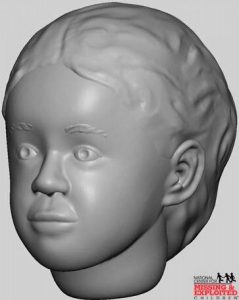 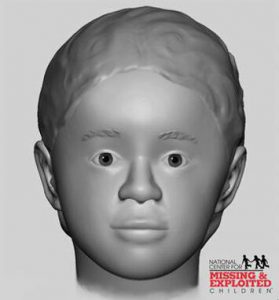 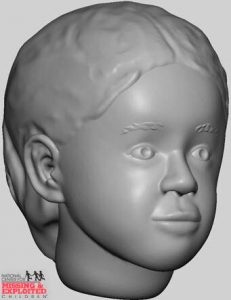 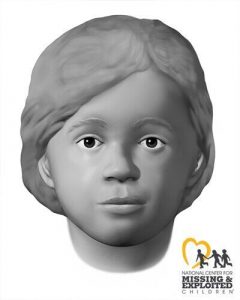 Facial renderings of the remains found in a suitcase in 1989 in Barren County. Photos courtesy of the National Center for Missing and Exploited Children 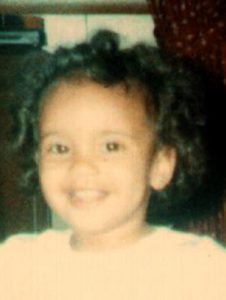 Cherie Barnes, the 2 1/2-year-old daughter of murder victim Elizabeth Vasser, went missing in 1987 in Missouri. To date, she has never been found. Photo courtesy of the National Center for Missing and Exploited Children.