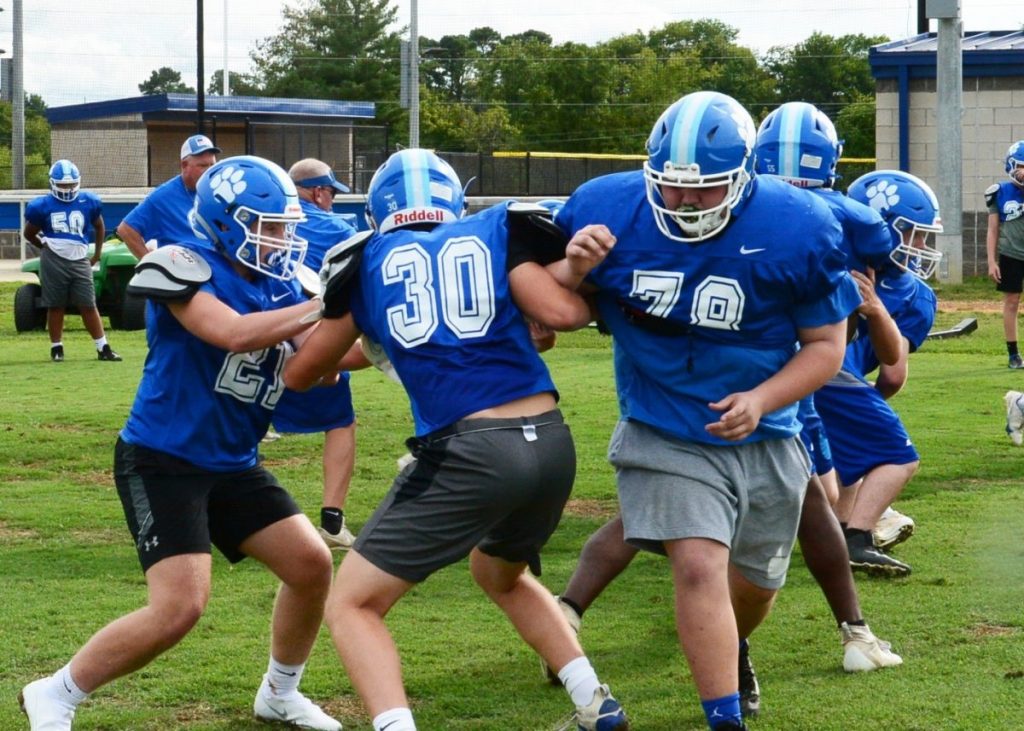 The Scotties worked hard over the summer and during preseason practices in preparation for the 2021 season. Read about the team and an in-depth interview with Coach Jeff Garmon in the fall sports reviews in the Barren County Progress in an upcoming issue. Photo by George Katchak Jobe Photographer

The Glasgow High School Scotties were shutout in their home opener against the Wofford Yellow Jackets. Something that does not happen often with Coach Jeff Garmon and the 3A Glasgow Scotties. They had a problem with penalties in that game and, that issue with flags didn’t disappear in their road game against the 1A Panthers of Russellville.

Their offense did make the road trip and the Scotties beat the Panthers 49-35 for their first win of the young season.

Russellville was coming off a convincing 45-0 shutout win of their own against Butler County. The Panthers have 14 seniors on their 2021 roster. Eight of those seniors took advantage of the senate bill that allowed them to return this year. Plenty of student athletes in all sports at schools all over Kentucky took advantage of the bill including four seniors from GHS in football.

The game was a back-and-forth battle until late in the game when Glasgow got some separation.

GHS took the opening kickoff. It looked like the Scotties would hit pay dirt early, but quarterback John Carter Myers’ touchdown run was nullified because of a penalty against the Panthers that the officials called before the play (dead ball penalty).

A few plays later, co-quarterback Easton Jessie, threw an interception on 2nd and 12. The Panthers took over but not for long. Connor Davis blocked a punt and GHS scored from the 4-yard line on a run by Hunter Scott. Luke Allen’s kick was good, and the Scotties led 7-0.

Glasgow looked like it would pad that lead on their final possession of the 1st quarter. The first of three un-sportsman-like penalties on Glasgow killed that primo opportunity to score from the 8-yard line.

RCHS took over on downs after a failed 4th down play. The Panthers tied the game at 7-7 and led 14-7 after recovering a GHS fumble.

Myers scrambled from out of the pocket on a strong run to give GHS a 1st down on the 18-yard line. Keiran Stockton rushed 11 yards to the end zone after a run by Scott setting up the TD. RCHS got their first un-sportsman-like penalty. After the penalty was assessed pushing the football half the distance to the goal, Coach Jeff Garmon elected to go for the 2-point conversion. Stockton got the call again and Glasgow took a 15-14 lead.

Gavin Neal had his second long kick return of the night giving the Scotties prime field position at the 35. Andrew Phillips had a nice 18-yard catch getting the Scotties closer.

Myers bulled his way to the 3-yard line. Another TD was called back on a GHS flag and with 23.9 remaining in the first half, Jessie hit Hunter Scott on a fade route for a 21-yard TD catch. GHS led 21-20. Stockton scored on the 2-point try and Glasgow led 23-20 at the half.

Myers got his first of 2 interceptions on the night going sky high to make the grab. A Glasgow fumble gave it right back.

Neal got a huge sack with RCHS facing 4th and 6.

Stockton rambled 43 yards for the next Glasgow score, but the PAT kick was blocked. Glasgow led 35-27 with 1:30.

A Panther screen gave RCHS good field position. The Panthers scored after a GHS penalty to tie the game at 35-35.

Myers rumbled for another big play and first down. Jessie used his legs too, for a nice pickup before Scott went off tackle for his third touchdown of the game. Myers rushed for the 2-point conversion and the Scotties led 43-35.

Clint Maulden recovered a fumble on the kick to give the Scotties back the football.

Scott scored his fourth TD of the game and Glasgow won 49-35. Myers second interception helped to seal the victory. Myer’s interception was another great athletic feat as he dove to make the grab.

The Scotties will have to clean up the penalties. The three personal foul flags and two pass interferences hurt the Scotties plus they had an additional 4 flags of the 5-yard variety.

Glasgow will host Monroe County this Friday night at 7:00 PM.