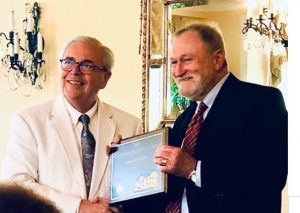 Special to the Barren County Progress

Circuit Judge Phillip R. Patton (ret.), has received the 2021 Chief Justice’s Special Service Award for his work as a circuit judge for Barren and Metcalfe counties and for overseeing cases in the Green River Region as a retired judge.

“Judge Patton, I am confident I speak on behalf of the entire Kentucky Court of Justice when I say a heartfelt thank you for the tremendous service you have provided,” Chief Justice of Kentucky John D. Minton Jr. said while presenting the award.

Judge Patton was honored during the Kentucky Bar Association Awards Banquet on June 30 at The Club at Olde Stone in Bowling Green. The award is presented annually for extraordinary dedication to the Commonwealth and the Kentucky Court of Justice.

“I very much appreciate this recognition from Chief Justice Minton,” Judge Patton said.

Judge Patton served as a Circuit Court Judge for the 43rd Judicial Circuit of Barren and Metcalfe Counties from 2001-2015. He joined the Retired Judges Program in January 2016, shortly after his retirement from the bench. Retired judges fill in when there’s a judicial vacancy or conflict.

He handles a variety of cases for the 27 counties of the Green River Region, ranging from child custody to capital murder. At times, he’s been the temporary Judge for both District Court and Family Court in Barren and Metcalfe Counties while serving as a Circuit Judge for the 38th Judicial Circuit of Butler, Edmonson, Hancock, and Ohio Counties; the District Judge for the 46th Judicial District of Breckinridge, Grayson, and Meade Counties; and the Circuit Judge for the 10th Judicial Circuit of Hart, Larue and Nelson Counties. He also serves as a felony mediator who assists in resolving circuit criminal cases before they go to trial.

Prior to serving on the bench, Judge Patton was the Commonwealth’s attorney for Barren and Metcalfe from 1993-2001 and, before that, an attorney in private practice for 19 years in Glasgow.

Judge Patton has also been an actor in amateur theater productions and is a guitar player and singer. He and his wife, Margie, have fostered more than 1,000 animals since 1991 through their local animal shelter.

“Regardless of how you know him, I am confident that, like me, you appreciate his patience, his temperament, his good judgment, his commitment to his community, his love for his family, and, especially, his friendship,” Chief Justice Minton said.

Judge Patton received a bachelor’s and a master’s degree in political science from the University of Kentucky and a Juris Doctor from the UK J. David Rosenberg College of Law. He has served on the Prosecutors Advisory Council, the Kentucky Humanities Council, and the UK Board of Trustees. He has been recognized for his work as an attorney and a member of his community. He was named Outstanding Commonwealth’s Attorney in 1996 and 2001 and Prosecutor of the Year in 1999. He received the Distinguished Jurist Award from the UK Law Alumni Association in 2010. That year, he was also named Outstanding Citizen by the Barren County Chamber of Commerce.

He and Margie have two daughters and four grandchildren.

The Supreme Court is the state court of last resort and the final interpreter of Kentucky law. Seven justices sit on the Supreme Court and all seven justices rule on appeals that come before the court. The justices are elected from seven appellate districts and serve eight-year terms. A chief justice, chosen for a four-year term by fellow justices, is the administrative head of the state’s court system and is responsible for its operation. The Supreme Court may order a ruling or opinion to be published, which means that the ruling becomes the case law governing all similar cases in the future in Kentucky.