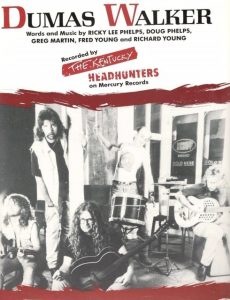 The Kentucky Headhunters and their song, “Dumas Walker,” inspired by Clay County native Dumas Walker, will be honored by the State of Tennessee with a new “Tennessee Music Pathways” marker in Celina, Tennessee.

The unveiling is set to take place on Wednesday, August 18 at 2 p.m. on the lawn of the Historic Clay County Courthouse. The public is invited to attend, during which the Kentucky Headhunters will be special guests.

The following article is reprinted by permission from Country Reunion Magazine.

“Well, let’s all go down to Dumas Walker’s.” This intriguing invitation is the first line of 1990 hit song ”Dumas Walker” by Country rock band The Kentucky Headhunters.

Written by the band’s members at the time, Doug Phelps, Fred K. Young, Gregory Glen Martin, Richard Oren Young, and Ricky Lee Phelps, the song almost did not make it onto their 1989 debut album, “Pickin’ on Nashville,” because their record label believed the story was to regional to have any national appeal. The band insisted, and the catchy tune became a No. 15 hit that stayed on the charts for 26 weeks.

“What they didn’t see, was the reaction we got to it every night that we played it in front of a crowd, and it didn’t matter where we were playing either,” Doug Phelps said in a 2007 interview on the Liberty ‘n’ Justice website. “What we discovered was that there was a Dumas Walker’s in most everyone’s life, and by the time you added a good groove to it, people were hooked!”

Yes, Dumas Walker’s was a real store, and there actually was a man named Dumas Walker who owned it. According to Phelps, Walker lived and owned a package store just across the Kentucky/Tennessee line at Moss, Tennessee, an unincorporated community also known nationally for its log home manufacturer, Honest Abe Log Homes.

“Dumas Walker’s was a place where you could buy beer, snacks, fireworks on the 4th of July and just a small place where the old-timers could hang and visit,” said Phelps, who was not originally from the area. “It was a part of the Kentucky boys’ lives growing up, and we just decided to write a song about it and him as sort of an ‘ode to Dumas.’”

Walker was a world champion marble player for the game of Rolley Hole. The game is a team sport competed in by adults with handmade marbles. Walker was so good that people would come from miles away to watch him play. The National Rolley Hole Marble Tournament is held each September at Standing Stone State Park to preserve and celebrate this traditional game.

In the song’s lyrics, a couple go to Dumas Walker’s after seeing a movie at the local drive-in.

“Got a pocketful of money, and I’m rarin’ to go down to Dumas Walker right after the show,” says the narrator. “They’ll be shootin’ marbles in the back of the store and laying money down on the floor.”

The song paints Walker as a bit crotchety, saying that the old man doesn’t like young folks hanging around.

“He’s quick to let you know we got a law in this town. You ought to see him grinnin’ when he walks through the door. The marble king is ready for more.”

Walker was 74 years old when the Headhunters, some of whom had known Walker since they were children, convinced him to show his marble skills in their video for “Dumas Walker’s.” Headhunter Richard Oren Young recalled some of his memories about Walker in an interview on songtek.com.