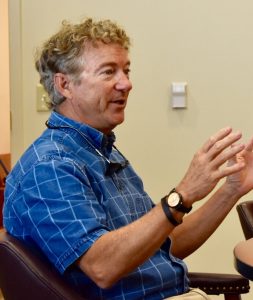 Last Friday at an informal roundtable discussion, local leaders had a chance to discuss hot topics with Kentucky Senator (R), Dr. Rand Paul. The gathering was held at the Metcalfe County Justice Center. Some of the most popular topics involved COVID’s long-term impact on economic recovery, the divide in Washington, education, vaccination, and life as we know it in America.

Paul’s stance on masks in schools has been lauded as irrational, but in contrast, it’s supported by scientific findings.

“I don’t think we can go on forever asking children to wear masks in schools. It is stifling them. The cloth masks don’t work, and the N95 masks do, and there is a place for those,” he said.

He also pointed out that from a percentages standpoint, few children are affected.

“There is a greater chance that a child will die of a lightning strike than COVID, so by that logic all children should have to go to school carrying a lightning rod for their protection,” he said, as a comparison to the response to COVID.

On the subject of forced vaccinations, Paul’s stance is clear: He is against it.

“Whether or not a person gets a vaccine it’s up to them, I’m not here to say get it or don’t get it. But your medical decision should be your own. Not the governments,” he said.

When it came to economic matters, Paul was eager to stress that nothing is free, speaking of stimulus packages and bailout expenditures.

“We will pay for this in inflation and taxes,” Paul said.

He also added that wasteful spending had to be curbed. He spoke specifically of the costly electric car charging stations that government plans to build.

“They will use billions of dollars and by the time they get done in ten years they will be outdated, because that is the way governments do things,” Paul said.