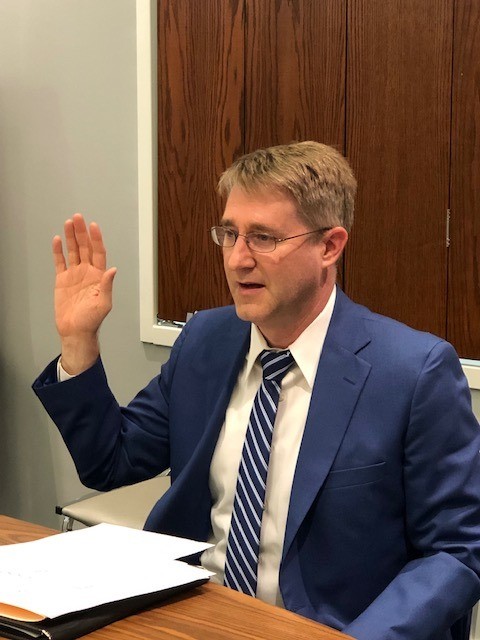 The council found it necessary to appoint a City Attorney after the previous Attorney Sharon B. Howard presented her resigned to Mayor Doug Smith on July 20.

Mayor Doug Smith recommended Attorney Brian Pack to the council members to fill the position stating, “I believe Mr. Pack will be a great asset to the City of Edmonton.”

The council quickly agreed and voted for the recommendation.

Mr. Pack asked to address the council, “Here’s how I do things because it’s very important that you understand it. I go by Kentucky Legal Ethics. Those are not negotiable either personally or professionally. What that means is when I represent intensity, I am the attorney for the City of Edmonton. I am not any one of you all’s personal attorney. I’m not the personal attorney to the mayor or any councilperson. I represent this entity. What that means is there is an attorney-client privilege that does apply to that, as the third party. However, among you all there is none.”

He went on to explain what has happened previously as an example, “I’ll have a board member or council person call me and say ‘hey, I’m gonna tell you something, but I don’t want you to tell the others.’ I can’t do that. I cannot keep secrets among you all, nor will I. So don’t ask me to. It will not happen.”

“You will find that my yes is my yes my no is my no…I will give you my good faith opinion and I’m happy to have discussions regarding opinion…I don’t mind to go back and re-research things to make sure I’m right…If I’m going to be your city attorney, those are the rules that I govern myself and will hold you all to…I’m glad to serve and I’ll do my best.”

Mayor Smith then swore in Brian Pack as the City Attorney for Edmonton.

Each department head presented their July reports after which a closed session was held to discuss personnel matters with no action taken.

Councilmember Curt Estes update the council on a Barren-Metcalfe 911 Board. He stated that the board wanted to consolidate the Metcalfe 911 Center with Barren’s 911 Center, claiming money as the reason. However, the salaries are paid through the City of Edmonton budget and Metcalfe is currently gathering data to present against this merge. He also advised that he resigned from the Metcalfe County Fire Dept Board as he felt it was a conflict of interest.

City Clerk Dawn Devore presented an update on the American Rescue Relief Plan. The City of Edmonton has been allotted $413, 039.61 based on population, and the city recently received the first half $206,519.81. There are specific ways the money can be used and those will be discussed at a later meeting.

Attorney Brian Pack being sworn in as Edmonton City Attorney by Mayor Smith.