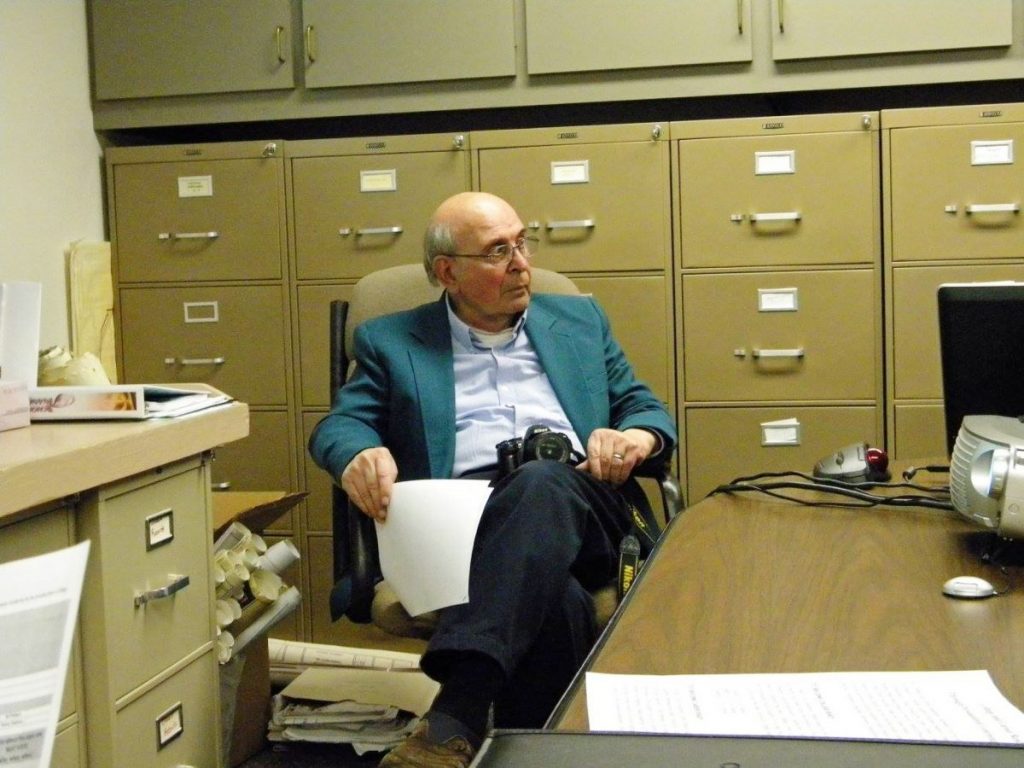 Jerry Matera served Hart County, the City of Horse Cave, and The Hart County News-Herald for over 50 years.

The Hart County News-Herald is bidding farewell to one of its longest-tenured and most dedicated individuals, as Editor Emeritus Jerry Matera is leaving.

Jerry, who has dedicated the last 50 years in service to the community, will be moving to Minnesota with his wife, Ann. 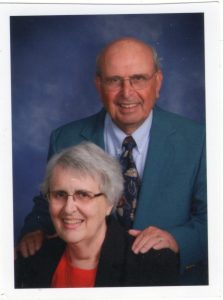 A native of White Plains, New York, Jerry graduated from high school in 1959. He then attended Mount Saint Mary College, graduating in 1963. Jerry went on to attend Temple University on a scholarship for three years, earning his Master’s Degree. While at Temple, he met Ann and the two wed in Philadelphia in 1964. 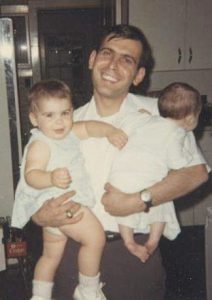 Jerry Matera with his daughters Corinth and Elizabeth.

Jerry returned with Ann, a Hart County native, to her hometown of Horse Cave where they have resided together since 1966 and raised two daughters, Corinth and Elizabeth.

Jerry first began working for the newspaper in 1971 and has worked in a variety of positions as a reporter, photographer, and editor, experiencing first-hand how the industry has changed through the years.

“I was taking the newspaper to Elizabethtown and then to Campbellsville and then to Shelbyville to get printed until we bought our own printer,” Jerry said. “We used Polaroids, took pictures with Polaroid cameras.”

When people say something is their life’s work, it’s generally hyperbole. But in Jerry’s case, you couldn’t describe it any other way.

He has spent countless hours each week over the past five decades attending City Council and Fiscal Court meetings, school board meetings, award ceremonies, beauty pageants, and countless other events.

Jerry said that he always looked forward to covering local meetings, taking notes, and writing the articles. As for his favorite writings, he always enjoyed penning his weekly column, which occasionally focused on topics considered controversial for the local area. However, he pulled no punches and stood strong in his sometimes unpopular stances.

“I wrote quite a few columns. I enjoyed writing those,” Jerry said. “I wrote one about changing heads of states and how it was so great that this country was doing it peacefully, and that came back to haunt me. I’ve written about climate change and the need to do something about guns, and I got calls about guns. When I wrote about guns, I always got calls.”

After working for the newspaper for some time, Jerry left and worked for the school system. However, he soon found himself covering local news yet again.

“After I retired from the school system, Jeff Jobe hired me full-time with the newspaper,” Jerry said.

Hart County is the only newspaper that Jerry has ever worked for, serving 30 of his years at the newspaper as the Editor.

Not only did he make his mark in print each week, but Jerry also had a hand in many other aspects of the county, even serving as Community Education Director, Adult Education Director, and as Solid Waste Part-Time Director. Since 1994, Jerry, his wife Ann, and his brother-in-law Tom Chaney have owned The Bookstore in downtown Horse Cave.

“We had a restaurant in The Bookstore for a while, and then we gave up the restaurant part of it and just served coffee and books,” Jerry said. “We have books and coffee now.”

Although a native New Yorker, Jerry has spent the past 55 years in Horse Cave, taking great pride in being a part of the community. He has seen the city change over the years, but hopes that it will continue to grow and thrive in years to come.

“I think we’re a tourism area, and we can continue to do that if we fill all of the stores and buildings with tourism-type businesses,” he continued. “I think it will grow that way. The cave has been a big part of the tourism and growing and it will continue that way. Dave (Foster) is a good director, and he has done some things, adding the zipline, and that has helped keep the cave growing and has attracted more people. We get a lot of people from the cave come here (to The Bookstore).”

As Jerry will be leaving Hart County next weekend, he said he there are some things he will certainly miss.

As for the newspaper itself, Jerry said it will continue on.

“It’s gonna go on. The newspaper is going to go on without me,” he said. “It’s going to go on in a different way. The young lady that’s putting the paper together, and you (Mary Beth) do a good job.”

“I appreciated the work I did,” Jerry added. “I always enjoyed it. I enjoy every day I went to work…But I’m old enough to where I’m going to take it easy for a while.”

On behalf of Jobe Publishing, Inc., everyone at the Hart County News-Herald wish both Jerry and Ann farewell and wish them a new journey filled with good health and many unforgettable memories ahead. 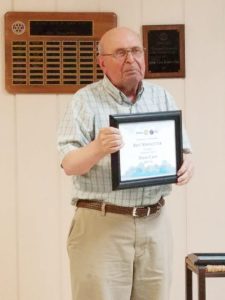 This is one of the many times that Jerry Matera was recognized for the Horse Cave Rotary Club having the Best Newsletter in Rotary District 6710. 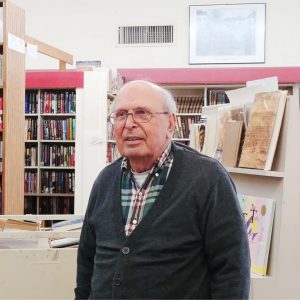 Jerry Matera at The Bookstore 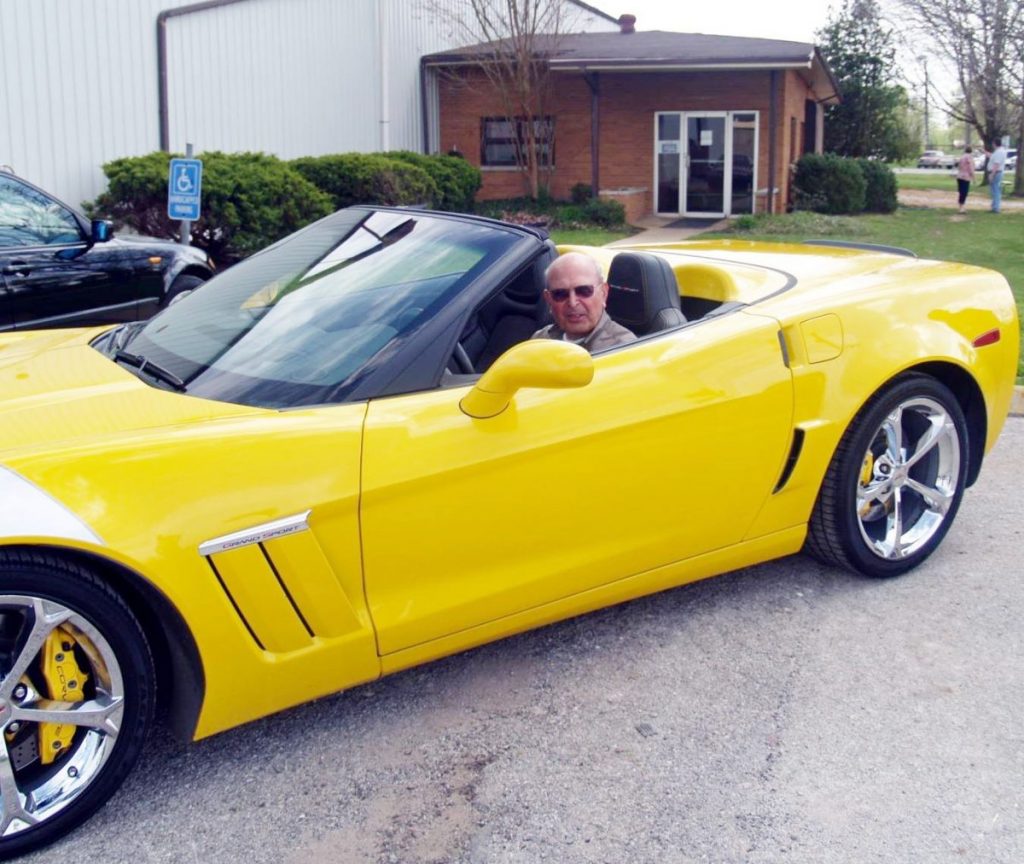 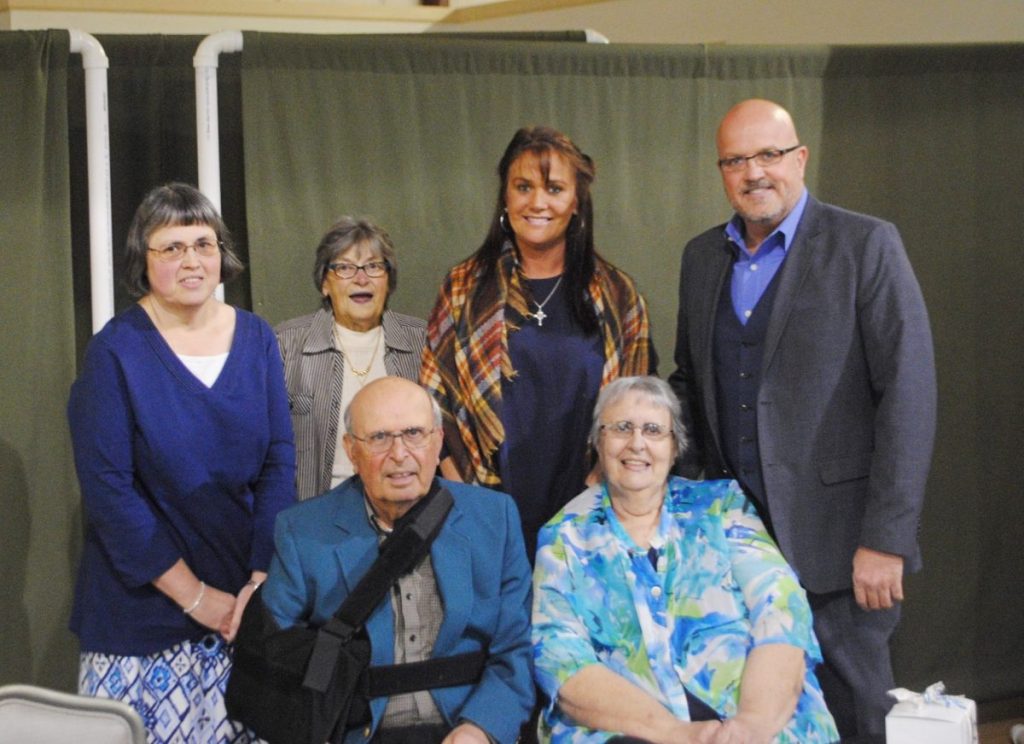 In 2016, Jerry and Ann Matera, front, were presented with the Lifetime Achievement Award at the annual Hart County Chamber Banquet. With Jerry and Ann were, back row from left, Lesia Logsdon, Barbara Logsdon, Darca Jobe, and Jeff Jobe