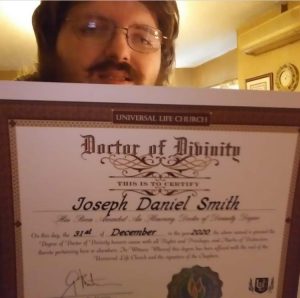 South Central Kentucky poet, Rev. Joseph D. Smith, D.D. found his affinity for poetry in 2003 as a teenager. At the time he didn’t see it as a way to earn a living; He saw it as a way to get girls’ attention.

“The very first poem I wrote, however, was titled The Cat and The Gnat while I was 9 years old. But after that, I didn’t write another poem until my high school years” Smith said. “To be honest, I thought it would be a good way to get in good with the girls. I thought by showing my sensitive side I would find a girlfriend.”

Smith, who is autistic, finds that he has better self-expression through the written word.

“I definitely find it is easier to communicate via writing, especially since I tend to have more time to prepare my speech and thoughts. If you’ve ever talked to me in person over the phone, my speech can be so jumbled, and I tend to speak in the wrong tense. Writing poems is the easiest way to communicate even when I read them out loud,” he said.

Smith says poetry is the easiest way for him to help others understand what he’s thinking and feeling. Without the written word, he has found communication to be a struggle.

“The way autism tends to affect my writing is more towards having an awkward use of the English language if I don’t do anything to make an effort to correct it. It is a huge cornerstone of people like me who were originally diagnosed with Asperger’s Syndrome several years before the disorder was merged with Autism Spectrum Disorder,” said Smith.

Smith has come a long way since high school and his poetry is now available for purchase (plus a few freebies) online at Medium. His subject matter is diverse and life-inspired. He says that his love of learning has especially influenced the way he picks subjects to write about.

“I am a jack of all trades kinda person, interested in just about anything and everything. I love to learn and that shows in my poems. Whatever I am feeling the strongest about is what I tend to write poems about,” said Smith.

He says he writes his best poetry when he feels the most inspired.

Smith says his poetry helps others to feel, and that is his goal.

“The way I help people feel while writing my poems is by putting my deepest, sincerest feelings of my own into every ounce of my poems. I can definitely make the readers of my poetry feel whatever I want them to feel,” he said.