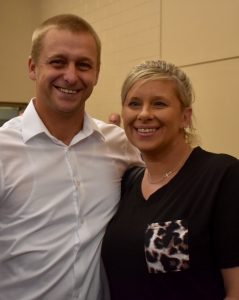 Brandon Riddle and his wife Brandi. Photo by Jennifer Moonsong

When one hears an echo, it’s something they’ve sent out into the world returning to them. It is the same with the ECHO Award, which honors good deeds by those not seeking recognition.

“This is the first ECHO award presented in some time. “This is not something given out haphazardly,” Hale said.

The ECHO award, which stands for Everyday Citizens Helping Others, was created in 2016. It was a byproduct of a conversation between Judge Hale, and his friend Jackie Brown, about ways to reach out to the “overlooked” population.

Brown asked how to define “overlooked.”

“I explained that I was not talking about the homeless or any other group of individuals who people often think to help. I was talking about those who are truly overlooked,” Hale said.

Specifically, he was referring to individuals who had spent time in jail, especially associated with addiction, and who re-entered the world without a clear path ahead of them.

With the help of former jailer Matt Mutter, a small group was formed.

“We as a group began speaking to inmates two weeks prior to the release,” Hale said.

They discussed what resources were available and what barriers were there when it came to getting life back on track. They partnered with probation and parole, workforce development, and representatives from drug court to help create a network of support.

The problem of addiction and re-entry to normal life is one that has interested the judge himself because of his time with the ambulance service and fire department. “I have seen these individuals in their very combative state, I’ve had my hands on them when they’re coming down off of the drugs,” he said.

The program has proven helpful to many, but Brandon Riddle is a case of definite success.

“Brandon had been in and out of the facility. After we met, he reached out to me as soon as he came out. He got a job at a factory. He was determined to hold onto that job. He was promoted, and that promotion really helped. Now he owns his own business,” said Hale.

Brandon was also very successful at the social aspect of re-entering normal life. He took the advice of mentors about not associating with former associates.

“One thing we’ve talked about and one thing we’ve asked inmates is ‘have you seen any of your friends since you’ve been in here?’ They never have. But we explain that they’ll be ready to suck them right back into their old life when they walk out of those doors.”

Brandon did not get sucked back into the old ways. He has not only succeeded in getting a job, a stable relationship, and an addiction for existence. He has turn lemons into lemonade by using his experiences to help others.

“Anytime he can get in front of a group of individuals to talk about his experience and try to help them, he does it,” Hale said.

Brandon has spoken at churches, jails, and any other available platforms to help others.

“I prayed to God and I told him that if I were to get through this, I would spend the rest of my life helping other people with addictions,” said Riddle.

It’s a promise he has kept.

Hale said COVID changed the nature of the program because they couldn’t physically go into the jail and speak, but it has certainly not stopped it.

“We always keep some form of communication once they leave the facility,” said Hale. “Brandon has been the perfect of example of how it works to help others.” 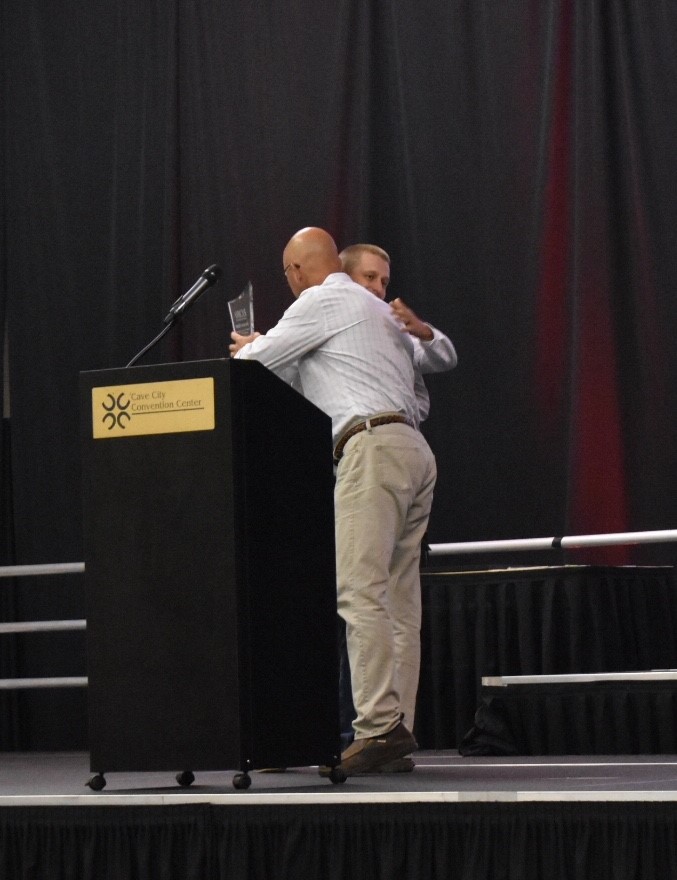 Judge Hale and Brandon Riddle, as Riddle was honored with the ECHO award. Photo by Jennifer Moonsong