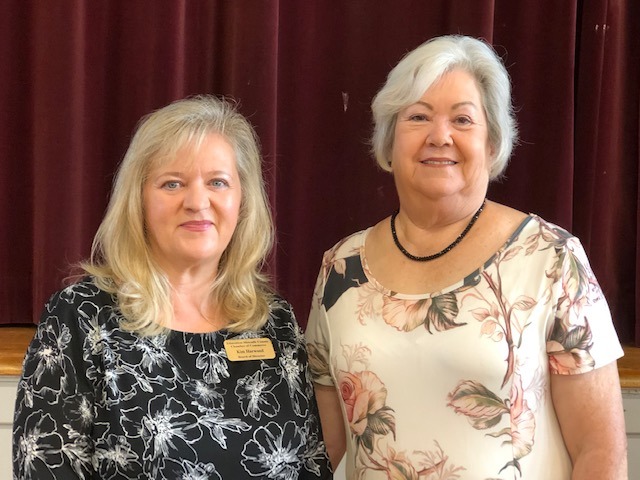 The Edmonton-Metcalfe County Chamber of Commerce pulled in another record crowd at their summer quarterly breakfast on Tuesday morning last week.

The announcement at the end caught almost everyone off guard as Chamber Board President Torrie Osbon formally announced the retirement of Executive Director Gaye Shaw.

After 27 years as the Executive Director Gaye has decided to retire and spend more time with her nine grandchildren. She will remain in the office part-time this year while mentoring Kim Harwood who officially fills the position on January 1, 2022.

The ever modest Gaye spoke to the crowd, many of which have become good friends during her 27 years of service, saying, “It’s not me that has made this chamber, it’s you.”

She made light of the moment, despite emotions by saying, “I want to go while I still feel like I’m doing a halfway decent job. I don’t want to be that little old lady that everybody’s thinking, ‘Oh my gosh, when’s she gonna leave. When’s she gonna die!’ I just want to slow down a little bit and enjoy my family.” 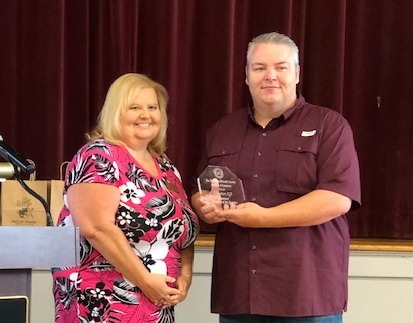 Osbon next introduced Kim Harwood as Gaye’s successor. Kim has worked many years for Health and Family Services in Edmonton. Kim noted, “There is no way that I can ever begin to do the job that Mrs. Gaye Shaw did for this community, but I am certainly going to give 100 percent. Give you everything that I have, and with your help, I’m sure we can grow and make this county proud.”

The Summer Business of the Quarter award was presented to IGA. Accepting the award was Manager Eric Matney. “This is a pretty amazing community…I wake up every morning and I’m happy to come serve folks. We’re here to help the community grow. Thanks.”

Guest speaker for the breakfast was KY Legal Aid Benefits Director Bobbie Esters who explained the many services their office provides to a 35-county area. 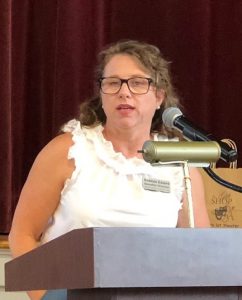 KY Legal Aid is a grant-funded, not-for-profit organization established in 1977. Esters answered the ‘what do we do question’ by stating, “We try to assist and enable low income, disabled, and elderly individuals in South Central and Western Kentucky to solve legal problems and remove barriers to self-sufficiency and to provide these individuals an opportunity for improved quality of life.”

The offices provide help with health and public benefits, victim’s rights, family custody rights, money and debt, and elder law. They can be reached at their website https://www.klaid.org/our-offices.

The quarterly breakfast not only offers a great meal, but it also offers an opportunity for fellowship and networking among city, county, and state office workers, school officials, community leaders, and citizens of the community.

The breakfast sponsor was Barn Lot Theater and Executive Director Kyle Hadley announced that as of the prior day the theater paid off its loans and 100 percent owns the TOPPS building recently purchased. “That’s our next 40+ years here in Metcalfe County. Our goal is to put at least one theater space, possibly two in there. Consolidating our offices, our warehousing, and make it a true community arts center.”

Once remodeled, Barn Lot Theater plans to have events in the building year round in public rooms and classroom suites for all types of events. Hadley also announced that the theater will be holding a Christmas Gala and bringing back the ‘Barnie Award’ plus many others on December 14th.

He noted that as of the last show over 1,000 people came into Metcalfe County, and out of those, almost 50 percent said it was their first time coming to Metcalfe County. Adding that theater is almost a billion dollar industry in Kentucky. Tourism information states that each person coming into another county to attend a show spends on average $32 per person excluding box office revenue.

As previously, the delicious breakfast was catered by Diane’s Cakes and Catering. 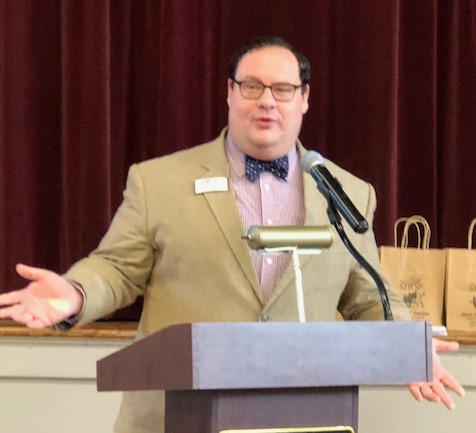