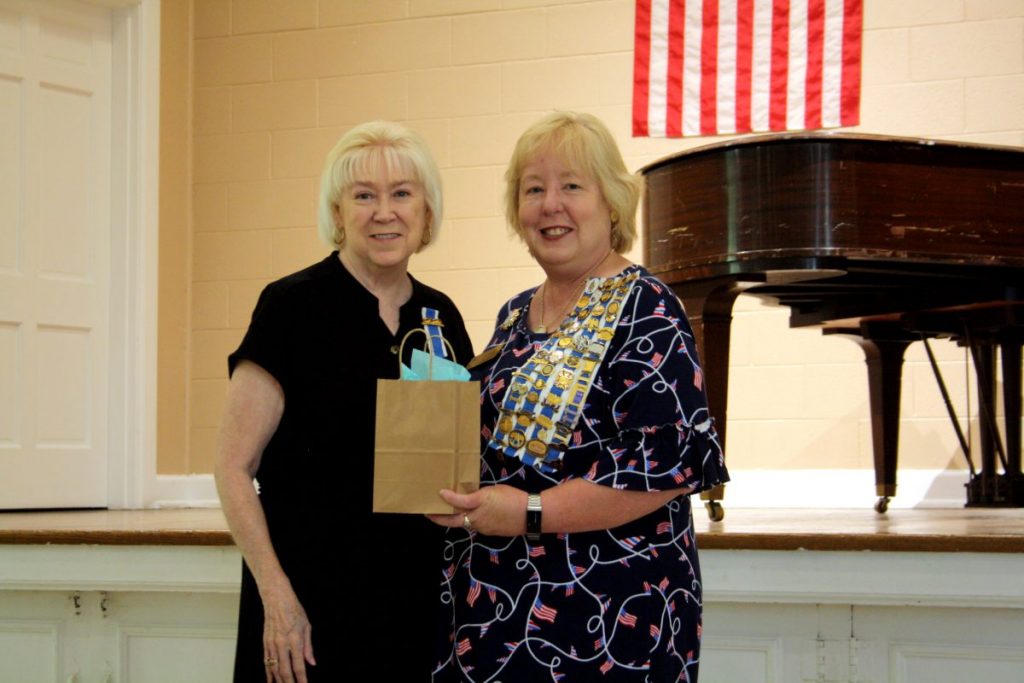 Daughters of the American Revolution members, award recipients, and guests gathered at the Lera B. Mitchell Clubhouse on Saturday, June 12, for the final meeting of the 2020-2021 season. The meeting began with a warm welcome by Chapter Regent June Jackson and then was joined by Chaplain Maude Isenberg to conduct the opening ceremony. Anne Miller led the assembly in the Pledge of Allegiance and Matilda Botwin led the recitation of the American’s Creed.

Despite pandemic restrictions that canceled some planned programs, the members carried on projects remotely and with great success. The Edmund Rogers Chapter received several letters and cards of appreciation, summarized for the audience by Regent June.  Chemawa High School and Bacone College, the two residential Indian schools to which we send gift cards, gifts, and donations sincerely thanked our patriotic organization for continued support. These items may have been the only Christmas gifts these students received.  Military Missions gratefully conveyed thanks for the Project Patriot Committee’s timely shipment of 1180 pounds of useful gifts received in time for the holidays. Corresponding Secretary Judye Hafling sent thanks to all of our members for our calls, cards, emails, and prayers following the death of her husband Sonny.

Judye and several others who are also members of the Metcalfe County Historical Society were absent from this DAR function in order to serve residents and visitors of the City of Edmonton on the occasion of an open house at the Old County Courthouse Museum.

Isabella Bastien, a Glasgow High School senior and member of the Longhunters Society, Children of the American Revolution, sponsored by the Edmund Rogers Chapter, NSDAR, sent greetings as President of from the Kentucky State Society C.A.R.

Second District Director Julia Ann Hood presented greetings from KSDAR and spoke about the history of our Flag and Flag Day.  Julia Ann currently serves as the Chapter Regent of the Corn Island Chapter, NSDAR.

The meeting was suspended and a blessing was offered by Chaplain Maude for a delicious lunch catered by FAB Studios & Catering Company. Following a delightful interlude of good food and convivial conversation, the meeting reconvened. First Vice Regent Frenchie Belcher introduced three new members: Dianne Bowman, Vickie Bryant, and Sandra Claywell who were led in the DAR Oath of Membership by Chaplain Maude.

The awards ceremony began with the presentation by 1st Vice Regent Frenchie Belcher of the Women in the Arts award to Peggy Goodman in recognition of her achievements as an author of children’s books.

Cherie Vaughan presented the DAR Community Service award to Leah Groenwald in recognition of her numerous beautifully hand-crafted quilts which she has donated to the Wounded Warriors Project, Courageous Kids, Hospice, Glenview Healthcare, and the Oncology Department of TJ Samson Hospital.

On a more solemn note, Chaplain Maude Isenberg conducted a Memorial Service for four deceased members who passed away during the past year:  Carol Joan Robbins Wills, Claudette Leora Amburgey Morgan, Charlotte Joy Bowles Rigdon, and Jo Ann Bradley. Each woman was remembered in words and silent prayers and a candle was lit in memory for each.  Several family members were able to attend the memorial.

Program planning by the Executive Committee has already begun and regular meetings for 2021-2022 will resume in September.  Members were reminded of a grave marking ceremony for Revolutionary War Patriot Abraham Hestand that will take place in the Old Mulkey Meeting House graveyard in Monroe County on October 30, 2021. A DAR memorial emblem will be placed on the new stone erected as the location of the original grave marker is unknown. The public is welcome to attend. Following the Benediction by Chaplain Maude, the meeting was adjourned by Regent June.

We encourage any woman over the age of 18 who is interested in learning more about membership requirements for the Daughters of the American Revolution to visit our website at www.edmundrogers.org for more information about the local chapter, State and National DAR organization. Guests are always welcome at meetings and programs. 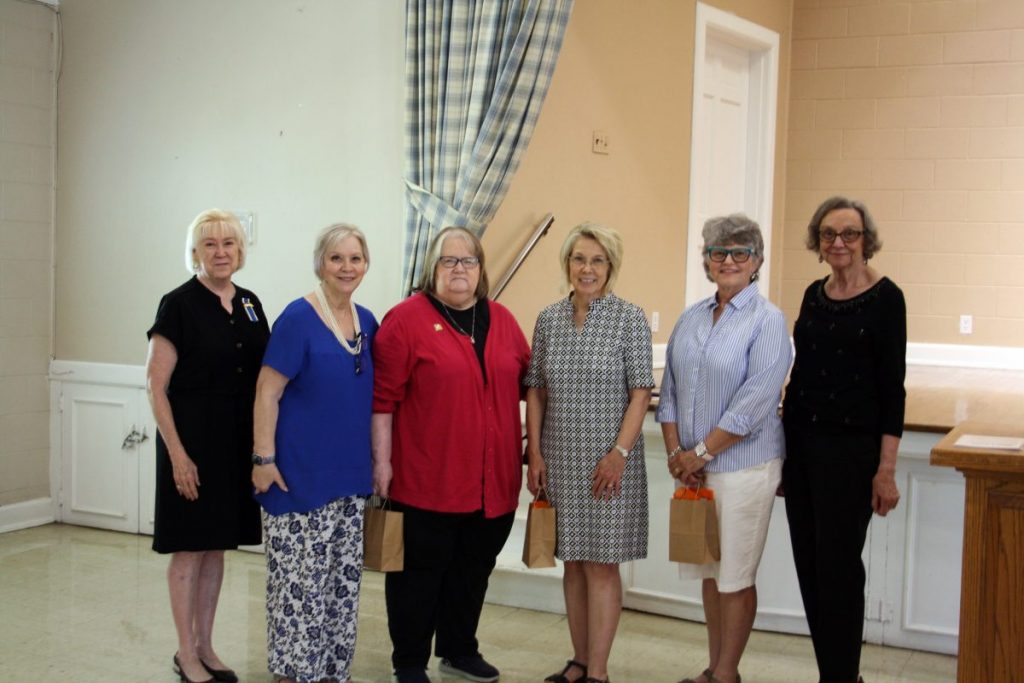 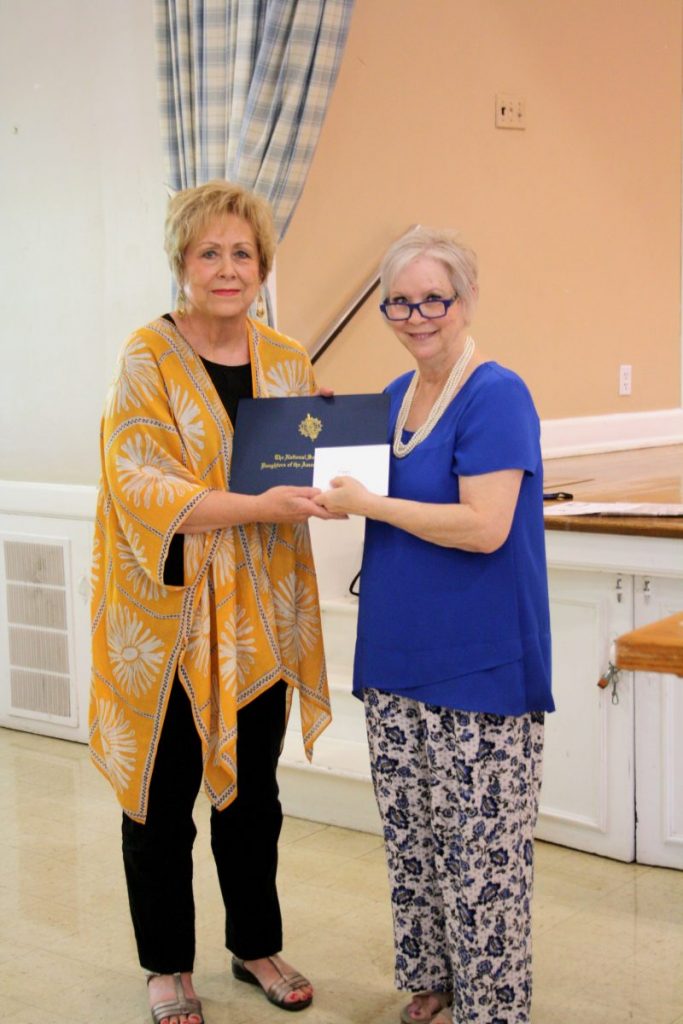 Frenchie Belcher and Peggy Goodman – Women in the Arts award. 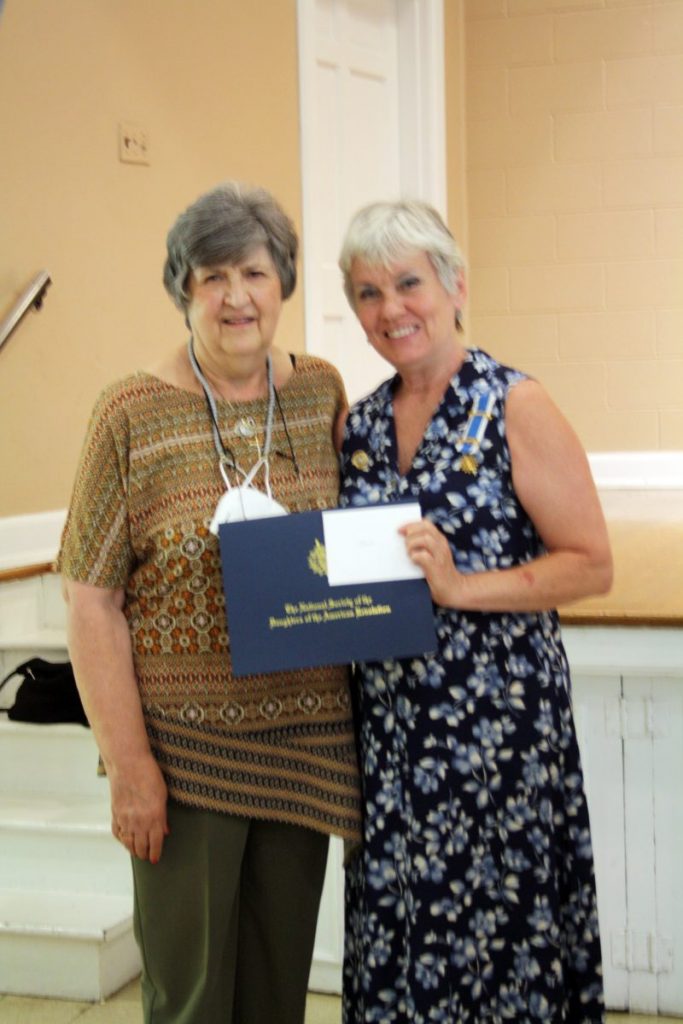 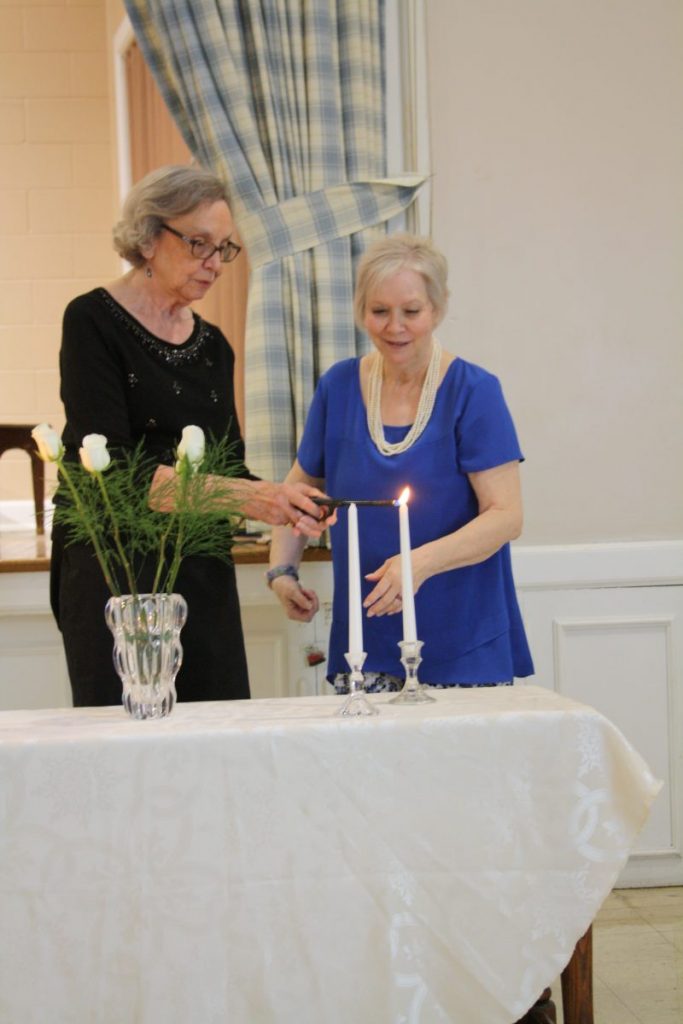 Maude and Frenchie at the Memorial candle table.