Bro. Randall, a Baptist preacher and retired school bus driver with the Hart County School System, was diagnosed with COVID-19 in December of 2020.

“We were kinda nervous, but dad was the picture of health at 70-years-old,” said Grace Walters, Bro. Randall’s daughter. “He was on no medications and had nothing wrong, still working or piddling from sun up to sun down, so we kind of thought it would run its course and everything would be fine.”

But on January 1, 2021, Bro. Randall was transported by his son to the Medical Center at Bowling Green. After being diagnosed with COVID-19 the week prior, Bro. Randall’s condition had progressively grown worse.

“It was scary, especially when he had to quarantine for 21 days, and we couldn’t be with him at all,” Grace said. “He would FaceTime us and the nurses would be in his room in full COVID gear. They looked like spacesuits. Every day he FaceTimed us, he seemed a little worse until finally the last time before his first intubation. He group called mom and us three kids every day, but this time it was to tell us he’d have to be ventilated. It was heart breaking.”

After Bro. Randall was ventilated, the nurses would set an iPad up and let Grace and the rest of the family see him.

“He looked asleep and couldn’t talk, of course,” Grace recalled. “It was horrible to see him lay that way and not be able to be with him.”

After the 21-day quarantine and the ventilator was removed, Bro. Randall’s family was allowed to visit. It was the first time his family had been allowed to physically be with him since he was first admitted to the hospital. It was a moment of joy and relief – but a moment that didn’t last long.

Bro. Randall’s health took a turn for the worse, and he was intubated yet again. All his family could do was sit with him, sing gospel songs, and talk to him as much as they could.

“He was intubated four different times,” Grace said. “And three times the doctors called us in to turn off the machine and said he would never breathe on his own and there would be no quality of life. Each time after they would call us in, he would show us some kind of response, and we prayed and decided to keep fighting.”

It was God, Grace said, who kept the Kessinger family – and Bro. Randall – holding on.

By God’s mercy and grace, Bro. Randall was released from the hospital and returned home on June 30, 2021.

“Hart County Sheriff deputies met him at Munfordville depot, and later Cub Run Fire Department joined in to escort him to his home in Cub Run,” Grace said. “When he got to his road, the roads were lined with friends and family to welcome him back to his home. Dad immediately bowed on the porch to thank the Lord for bringing him back home.”

Grace stated that her entire family was truly blessed with support from the entire community during this difficult time.

“People brought us meals and showed friendship all throughout his hospital stay,” Grace said. “Neighbors even kept his yard mowed, and many have stepped in to continue helping now that he is home by setting up things like a meal train…Our family is very thankful for all of the support, prayers, food, monetary donations, and services provided to us.”

Although he is now home, Grace said that her dad continues to struggle each day but also continues to persevere.

“He is still on oxygen, and any use of his body causes his oxygen to drop fast,” she explained. “He walks with a walker when he can, and other times uses a wheel chair. His mobility was severely affected from laying six months in hospital bed, and then his lung capacity is greatly affected, causing him not to be able to breathe well if he exerts himself at all.”

“Him being home is a sigh of relief, although it’s hard to see him not be able to do the things he once did and loved to do,” Grace added. “I’m just hoping and praying he gets stronger every day…He still has a long road ahead of him, but we are praising God for bringing him this far and trusting in Him to carry Dad on farther.” 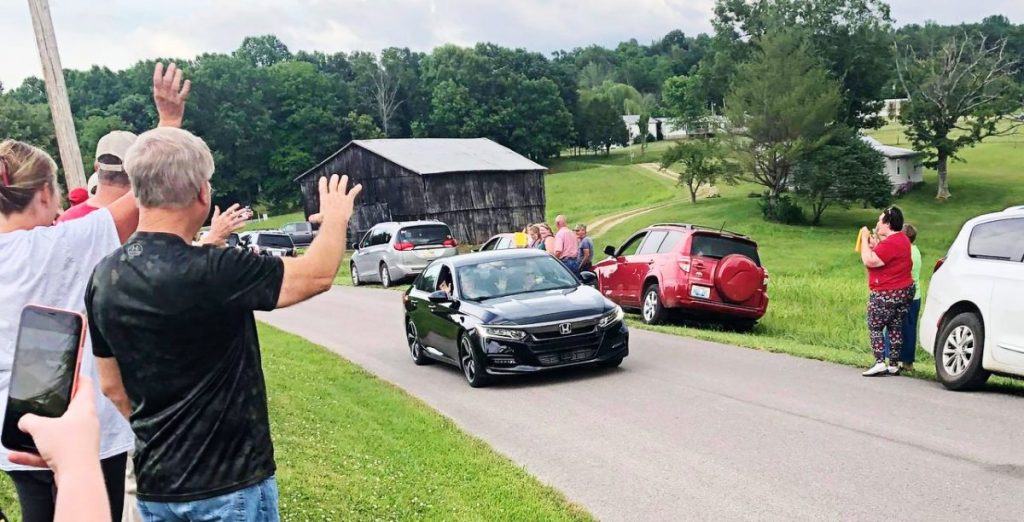 Members of the community lined the roadside as a way to celebrate Bro. Randall Kessinger returning home. Photo submitted. 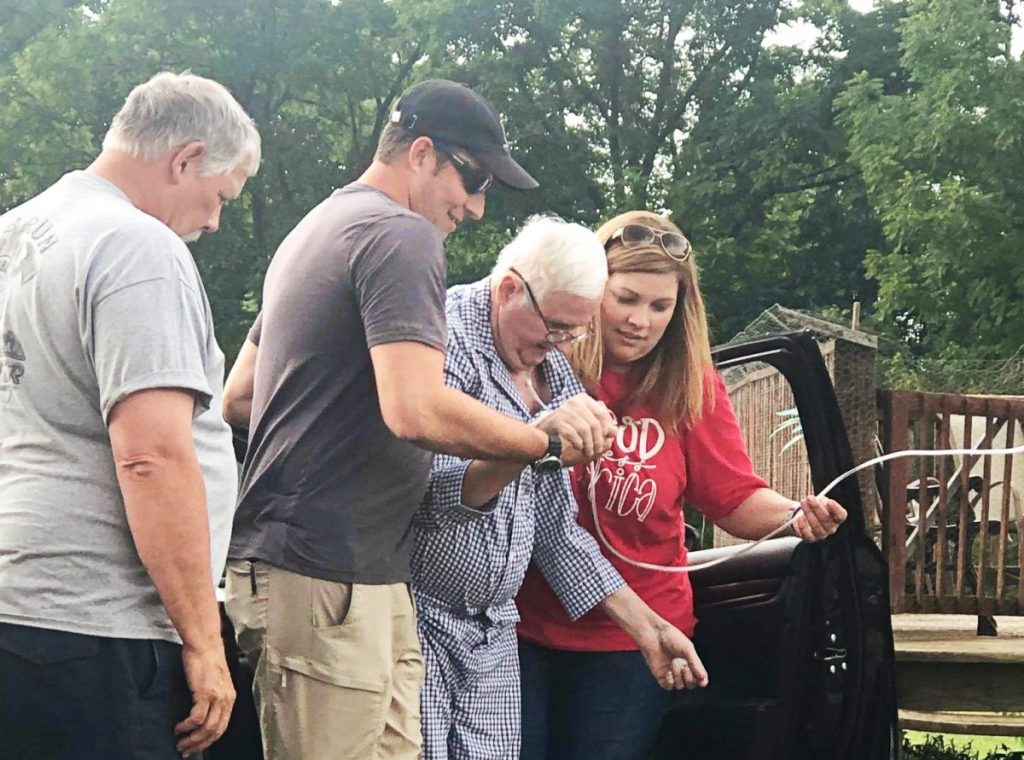 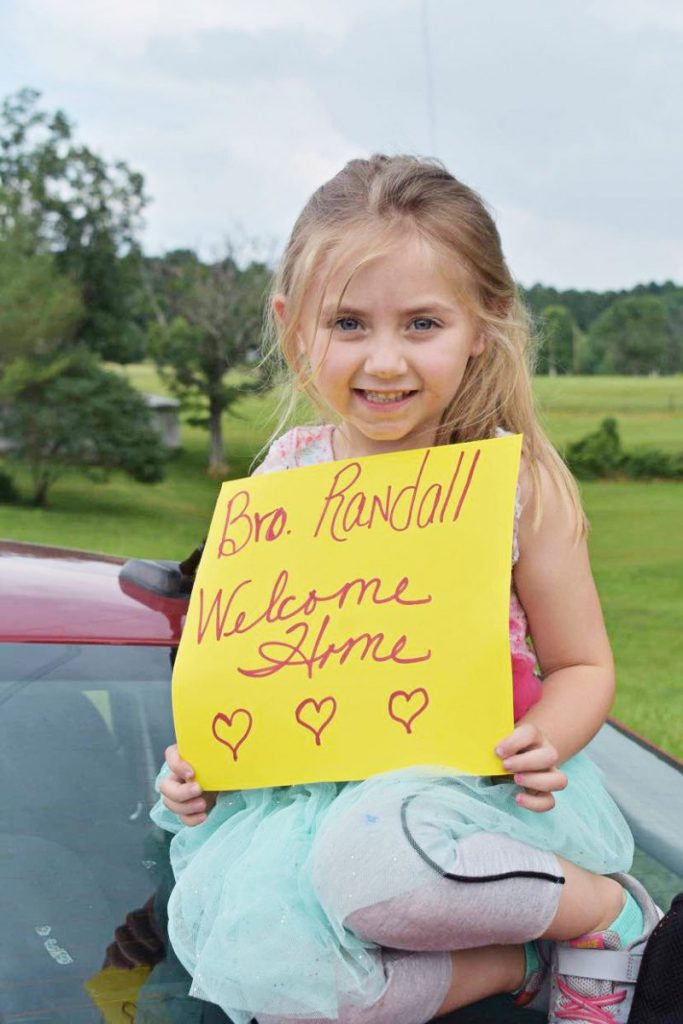 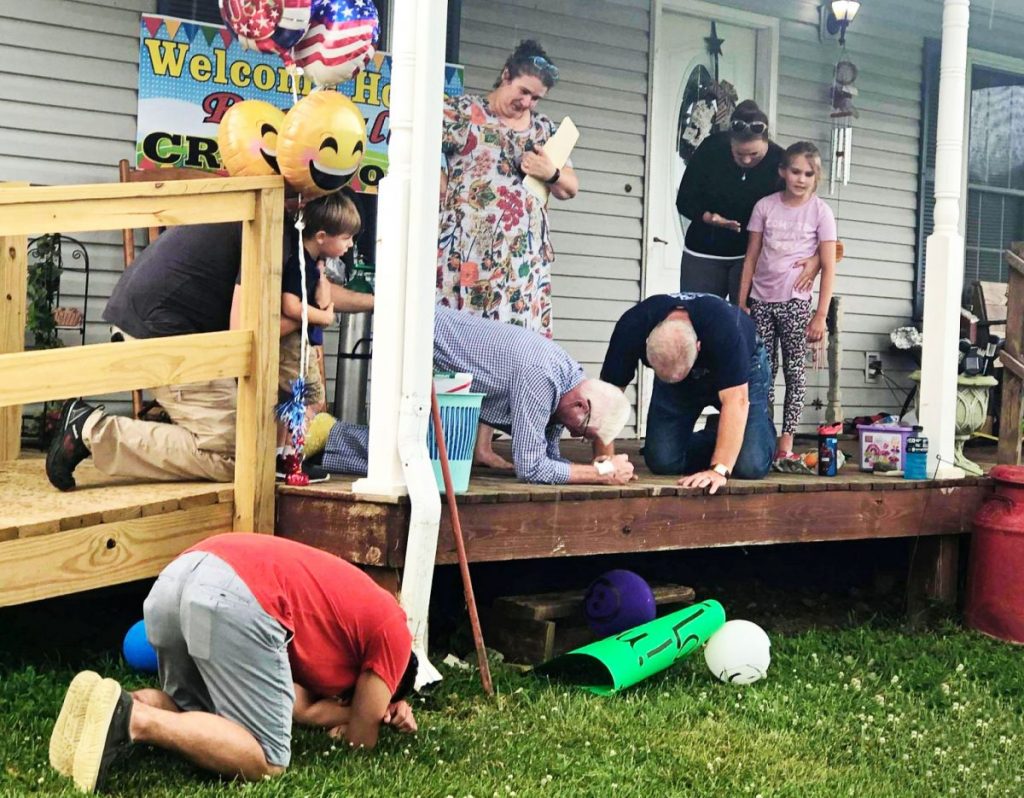 The first thing that Bro. Randall Kessinger did when he returned home is kneel down on his porch to pray. On the porch, from left: Bro. Randall’s son, Jonathan Kessinger, grandson, Andrew Kessinger, wife, Denise Kessinger, Bro. Randall himself, friend, Marion Pettit, daughter, Sarah Weber, and granddaughter, Brooklyn Walters. Kneeling on the ground is his son-in-law Jonathan Walters. Photo submitted.