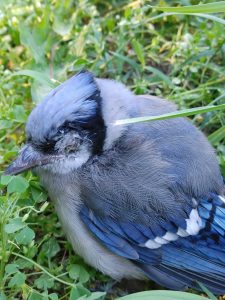 An mysterious illness is affecting birds within six states. Birds, like this blue jay, have experienced eye swelling and crusty discharge. Photo by Ginger Rood.

Across the eastern United States, hundreds of birds have been dying from a mysterious illness. Wildlife experts are unsure of the cause.

The illness among birds within the state began in late May as the Kentucky Department of Fish and Wildlife Resources (KDFWR) began receiving reports of sick and dying birds. The birds have experienced eye swelling and crusty discharge, with blindness in some cases. There are also signs of neurological impairment among the affected birds, including stumbling around, trembling, stargazing with necks bent back or contorted in a strange way, and rapid eye movement.

KDFWR has sent more than 20 samples from the deceased birds to the Southeastern Cooperative Wildlife Disease Study at the University of Georgia for diagnostic lab testing. The typical turnaround time for such testing is four to six weeks.

Dr. Christine Casey, State Wildlife Veterinarian with KDFWR, stated in a video update on June 23 that reports of sick and dying birds within Kentucky have come primarily from Jefferson, Boone, and Kenton counties. The species of birds that have mostly been affected by the unknown illness include blue jays, European starlings,and common grackles. However, other species may be affected as well.

“There have been a handful of reports in other species, which has also been our priority to get those and test them and make sure that it’s not impacting more (bird species),” Casey said. “…We haven’t been able to come up with one definitive answer, so right now we’re kind of exploring all possibilities, and we’re just waiting on results.”

Thus far, the KDFWR has received approximately 700 reports of birds that have exhibited symptoms of the unknown illness. The department has managed to investigate 400 of those reports thus far.

“That doesn’t necessarily mean that there are 700 reports of birds related to this event,” Casey explained. “We have to now go through and kind of sort out what is suspicious or possibly related to this mortality event because a lot of the times people may see dying birds, but it could just be normal cause of death. There’s always trauma incidences and other issues that cause bird mortality.”

Concerns have been expressed regarding if poultry, such as chickens, could possibly contract the unidentified illness.

“Right now, we haven’t been getting any reports from those species,” Casey said. “It does appear really to be limited to these songbirds…these three species…We haven’t seen anything in poultry-type birds.”

The bird illness began to appear at approximately the same time when cicadas emerged. As sick and deceased birds have been found in areas where there are cicadas present, some experts have acknowledged the theory that birds may be eating cicadas that are infected with a fungus that rots their bodies. However, sick birds have also been found in areas where no cicadas have emerged.

“Both us here in Kentucky and Virginia have collected cicadas and submitted them,” Casey said. “These were cicadas that were found in the area…At this point, all possibilities are being explored. There’s been weirder things that have happened, so we don’t want to ignore something that could be a possibility. I don’t want to say that it’s not, but who knows at this point. We are testing for it though.”

“But in general, some of us are leaning more towards this could be an emerging kind of bacterial infection,” Casey continued. “There are other bacterial infections in other species that are similar to these symptoms…That’s really what we’re sorting through is trying to find those similarities across the states where we’re seeing consistent things…If there’s a new pathogen out there or maybe it’s an old one in a new species or maybe it’s a toxin…All possibilities are being explored at this point.”

In April of this year, the Center for Disease Control and Prevention (CDC) announced a Salmonella Typhimurium outbreak in songbirds, such as  goldfinches and pine siskins, that had been linked to some cases in humans. This was believed to be caused by uncleaned bird feeders.

However, the salmonella incident and the current unknown illness do not seem to be related at this time.

Birds that are congregating at feeders and baths can transmit disease to one another. Therefore, KDFWR recommends that the public in Jefferson, Boone and Kenton counties cease feeding birds until further notice.

The department is also encouraging everyone across the entire state to clean feeders and birdbaths with a 10% bleach solution immediately and then continue to do so once a week thereafter.

As a standard precaution, pets should be kept away from sick or dead birds.

Everyone should avoid handling birds, but if handling a bird is necessary then disposable gloves should be worn. If a dead bird must be removed, it is recommended that it be placed in a sealable plastic bag and the bag then be disposed of in a secured outdoor trash can.

The public can access Kentucky’s reporting system online at www.research.net/r/2021KYSickBirdReports or through the Bird Mortality Event webpage on the department’s website at fw.ky.gov.

The Kentucky Department of Fish and Wildlife Resources will post additional information on its Wildlife Health and Disease webpage and social media channels as lab results become available. 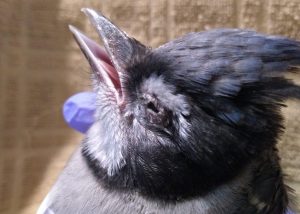 Birds, such as blue jays, have been displaying symptoms of neurological impairment, including trembling and rapid eye movement. Photo by Brian Wiehoff.