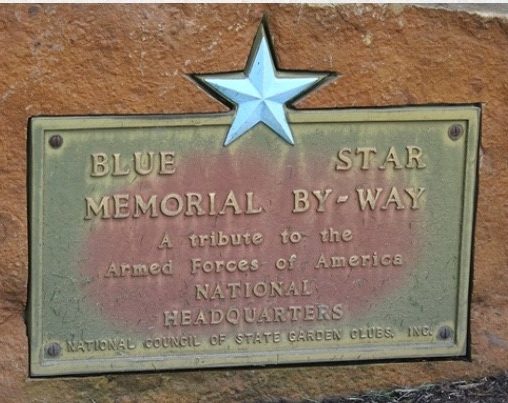 Pictured is an example of what the marker will look like.

The Glasgow Garden Club is pleased to announce that it will soon unveil and dedicate a Blue Star Memorial Marker at the Beulah Nunn Park on the square in Glasgow.

According to the club’s president Glenda Eaton, gaining this prestigious marker which honors Armed Forces who have defended the United States of America has been quite a journey.

“Someone approached me and asked if we might get a Blue Star Memorial in Glasgow. I didn’t know anything about it so I started doing my research,” said Eaton.

What Eaton discovered was that not only is it an honor, it is something that must be approved by the State Garden Club, and the National Garden Club.

The Blue Star Program honors all men and women that serve in the United States Armed Services. This program began with the planting of 8,000 Dogwood trees by the New Jersey Council of Garden Clubs in 1944, as a living memorial to veterans of World War II. In 1945, the National Council of State Garden Clubs adopted this program and began a Blue Star Highway system that covers thousands of miles across the Continental United States, Alaska, and Hawaii. Blue Star Memorial Highway Markers were placed along the way. The Blue Star was adopted because it had become an icon in World War II and was seen on flags and banners in homes for sons and daughters away at war as well as in churches and businesses.

“After approval I began to gather money, and we are very proud to be able to have this,” she said. The process took about six months.

The marker will be unveiled on the morning of July 9th at 10 a.m. at the Beulah Nunn Park. A reception will follow the unveiling, and the community is invited to this momentous occasion.