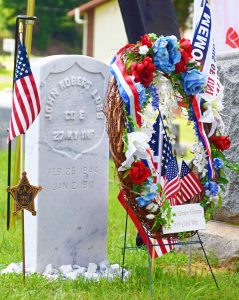 Members of the Lobb family, as well as several friends, were in attendance to pay tribute to the veteran soldier as he received a new headstone honoring his service to the nation.

Arlene Lobb Mattingly, Johnny’s great-granddaughter, set the entire process in motion beginning in 2019 when she contacted Col. Tracy Lucas of Camp Nelson who then directed her to the Department of Veteran Affairs. Arlene then completed an application for Johnny to receive a new headstone.

With the help and support of Jack Mills and the Sons of the Union Veterans of the Civil War Camp 5, as well as Greg Ard and the 3rd Kentucky Regiment re-enactors, the stone was constructed and placed in 2020.

Finally, the day came on June 13, 2021 when the headstone could be revealed and Johnny could receive the honor he so well-deserved.

Arlene then spoke about her great-grandfather’s life, specifically his time of service during the Civil War. 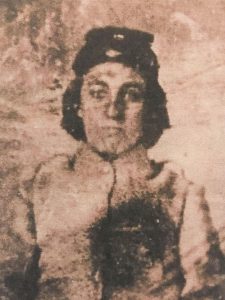 On October 12, 1861 at the young age of 18, Johnny traveled to Rochester, Ky., and enlisted in the Union Army. He served as a Private in Company E, 27th Infantry of the Kentucky Volunteers.

Johnny, who was later referred to by his family as Grand Pap, told a story to his grandchildren over the years about his time in the war.

In November of 1863, Johnny and his fellow infantrymen were trapped for 18 days by Confederate soldiers on Lookout Mountain near Chattanooga, Tenn.

With Confederate soldiers in pursuit, Johnny and other Union Soldiers rode their horses as far up on the mountain as they could. They then dismounted their horses, tied them, and traveled by foot further up the mountain.

Food and water was scarce. After 15 days, their Captain asked for a volunteer to carry a message down the mountain with plans to be captured by the enemy. The message was a ruse, with the hopes that the Confederates would believe that a thousand or more Union troops were on their way to reinforce and resupply the men. Within 24 hours, Johnny and his fellow soldiers could see the Confederates retreating.

The story goes that as Johnny and the others made their way back down the mountain, they found that their horses had all starved to death at the spot where they were tied. The volunteer who had delivered the message to the Confederates was never seen nor heard from ever again.

General Joseph Hooker and two corp of Union soldiers arrived to relieve the besieged General William Rosecrans and his men. They drove the Confederates down the mountain and claimed a victory that would be known as the Battle Above the Clouds.

The Union forces subsequently captured Chattanooga and gained control of the Tennessee River and the railroad. This allowed for the Confederate supply line to be cut off, paving the way for a Union victory at Missionary Ridge.

On May 31, 1864, Johnny was injured in the Battle of Burnt Hickory near Kingston, Ga. After receiving treatment at a hospital, he returned to his company and then was honorably discharge on March 19, 1865.

The Civil War Union Veteran returned home to Hammondsville and began farming. Johnny then married Elizabeth Burge, and they had 6 children. Johnny’s youngest son, Bird Lobb, is the father of Curtis Lobb and the grandfather of Arlene, who set the recent stone dedication ceremony in motion. Johnny died on January 2, 1911.

After Arlene spoke at the recent event, family members unveiled the stone and also laid a wreath.

The Honor Guard Firing Salute was held by the E.P. Marrs #5 S.U.V.C.W.-S.V.R. & 3rd Kentucky Reg. Re-Enactors, followed by the presentation of a Civil War period flag to Arlene and the benediction by Rev. Lane.

The ceremony was an honorable way to recognize Pvt. John Robert “Johnny” Lobb and his service to his nation. 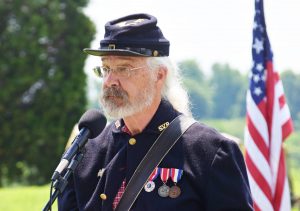 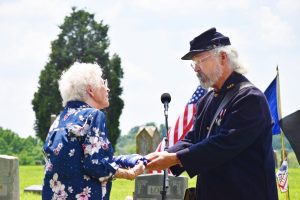 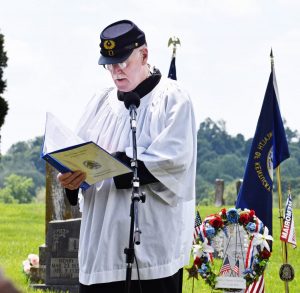 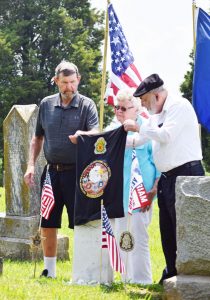 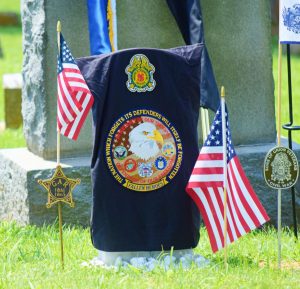