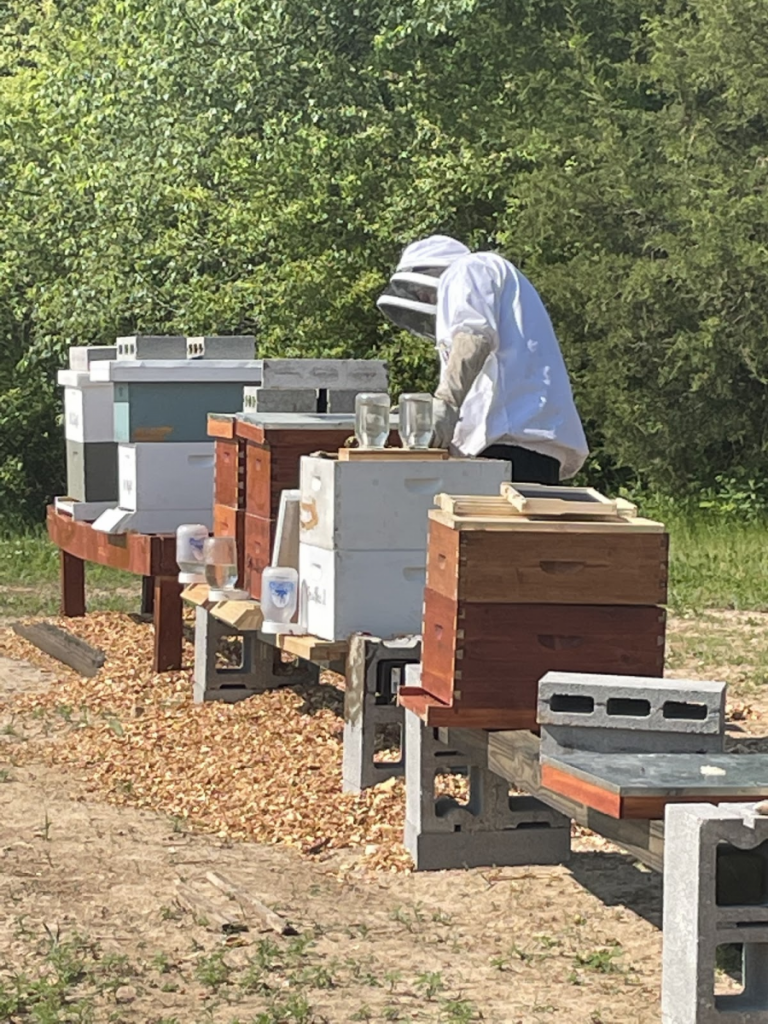 When many people think of warmer months, blooming dogwood trees and March lilies are the visions which come to mind.

However, spring is also the most important time of year for honey bees, as well as the busiest time. This is the time of the year when they restock food and when colonies become active.

Keeping bees is an interesting hobby, enjoyed by a handful of Hart Countians, scattered from Munfordville to Hardyville, Cub Run to Legrande, and many areas in between. Beekeepers share one important opinion: honeybees are a crucial part of our agriculture. Honey bees are responsible for 80% of pollination, so without them, crops would suffer dire consequences.

In case you’ve ever wondered why you might suddenly see a swarm of bees on a fence post or on the side of an old tree in the spring, it’s because in the spring, with the birth of new queens, colonies typically split in half. One queen will take half of the hive and swarm.

When honey bees are swarming, they have no food or larvae to protect, so they’re typically very gentle. If you have a swarm suddenly appear on your farm, chances are they’re just resting and will move along shortly. If you need a swarm removed quickly, call any beekeeper. They’d be delighted to take them off your hands.

David Smith, owner of Blue’s Bee Lodge #318 near Hardyville, has been beekeeping since 2019. He currently has 4 active hives, which he checks at least every 10 days to ensure the queen is laying and that there are no visible signs of distress.

Smith said he has always been fascinated with bees and their communal behavior.

Like all beekeepers, Smith firmly believes that honey bees are friendly and do not want to sting people. Bees only sting if you disrupt their hive, and they are protecting their queen.

That doesn’t mean beekeepers don’t get stung, but occasional bee stings tend to become part of the job description.

“Bee stings are actually healthy,” Smith said. “The venom contains many anti-inflammatory properties. An estimated 18 to 20 naturally occurring antibiotics and antivirals can be found in the ensuing concoction (of a bee sting), along with anti-inflammatory and pain reduction substances. Bee stings can also trigger reactions in the human body that generate healing properties that would otherwise remain dormant.”

“Bees are gentle creatures, and will only sting as a last resort,” agreed Wesley England, fellow Hardyville beekeeper. “Honey bees shouldn’t be put in the same category of dangerous, scary insects. Only 1-3% of the population experience an anaphylactic reaction to bee stings.”

England currently has 6 active hives and has learned about beekeeping through mentors, forums, conferences, and books. He considers learning about bees to be an interesting challenge.

“If people took time to learn about honey bees, they’d be amazed,” England said. “For example, a worker bee can visit around 2,000 flowers or more per day, and it only takes an ounce of honey to fuel a bee’s flight around the world.”

“They’re the most amazing little creatures, and the more you fool with them, the more amazing they seem,” said Grayling Hiser, a beekeeper in the Monroe Community.

Grayling and his wife Jessie have been beekeeping for 5 years and currently have 15 hives. They have alternated sewing their fields in buckwheat, sunflowers, and clover over the years to see which crops the bees prefer and which ones produce the best honey.

When newborn bees are 1-2 days old, they clean the cells and keep the unhatched baby bees warm. At 3-5 days old, they feed the older larvae, and at 6-11 days old, they feed the youngest larvae. By 12-17 days, they are producing wax, building honeycomb, and serving as undertaker bees, carrying dead bees away from the hive. At 18-21 days, they protect the hive and do guard duty at the entrances. From day 22 on (up to around 40-45 days), they fly from the hive and collect pollen, nectar, and water.

“I think another thing people don’t realize is when they think of bees, they just think of honey,” said Jessie. “There are so many other things that are beneficial from a bee.”

Both honey and wax contain antibacterial, antibiotic, and antifungal properties, making bee products and byproducts amazing natural remedies for varieties of ailments from regulating blood sugar to lowering cholesterol. Honey has even been shown to boost the immune system and promote digestive health.

“I wish more people knew that bees are our lifeblood,” Grayling said. “Without bees, there are no fruits, there are no vegetables, there’s no hay… Don’t kill the bees. They may be intimidating, but they’re not going to hurt you. Call a beekeeper. We’ll come get them.”

“Without bees our planet will die,” reminded Smith. “We need bees to pollinate plants and to keep oxygen fresh in our atmosphere. That’s their main job, and they do it very well. No bees, no life. Know bees, know life.” 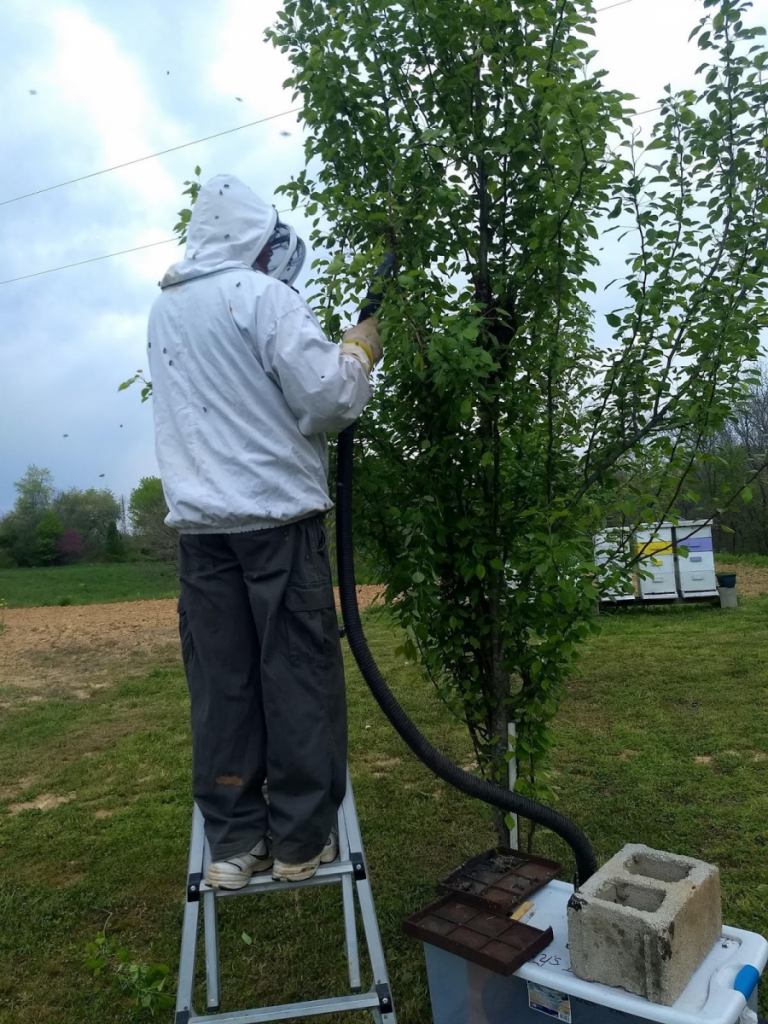 According to Grayling Hiser, one thing all beekeepers can agree on is that honeybees are unpredictable. Photo Submitted 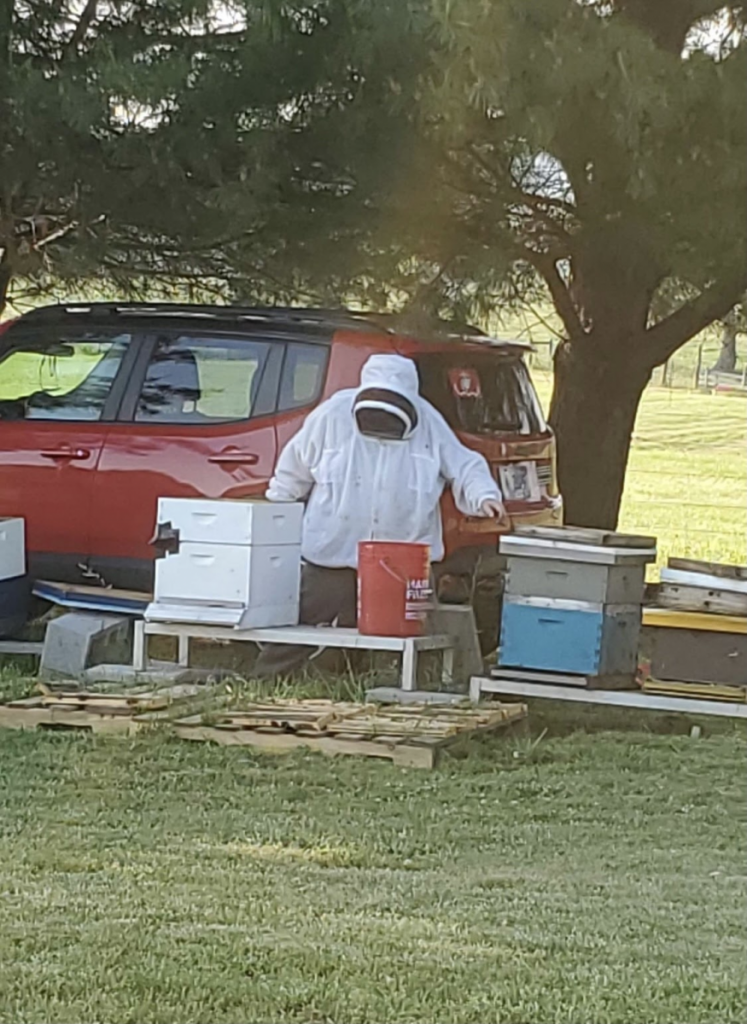 David Smith checks on his hives at least every 10 days. Photo Submitted