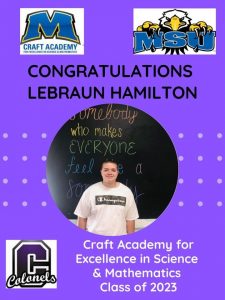 Overcoming Obstacles and Striving for Greatness

When LeBraun Hamilton first began his application process for The Craft Academy, he was nervous. He had faced his share of obstacles within his academics and personal life.

But with the help and encouragement of his parents, teachers, and Assistant Superintendent Amanda Abell, LeBraun refocused on academics and began working on an essay about his career aspirations.

His dedication paid off. LeBraun was accepted into the Craft Academy for Excellence in Science and Mathematics, which is located on the campus of Morehead State University.

The Craft Academy is a dual-credit academy for academically exceptional Kentucky students and provides students with a post-secondary residential experience to complete their junior and senior years of high school by enrolling in college courses.

The academy’s purpose is to meet the unique educational needs of academically gifted and talented high school juniors and seniors in the Commonwealth and also challenges students to excel at their highest level.

“I am mainly excited about experiencing a college-like life on campus,” LeBraun said. “This is a big step, especially for someone my age, but I know it will be very exciting to explore what the campus has to offer and to be educated just like a college student.”

“It is thrilling to have this opportunity to obtain a higher education while enjoying some of the fun things a college has to offer,” added LeBraun. “I feel like this will teach me a lot more about being a responsible and independent person since I will in a way be on my own.”

LeBraun gives credit for his success in both academics and acceptance to The Craft Academy to God, his family, and Ms. Abell.

“LeBraun is an exceptional young man,” said Assistant Superintendent Amanda Abell. “He strives to be a role model for other young men in his community. He has completed many volunteer projects and wants to give back to his community. He is interested in finance, electrical engineering, and computer science. However, his main goal is to help other young leaders understand that it doesn’t matter where you’ve come from or what you’ve been through. You can accomplish anything you set your mind to accomplish.”

As LeBraun plans to move into Morehead State University on August 8, his parents, Bronson and Liz Hamilton, are not only proud of his hard work but also of the challenges he overcame.

“We are proud to know he is not a statistic, but an achiever striving for greatness!” his parents said.