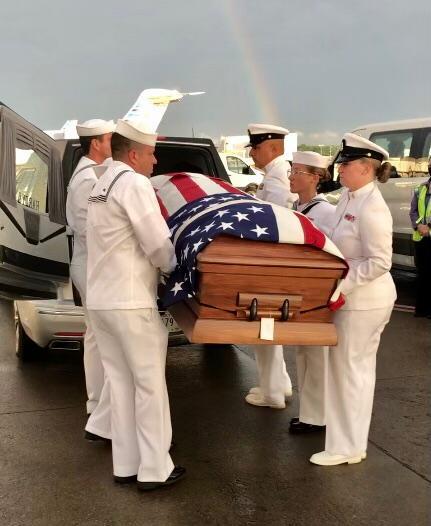 After nearly 80 years, a fallen hero who perished in the attack on Pearl Harbor has finally returned home.

After completing his training, Scott was stationed on the USS Oklahoma in Pearl Harbor. On December 7, 1941, Magers was onboard the USS Oklahoma when the ship was attacked by Japanese forces. Scott was one of the over 429 members that perished that day aboard the ship.

Scott, along with hundreds of others, were buried in mass graves in Honolulu, Hawaii. According to reports, in 2015 the Defense POW/MIS Accounting Agency exhumed the bodies and began the identification process through dental, anthropological analysis, and DNA testing.

Scott was accounted for among those remains, and his living family members worked to bring the fallen hero home.

On May 26, the Navy Seaman 2nd Class arrived at the Nashville Airport where he was then transported to Bowling Green. On May 29, the family held a private service at the Hardy and Son Funeral Home. A graveside service with full military honors was held at the Merry Oaks United Methodist Cemetery.

En route to the graveside service, American flags and yellow ribbons lined the drive up and down 68 towards Merry Oaks. A whole community was coming out to celebrate a hero arriving home. There was a respectful buzz in the atmosphere, as people stood in their yards or on their porch awaiting Scott to arrive at his final resting place.

As the hearse bearing the official United States Navy seal came around the corner and made its way up to the turn towards the cemetery, hats swiftly came off heads, hands where placed on hearts, and Veterans alongside the road stood in salute. One lady pulled over on the side of the road, stood by her car with a hand over her chest and a simple homemade sign in the window of her vehicle that read “Welcome Home”. A respectful silence had fallen over this country side road.

Will Baker, a veteran dressed in full uniform, stood at attention at the end of a driveway on Merry Oaks Payne Road. His expression was solemn and his hand raised in salute as the hearse passed by.

At the cemetery, the casket carrying Scott’s remains was carried by six US Navy sailors in their Service Dress White Uniforms and placed on the catafalque.

The welcome and opening prayer was led by Brother Rick DeVore, a pastor of Oak Forest Baptist Church where Scott was baptized. The obituary itself was read by Scott’s niece, Lori Magers Coffman.

Scott’s story and memories of Scott were presented by his third cousin, retired Lieutenant Colonel Jeffery S. Magers, who was named after Scott. He spoke alongside Paula Ratliff Pedigo, the family spokeswoman and event coordinator. They told the story of a kind and soft-spoken young man who grew up in the simpler times of the 1920s and 1930s of rural Merry Oaks. His time in the community was not long, but it was certainly memorable. Stories of those who grew up with Scott, provided by more than a few individuals who have already passed on themselves, where shared about the cute little blonde headed boy with a heart of gold.

A beautiful rendition of Beulah Land was sung Scott’s great nieces, Stacy Woosley and Amy Arnett, and nephew, Thomas Goodman. Stacy continued on by herself to sing “I’ll Carry You Home” before returning to her seat.

Brother Rick DeVore ended the service with a memorial message and words of encouragement, which included the reading of scripture, Ecclesiastes Chapter 3. At this time, final salutes by veterans and military personnel took place. A long line of individuals formed as they each took their turn to walk up to the casket of Scott Magers to offer one last salute before he was placed in his final resting place. Full military honors, including a 21 gun salute, was performed by Glasgow, KY DAV Chapter #20.

Lori Magers Coffman, Scott’s niece, stated that, “It feels wonderful!” to have Scott back home. She recalled stories told of Scott when she was a child when family would speak about him. She also spoke about growing up with his picture and proclamation on the wall of her childhood home. Coffman explained that her mother has always taken them to the cemetery every Memorial Day to honor Scott and his memory.

At long last full closure comes to a family, a community, and a country that has waited nearly 80 years, for the return of a remarkable young man who left his peaceful small town to serve God and country. He now rests besides his parents, close to the oak trees that surround the property, oak trees that would have been saplings the last time he was there.

On behalf of Jobe Publishing, Inc., may God bless the memories of Scott and his family. May God bless our Veterans, our military, and all first responders, and may God forever bless the United States of America. 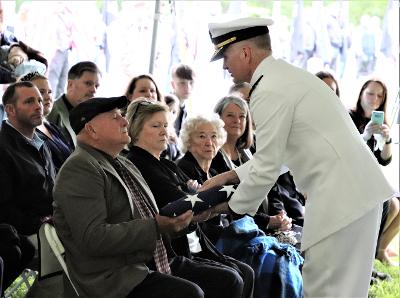 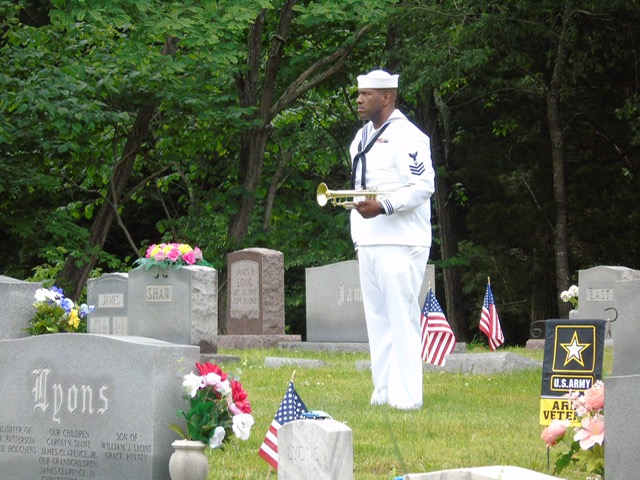 A member of the US Navy participated in the ceremony to honor Harold “Scott” Magers. Photo by JR Jessie. 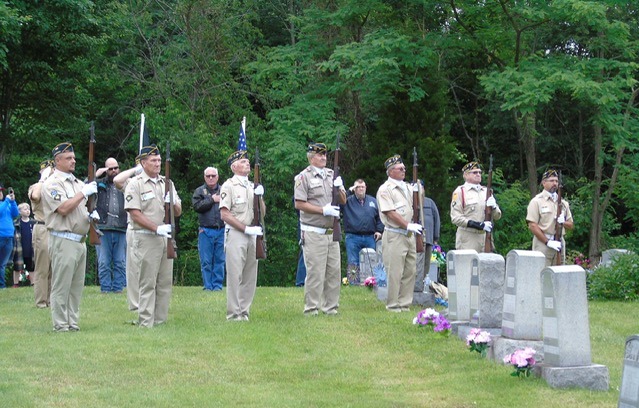 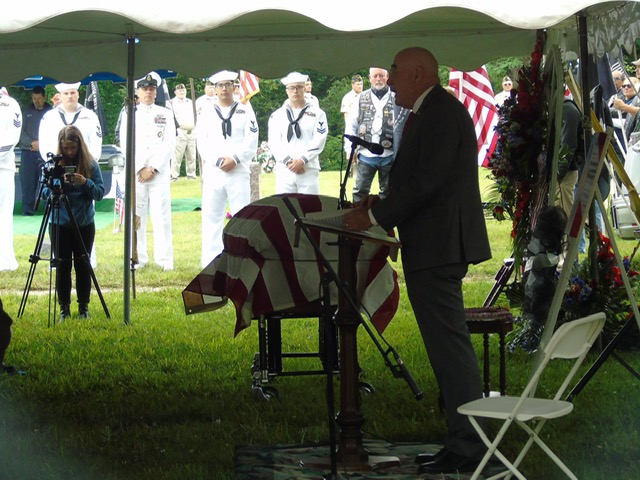 The welcome and opening prayer was led by Rick DeVore, a pastor at Oak Forest Baptist Church where Scott Magers was baptized. Photo by JR Jessie. 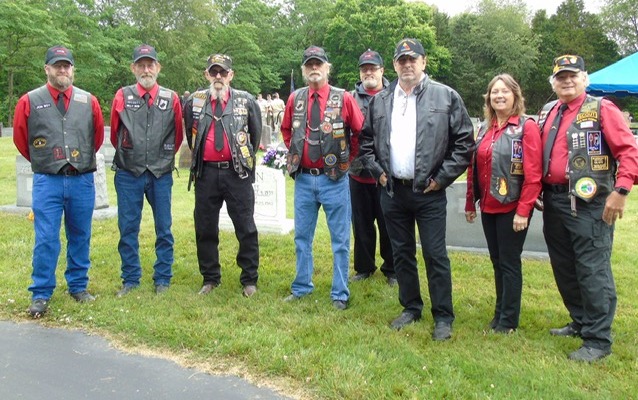 Everyone came together to honor the life and service of Scott Magers. Photo by JR Jessie.