T. Marzetti in Horse Cave recently broke ground on a $133 million project that will add 220 jobs at the local facility. Photo by Mary Beth Sallee.

In what is the largest expansion in the company’s history, T. Marzetti in Horse Cave recently broke ground on a $133 million project that will add 220 jobs at the local facility.

The ground breaking ceremony, which took place on May 13, was not only attended by T. Marzetti executives and local officials but also Governor Andy Beshear. 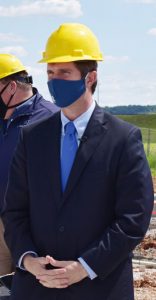 “Even this pandemic couldn’t stop us from being here today,” Beshear said. “I’m happy to help break ground on this exciting project that’s going to expand Kentucky’s economy and continue the Commonwealth’s success stories in recent years, and that’s the growth of T. Marzetti.”

“What an exciting time it is for Hart County, for your company, for all of us,” Beshear continued. “After 15 months of fighting this virus, after 15 months of tragedy and difficulty, we are here today looking forward with optimism and hope.”

In February of 2020, T. Marzetti originally announced the project as a $93 million, 140-job expansion. After the project was delayed due to the pandemic, company leaders announced their plans earlier this year to not only move forward with the project but to also increase its scope.

“This expansion by T. Marzetti highlights the tremendous continued growth of Kentucky’s food and beverage sector, with the creation of hundreds of new job opportunities for residents in Central Kentucky,” Beshear said. “…I know this community is excited to get folks not only back to work but in good jobs that support families…This is a good day in the Commonwealth…There are more good days to come.”

David Nagle, Chief Supply Chain Officer at T. Marzetti, stated that he and the company are proud to be expanding operations in Horse Cave to create additional jobs and to better serve customers.

“This is a super exciting moment for Horse Cave and for T. Marzetti,” Nagle said. “…We are excited to have this opportunity to continue expanding our production capacity and add more good paying jobs here in Horse Cave…At first we were planning an expansion to really be focused on our food service business. What we realized was we had tremendous growth in new products…We realized we wanted to make an even bigger expansion here to support both our retail and our food services because business is booming.”

Nagle added that the choice to expand the company’s operations at the Horse Cave location speaks to the quality of the people and team members.

“What I knew all along was that we have an outstanding team here in Horse Cave,” Nagle said. “…We have a committed group that we’re confident can get this done and help make this a success…Horse Cave will ship products out of here to all 50 states and beyond, and every day when that happens, a small part of Horse Cave will touch restaurants and kitchen tables throughout this great country of ours.”

Tyler Cundiff, President of the Food & Beverage Market for Gray, Inc., said that he is proud to be a native of Hart County and to be a part of this expansion.

“If we could clone T. Marzetti as a customer, we would,” Cundiff said. “The partnership and the trust that’s been developed over these many years as Steve (Blackburn) referenced has been incredible…A lot of the work that we did with Marzetti as our partner really put Gray on a trajectory to be where we are today, and I deeply thank Marzetti for the opportunity and the trust over the years to build that relationship.” 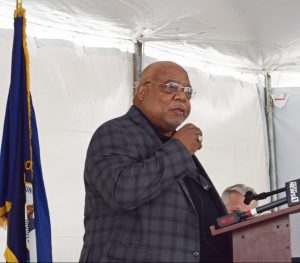 Horse Cave Mayor Randall Curry thanked everyone for their continued support of the community. Photo by Mary Beth Sallee.

Horse Cave Mayor Randall Curry extended his thanks to everyone in attendance, including Glenn Thomas and former Hart County Judge/Executive Terri Martin, for support of both T. Marzetti and the community of Horse Cave.

“This truly is a special day for me having grown up in Horse Cave all of my life,” Curry said. “If you’ve ever read the book or saw the movie Field of Dreams…for almost 72 years now I looked across here and I saw an agricultural field. It transitioned from agriculture to an industrial site…I’m so excited today to be here to speak on behalf of the Horse Cave City Council and the people of Horse Cave for the investment that T. Marzetti and their sister company has put into our community.”

“This is a great relationship (between Hart County and T. Marzetti), and it’s a true blessing,” Bunnell said. “It’s not only a blessing for Hart County, but this is regional. Many counties are involved. It goes far beyond Hart County. Again, we’re truly appreciative for Lancaster Colony, T. Marzetti, and Sister Schubert.”

To encourage the investment and job growth in the community, in February of 2020 the Kentucky Economic Development Finance Authority (KEDFA) preliminarily approved a 10-year incentive agreement with T. Marzetti under the Kentucky Business Investment (KBI) program. The performance-based agreement can provide up to $2.75 million in tax incentives based on the company’s originally announced investment of $92.8 million and annual targets of:

Marzetti Company is a wholly-owned subsidiary of Lancaster Colony Corporation headquartered in Columbus, Ohio and is a manufacturer and marketer of specialty food products for the retail and food service markets. Sister Schubert’s Homemade Rolls are also produced locally at T. Marzetti’s Horse Cave facilities and is located adjacent to its Marzetti’s operation.

Marzetti’s current expansion is expected to be completed by July of 2022. 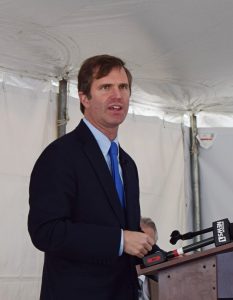 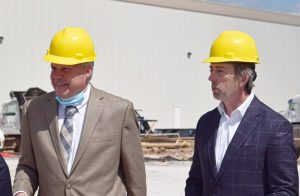 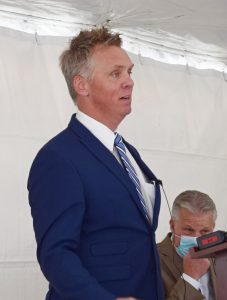 Hart County native Tyler Cundiff, President of the Food & Beverage Market for Gray, Inc., said he is proud to be a part of the T. Marzetti expansion project. Photo by Mary Beth Sallee.