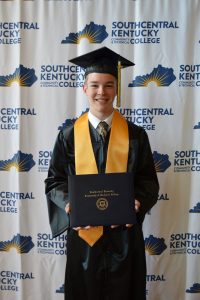 Luke Carter has been taking dual credit courses toward his Associate’s Degree since his freshman year in high school. Photo submitted.

In 7th grade, Luke Carter told his parents he had a goal. He wanted to earn his Associate’s Degree simultaneously with his high school degree.

Luke’s two older brothers, Noah and Jonah, had each graduated high school with 30 and 46 dual (college) credit hours, so he set out to accomplish something no other Hart County student had done.

“Luke started taking dual credit his 9th grade year in class at Hart County High School,” said Luke’s mother, Sonya. “By the end of 9th grade, he had 9 hours. He took 12 hours his sophomore year. His junior year, he took 20 hours. His senior year he has earned 25 hours, totaling 66 hours.”

Luke’s courses came from a combination of three colleges: SKYCTC, WKU, and Campbellsville. Some courses were taken on-campus at HCHS, others were completed through online work, and some were on-campus courses in Glasgow.

“We thought it was attainable because Luke has always been dedicated to his studies,” his father, Greg, added. “He has always worked hard.”

As Luke decided to take a class on campus at SKYCTC Glasgow, his friend Hugo Arce was interested in the same course of action, which is where his story begins.

When Hugo was in middle school at Memorial Elementary, he already understood that dual credit classes would not only assist him with college credit hours, but would save money and fast track the college course requirements.

“The only game plan in mind was to simply take as many classes as I could through the various colleges,” Hugo said. “The decision to also pursue a college degree, on top of my high school degree, came around the start of my junior year of high school.”

“Looking at my transcript and also looking at my options going into my junior and senior years, I saw that it was really possible to obtain my Associates Degree in Science,” he added. “In the end, I was easily able to go past that mark and obtain my degree.”

Both students have already shown great discipline and effort in their academics and athletics.

Hugo dedicated studies to not only dual credit courses, but also advanced placement courses. He recently received a scholarship to play soccer at Berea College.

The accomplishments of both Luke and Hugo are a great source of pride for the Hart County School System.

“These two young men started out as freshmen knowing what they wanted,” said Christie Wilcoxson, HCHS Guidance Counselor. “They began taking dual credit classes as freshmen. Hugo and Luke have worked extremely hard to earn this degree. They both were extremely involved in extracurricular activities, which makes earning the degree even more impressive. I am very excited to see what the future holds for these young men.”

“We admire the commitment to their futures both Luke and Hugo have demonstrated in obtaining their Associate’s Degree while completing high school,” said Assistant Superintendent Debbie Fowler. “The many dual credit and dual enrollment courses we offer allow students this opportunity.”

Both students have deep gratitude for their families and the Hart County School System for the encouragement and support along their educational journeys.

“My parents, Angel Arce and Yanet Santamaria, have always pushed me to be the best version of myself,” Hugo said. “That included taking on a rigorous course load, which they knew I could easily handle.”

“I can’t thank my parents, my family, and the Hart County High School guidance office enough for the support they’ve shown me in obtaining this goal,” Luke said. “…All my general education will be covered when I attend college this fall.”

Luke plans to attend the University of Kentucky to pursue a major in biology in a pre-dentistry or pre-physician’s assistant track.

Hugo will attend Berea College and plans to major in Biology, while having a concentration on Pre-Medicine. Hugo’s dream is to attend either the University of Kentucky’s College of Medicine or Vanderbilt School of Medicine. He eventually wants to come back and once again call Hart County home. Recognizing the need for rural doctors in the state, Hugo is honored at the prospect of one day being able to offer his services to Hart County citizens.

“I am excited to see where life takes me in these next crucial years of my life,” said Hugo. “I want to say in 10 years that I am where I wanted to be all along.” 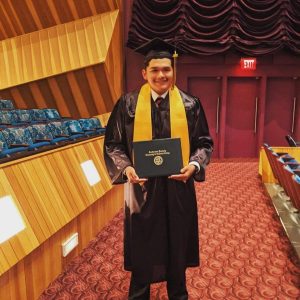 At Berea College, Hugo plans to obtain a Bachelors in Science and then move on to medical school. Photo submitted.