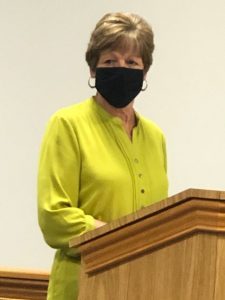 Rossie Kingrey on behalf of the ethics committee. Photo by PJ Martin 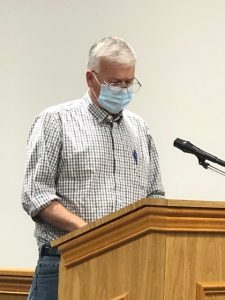 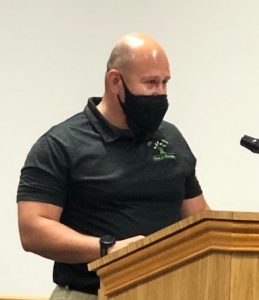 In summary, beginning June 1 residential and small commercial accounts will be billed a fixed customer amount along with a flat per kilowatt hour (kWh) rate. The kWh rate includes using a portion of the TVA 3.1% partnership credit to lower the rate.

All time of use and coincident peak demand changes go away in favor of a flat seasonal rate of approximately $0.10343 per kWh for residential and small commercial customers.

However, if you are a medium or large commercial/industrial customer your accounts do not change. You will see increases/decreases based on your usage.

“This is better than nothing. It’s helping the small user. The person that’s been paying 115 dollars will now not have that heavier charge. It’s something,” stated Mayor Armstrong.

During discussion, it was noted that Community Relief is still taking applications for assistance with utilities (water, gas, electric), and rent for anyone about to be evicted.

Members of the Code of Ethics Committee were present. Rossie Kingrey spoke for the group noting that Glasgow is one of only 23 cities in the state designated as a Certified City of Ethics. Kingrey noted that she had only been asked how to file a complaint twice since her entry to the committee in 2011.

“I think that’s a very outstanding record and you should be proud of that…We can say we are concerned with the ethics and are willing to maintain it,” state Kingrey.

Public Works Superintendent Roger Simmons gave updates on the various work being done concerning, storm water, recycling volumes, trash pick-up, and various repairs. He announced that on July 1st another bus will be added to the transit system.

Glasgow Parks and Recreation Director Eddie Furlong announced along with several other items that the city pool should opening soon. However, the large pool will be limited to 70 people and 8 in the kiddie pool. He also stated that they are hiring lifeguards. If enough are interested in becoming certified, they can bring in an instructor to hold a certification class.

Other departments will present reports at the next meeting.

The council unanimously approved the second reading of the Ordinance to rezone property located at 1398 Happy Valley Road which contains 4,804 acres +/-. The rezoning will change the R-1, a low density residential district to B-3, a highway service business district.

There will be a city-county joint proclamation signing of “Howard Scott Magers Day in Remembrance” on May 19th at 2 p.m. in front of the Barren County Courthouse.

The next meeting is scheduled for Monday, May 24, 2021, at 7 p.m. in-person at City Hall Council Chambers following CDC guidelines.