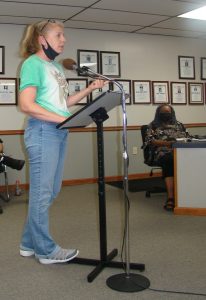 The April meeting of the Cave City Council took an unexpected turn when guest speaker Kerry Mears stepped to the mic. Photo by T Wampler Jobe Publishing News and Sports

The April meeting of the Cave City Council took an unexpected turn when guest speaker Kerry Mears stepped to the mic. The regularly scheduled council meeting took place on April 12 starting at 5 pm at the Council Chambers at City Hall. The meeting was following typical procedures, heading down the usual track with minutes, budget, and reports on the agenda when Mears and her comments and questions derailed the Cave City train.

Mears raised concerns about transparency, communication, speed limits, zoning changes, and procedural issues regarding notification about the times and places of the legal process and hearings of zoning.

Some of the controversial subject matter could be handled by the council while others appeared to be out of their hands.

Mayor Dwayne Hatcher, City Attorney Bobby Richardson, and City Manager Robert Smith, all at different points in the meeting attempted to answer, explain, or comment on Mears questions and concerns. The discussion became intense at times and there was frustration experienced by all parties who joined in the back and forth that often focused on transparency and communication.

Hatcher, Richardson, and Smith explained repeatedly the issues that were either out of their control (zoning hearings and variants) or were against the present laws and statutes that govern the council meetings. Radio stations and newspapers are notified, including the Barren County Progress which is the only legal format in which these hearings must be published in accordance with state law. Clearly, the mayor and city attorney are already going well beyond the minimal requirements.

Council members Leticia Cline and Beverly Ford also joined in with their own questions, concerns, and comments.

Smith said that the 15 mph speed limit sign is not valid because a magistrate just had that sign put up without passing an ordinance. He further stated that the speed limit inside the city would then be 35-miles-per-hour and she would have to take that issue up with the County Fiscal Court.

Smith did say he would have a speed limit sign of 25-mph placed on Northside. “I can’t enforce it, but I can put it up,” he said.

Smith also told Mears that speed limits on 31W were out of the city’s control, “We don’t set them. We don’t touch them.”

“If we want businesses to come when trucks are flying through that area (in front of Dairy Queen),” Mears said. “No one is going to put a business there. There is a 5-point intersection and it is dangerous to turn left.”

Mears was also concerned with code enforcement on properties within the city and Smith told her there were several open cases on clean-up and scrap removal. “It has been the same for four years,” Mears said.

A hard copy of the agenda can be picked up at city hall if requested on Friday before the Monday meeting.

Mears wanted them to be uploaded if possible. “I can get with Jennifer (Freeman-City Clerk) and do that,” Smith said.

Mears then questioned the process of appearing before council. Currently, a citizen must ask the mayor if he or she wants to address the council and provide a topic. Then, the mayor approves the request, which the mayor called just a “formality.”

“Nobody that I have ever known has asked to speak and been denied,” Richardson said. 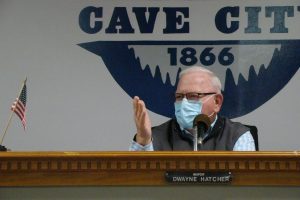 “The mayor does approve whatever goes on the agenda every month,” Hatcher said.

“So technically you could turn someone down and I would have no recourse,” said Mears. “We do have one particular topic (zoning) that you (Hatcher) know about. “That I have no recourse. I can’t talk about it here.”

“The city has nothing to do with that,” Hatcher said. “Nothing. I will stress that. That is law.”

Richardson said it is state law in the statutes (KRS100).

“There is a committee for it that did not meet,” replied Mears.

“Beverly, I have done that myself,” replied Hatcher. “Now, that’s something we might need to look at…a lot of cities have a procedure (to speak at a council meeting) in writing.” 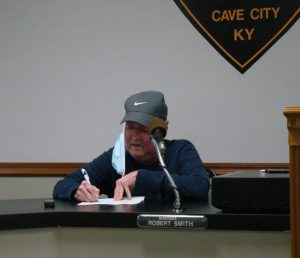 City Manager Robert Smith takes down notes after Kerry Mears asked him if the agenda could be placed on the internet prior to the meeting so citizens could know what the main topics at the council meetings would be. Photo by T Wampler Jobe Publishing News and Sports

“It is just informational, letting people know,” added Ford. “When I was called about this zoning. I had no idea. I had never heard of it. And I am on community development, the chair.”

“We don’t know about it either,” responded Richardson.

“Cave City has a website and the same information we are posting (as is required by law),” Ford said. “We could post it there. What is that going to hurt?”

“It is not going to hurt but we don’t know it,” Richardson answered.

Ford said that they know what is being published right now with the “reading.”

“They got to have a second reading of their minutes,” Smith said.

“There is a process going on…and that process effects Cave City,” Ford said.

“Actually, the process is over and done,” Hatcher said. “It is not official like our actions. What we do tonight will not be official until we approve these minutes next month. They meet next Monday, the 19th, to approve their minutes…then all of that will be official.”

Ford, Cline, and Mears were trying to make a point that, when and if, the council know any information pertaining to zoning, that the council should then make that information known to the public.

“Somebody will have to be charged with finding it,” Richardson said.

Hatcher said he found out about the zoning change request when he saw it in the newspaper and there was never a meeting as mayor that he was part of prior to that.

The notification must be put in the newspaper 14 days prior to the meeting date.

“My only problem is if we only do the minimum that is required by law,” Cline said. “Then we will only be the minimal as a city. I feel like even though it is not required by law to notify people, we will grow and do better if we let everyone know what is happening within our community.”

Cline said she is very involved with social media and radio but, “I refuse to read Jeff Jobe’s newspaper (the Barren County Progress), I am sorry. I would like to be notified as a council member.”

“I would love to know about the meetings. Especially, if we are going to have to vote on them,” Cline added.

Richardson said it must be posted by state law in the newspaper with the largest circulation in the county and a sign must be posted on the property plus every adjacent landowner gets a letter from the city-county planning commission.

“My question is if there is a zoning change in the city, is the council not told?” asked Mears.

After her question and a few other comments were made about communication by the mayor and council members, Mears shrugged and made a facial expression.

“Now we can discuss, or if you want to keep making fun of—then this discussion is over,” Hatcher said sharply. “It’s that simple.”

“All I wanted is a straight answer,” Mears said.

“I’m giving you the law,” Hatcher said. “It is the straight answer.”

Hatcher said the zoning change would come to the council at the appropriate time.

“The council has to approve a zone,” Smith said.

Hatcher said there is a joint city-county meeting. “No, they don’t inform me. Like I say, I saw the sign in front of the property,” Hatcher said. “And I saw it in the paper.”

“Once I saw it, I’ll take the blame or whatever for not letting you all know,” said Hatcher. “From that point on (reading the notification in the news outlets), it’s on me.” He added that he was not disagreeing with the point Ford and Cline made.

“You have to understand that this is a quasi-independent body (joint city-county planning commission) that we do not have any control over,” Richardson clarified. “…they have a statutory formula they must follow.”

Richardson explained that the process of a change to zoning begins when a citizen pays a substantial fee to the City-County Planning Commission. Then the director prepares a staff report followed by the public notices being posted that are required by statute. A public hearing is held following that process with sworn testimony on the three grounds (the comprehensive plan, character of neighborhood has changed, and or original zoning was done in error) for which the change is being requested.

“The council is really the last recourse to get it (zoning changes) stopped or get it passed,” said Councilman Steve Pedigo. “We don’t do this every day.”

“When it does come to us, we are very restricted,” the Mayor said quoting Richardson. “It is much like a court of law, a court proceeding like Bobby said.”

Near the end of the discussion, Hatcher said, “We will definitely look at these concerns. By law, there may be a few…we can definitely improve on. I’ll be the first to admit that. But there is some of them that we can’t do anything with…”