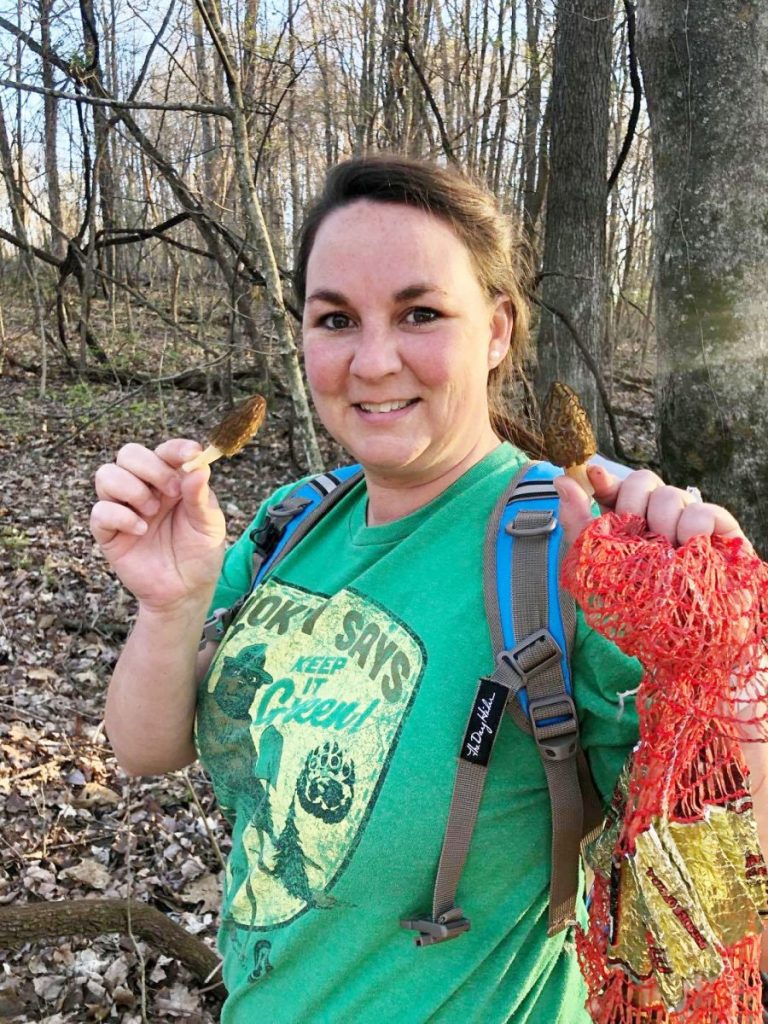 In eastern Kentucky, the common name is hickory chickens. In other parts of the Commonwealth, they’re referred to as merkels or miracles based on folklore of how they saved a mountain family from starvation.

Whatever you call them, one thing’s for sure: the morel mushroom is a tasty, down home delicacy for many in Barren and Metcalfe Counties.

A current resident of Glasgow, Ashley has been hunting morel mushrooms for 33 years.

“We lived in Summer Shade (Metcalfe County) when I hunted my very first time, and I knew then I loved it,” Ashley said. “It was a family thing. My mom’s grandparents were avid mushroom hunters in Indiana, and it was passed down.  My dad took an interest in it and began taking me with him when I was about 7.  I can hear him now (say), “Watch where you’re stepping. Don’t step on them.’”

According to the Kentucky Department of Fish and Wildlife, morel mushrooms are the most well-known wild fungus around. Having a conical-shaped cap that is covered with ridges, they typically arrive when the spring season arrives and the nightly temperatures stay in the 50 degrees range. 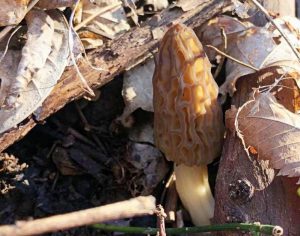 Morel mushrooms grow in the soil, not on wood. However, they typically can be found associated with the roots of sycamore, elm, ash, poplar, and hickory.  Wherever one morel is found, there are usually many others.

“When the weather begins to warm, early spring I get an itching to go,” Ashley said. “When the red buds are in bloom is my clue to hit the woods. I find them around apple, elm, ash, and oak trees. Those are my go-to trees. I find most of mine in a very moist soil not standing with water, but it is a low area.”

“I do check the soil temperature in a shaded area at home before I head to the woods,” Ashley continued. “Usually an average of 55-60 degree soil temp is when I find them. You want to go when the night temps stay in the 40s. Usually hunting in the afternoons is when I find mine. I have went in early morning, but I choose afternoons.”

As far as the number of mushrooms she collects, Ashley said she typically gathers all that she can find. 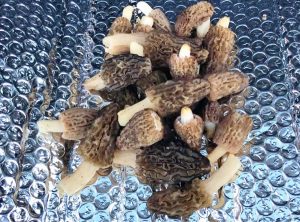 These morel mushrooms are just a few that Ashley Livingston has collected. Photo submitted.

After morels are collected, there are varying opinions on how to purify, store, and cook the mushrooms. Research is strongly suggested.

“If you are storing the mushrooms short term, do not wash with water,” said Janey Cline, a University of Kentucky Cooperative Extension Family and Consumer Sciences Agent. “Simply wipe with a damp cloth, and store in a paper bag in the refrigerator for up to 10 days. If you prefer long term storage, they can be frozen or dried in a food dehydrator. Your local extension office can provide information on the drying and freezing processes.”

To avoid the possible ingestion of insects, slugs, and other small creatures, some sources suggest cutting mushrooms in half and checking them thoroughly. Others suggest cutting morel mushrooms lengthwise and soaking them in hot saltwater to get insects out of the pores and hollow stems.

“I cut my mushrooms in half length ways, place in bowl with bottled spring water. I heard chlorine in tap water was not good for them,” Ashley explained. “(Add) a little dash of salt to kill any insects that burrow in the mushroom. Refrigerate 1 to 2 days until ready to cook. If not going to cook soon, rinse them well, and lay them out on cardboard or newspaper to dry. Once dry, put them in a mason jar in a cool, dry place to keep until ready to eat. Once ready to eat, just dump some in a bowl to rehydryate and cook to your liking.”

The name dry land fish comes from the practice of slicing the morel mushrooms in half lengthwise and then breading and frying them like one would fish.

“I roll mine in flour and pan fry in butter, dash of salt, and they are delicious,” Ashley said. “You can’t eat just one.”

Janey also has a specific process when it comes to preparing and cooking morels.

“Wash morels gently and lay on paper towels to absorb extra moisture,” Janey said of her process. “Cut off the bottom of the morel’s stem just above the picking level. Roll in egg wash and then in cornmeal and fry in hot oil until browned. Salt and pepper to taste. Unless they are very large or have a bug hole, I usually fry them whole. If they happen to be, just slice in half lengthways or cut away the bad spot. Be sure to rinse away anything inside. Unfortunately, they are hard to locate and the wildlife like them, too, so we usually only have one or two batches a year.”

“Mushrooms pair very well with onions, meat, and pasta,” Janey added. “At only 15 calories, 2 grams of protein, 1 gram of sugar, and 0 grams of fat per cup, they are a perfect option to bulk up your favorite soup recipes or top off your favorite pizza…Flavor is added when they are sautéed, grilled, microwaved, or roasted.” 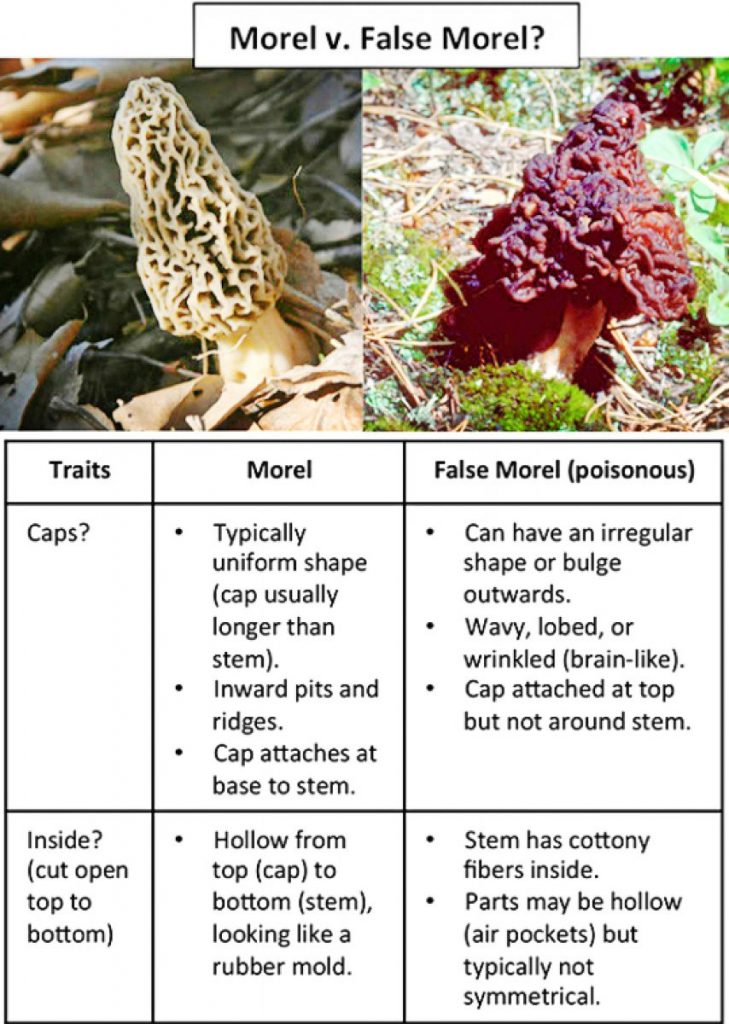 This diagram details the difference between true morel mushrooms and false or poisonous morels. Photo courtesy of the University of Kentucky College of Agriculture Plant Pathology Extension.

According to the University of Kentucky’s College of Agriculture, Food, and Environment fact sheet about wild mushrooms, there are seven important steps to follow when hunting these fungi.

When dry land fishing, it is important to remember to only collect mushrooms where you have been permitted to do so. Also, if a potentially dangerous mushroom has been eaten, seek medical attention immediately.

Ashley also has tips of her own to share with others who are ready to take to the woods.

“Find you a good woods and just start looking down,” Ashley said. “If you know your trees, find an elm, oak, ash, or tulip poplar tree and start looking. North-facing hill sides are also a good place.”

“Remember, practice makes perfect,” Ashley added. “Never give up. You can go into a woods and find them right off. It takes time. Always use a mesh bag with holes to hunt, example a potato sack or onion bag, that way the spores will fall from the bag as you walk and more will grow there. Cut or pinch the mushroom from the ground, leaving the root in the ground. Have fun.”

While there is no doubt that harvesting morel mushrooms provides a tasty treat, Ashley’s favorite part of dry land fishing doesn’t lie in the kitchen but rather in the time spent in the great outdoors with her family.

“I just love the outdoors, so being outside and in the woods is calming to me, being close to nature,” Ashley said. “Finding dry land fish is like getting a BINGO. It’s so exciting finding that first one. I stop and just stare. When you find one, there is always more within the three-foot circle as I say.”

“My mom has always went with me,” Ashley continued. “She has an eye for them for sure as she, too, was raised hunting them in Indiana with her parents and grandparents. I take my husband and son with me often. My son isn’t so interested in it, and my husband says he can’t see them but is there for ‘morel’ support.” 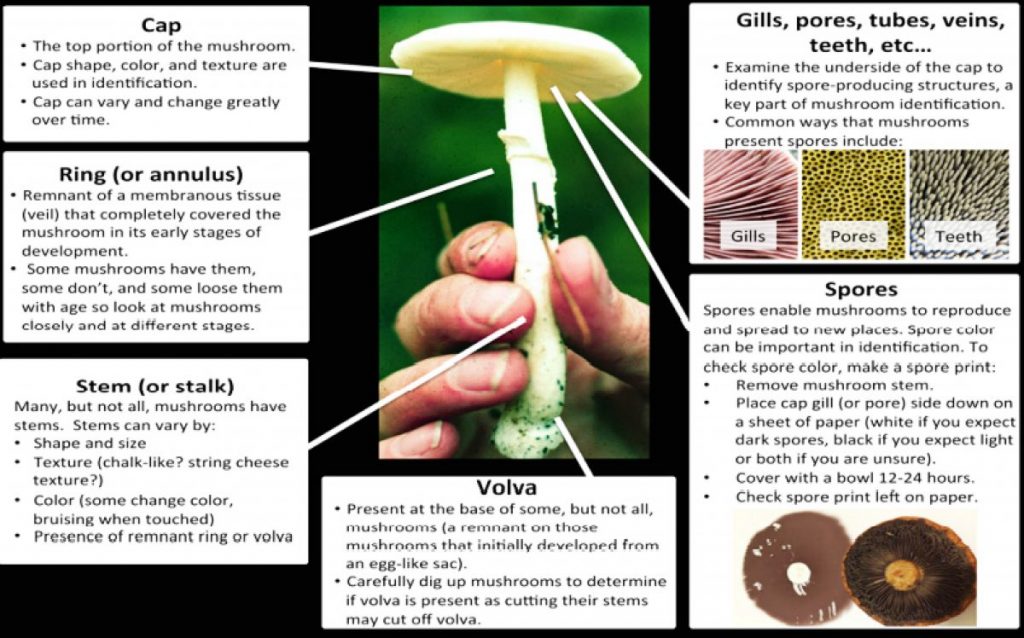 Knowing the parts of a mushroom and their characteristics are crucial in proper identification. Photo courtesy of the University of Kentucky College of Agriculture Plant Pathology Extension. 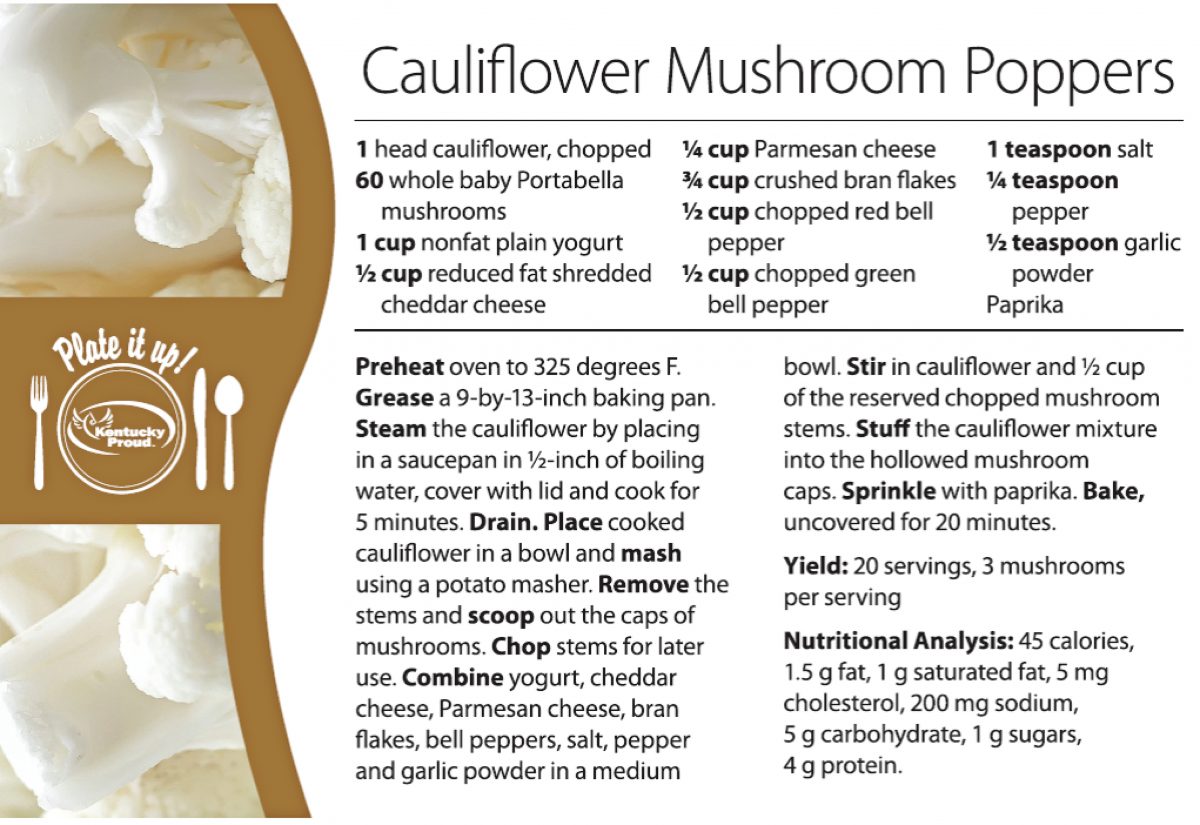 According to UK Cooperative Extension Agent Janey Cline, morel mushrooms would be a great substitute for the portabella mushrooms in each of these recipes. Recipes courtesy of Plate It Up! Kentucky Proud. 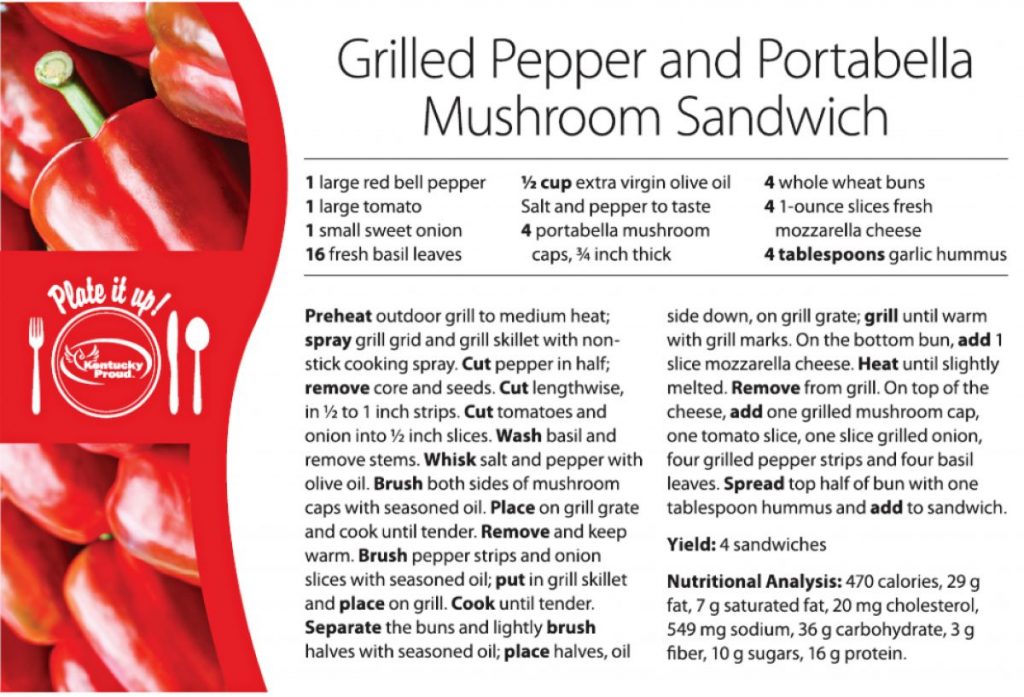