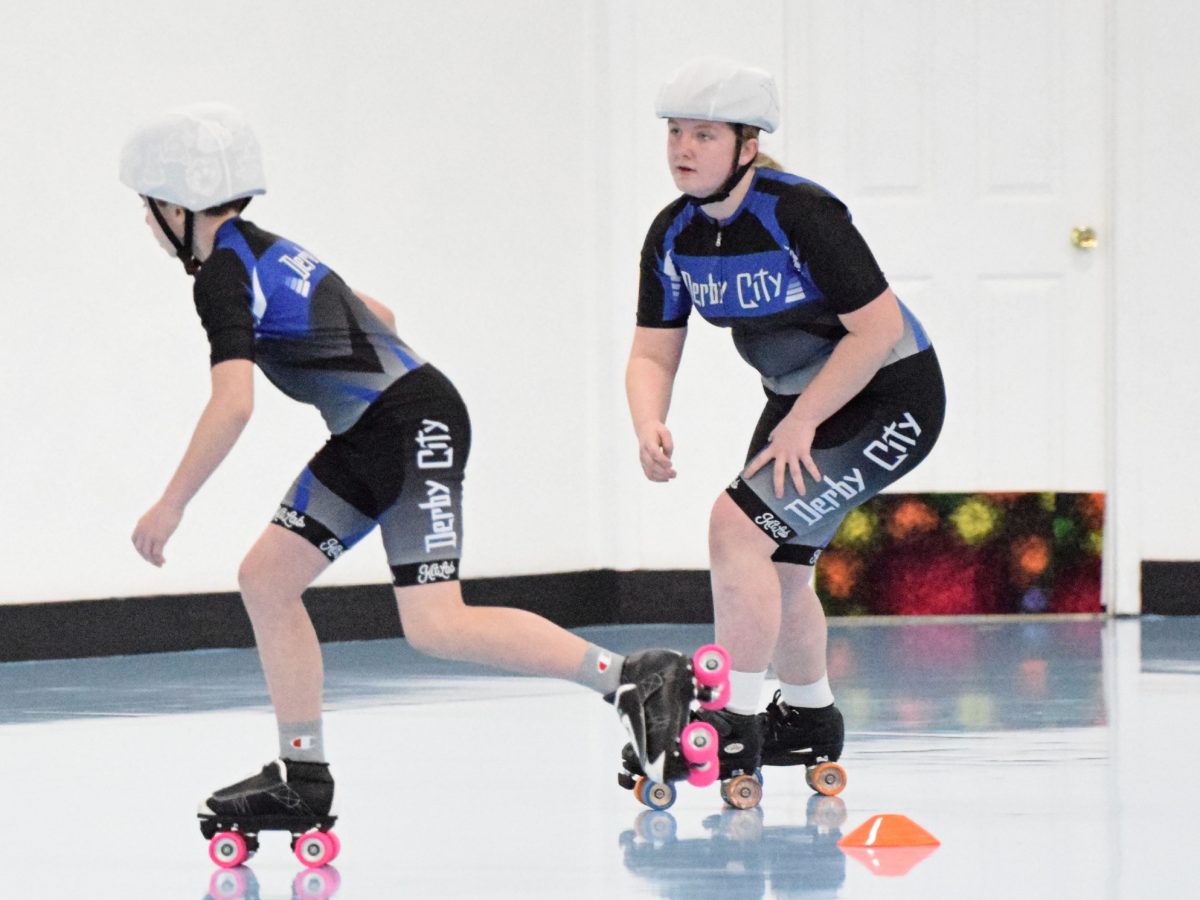 Natalie Jones, right, participates in the sport of speed skating and is a member of the Derby City Speed team. She is the daughter of Marsha Bryant Stillwell, a Hart County native. Photo submitted.

Speed skating may not be a sport often highlighted, especially locally, but it certainly isn’t for the faint of heart.

Speed skating consists of a group of individuals that race each other on a 100-meter flat indoor track or a 200-meter or larger outdoor track. They wear either in-line or quad speed skates that are designed for fast-paced skating. Speed skaters are split into different age divisions and compete in individual distances and relay team distances.

Although speed skating is an exciting way to stay active, it isn’t always fun and games.

Natalie Jones, a sixth grader at Eastside Middle School in Mt. Washington, Ky., has been a member of the Derby City Speed speed skating team since January 2020.

“It can be extremely dangerous,” Natalie said of speed skating. “Personally, I’ve only fallen and ended up with scrapes and bruises. If the floor conditions are not perfect, then the wheels (of the skates) don’t grip very well. Also, a skater has to be a quick thinker because if their wheels slip, hit something, or just loose balance, a fall can be very serious. Just in the time frame I have been skating I have witnessed two of my own teammates break their ankles during practice and then another get pushed during a race and broke her shoulder. At the meets, we have witnessed other teams have members to have serious falls with lots of road rash and what looks like serious injuries. For this sport, a helmet is required. Knee pads, elbow pads, and fingerless riding gloves can be worn, but most members do not.”

Although injuries can occur while racing, speed skating is not to be confused with roller derby.

Roller derby is a competition between two teams who try to score points by passing the other teams’ players while defenders attempt to stop the designated player from scoring. In roller derby, physical force with other skaters is allowed.

However, speed skating is a non-contact sport with individual races and team relays and is supported by many countries around the world with a world championship held each year. In speed skating, no one is allowed to push, shove, or touch another skater.

“I have always loved to skate in general, and when we learned of a local speed skating team, we decided to check it out,” Natalie said. “…At our first practice, everyone welcomed us with such excitement, and it was like an instant family…This is the first actual sport I’ve been involved in, and it was a perfect match.”

Speed skating differs from other sports in the fact that there are no certain positions on the team. With this sport, t 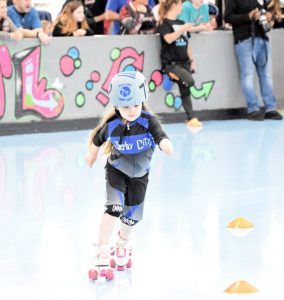 eam members are ranked more on how fast they skate and are grouped with fellow teammates around the same qualifying speed.

The Derby City Speed team that Natalie and Emily are members of is coached by Wayne Bowles, Sherri Bowles, and Chris Anspach.

“Speed skaters race in a pack similar to NASCAR racing and get points for finishing first, second, or third in the final of each distance they compete in,” Coach Wayne said. “…Speed skating is a sport for all ages. We have skaters ranging in age 4 to 66. I’ve even coached a skater in his 70s. This is a good sport for the whole family. I’ve had whole families on my team, and sometimes the friendships last a life time. I have a friend from my speed skating day when I was 14, and now I’m 56.”

Marsha Bryant Stillwell, Natalie and Emily’s mom, explained that each skater is placed with fellow skaters that are able to skate at similar speeds.

“Therefore, any age is able to participate and will be competing against those in alike age groups,” said Marsha, a native of Hart County. “…There are different age and gender divisions. There is in-line (roller blade style) and quads (roller skate style). There is also relay division, which is a two-person team that works together to complete a certain amount of laps by tagging each other.”

The speed skating season is typically year-round. Indoor competitions run from October through June or July. Outdoor races are held anytime during the year hen the weather cooperates. Speed skating has allowed Natalie and her fellow Derby City Speed teammates to compete at various places, including Champs in Lexington, Ky., Anderson Roll Arena in Anderson, Ind., and Skate World in Evansville, Ind. 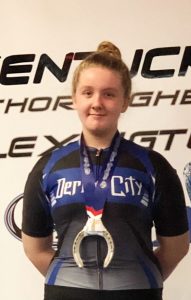 Speed skating requires many hours of practice and training.

“Most teams practice three to five days a week for two hours each practice, but training never ends,” Marsha said. “Skaters are encouraged to train on their own or with other skaters outside of the formal in-rink practices. Weight training and plyometric training is also recommended.”

“The typical indoor speed meet is two days of racing, starting with the rink doors opening at 5 a.m., warm-ups beginning at 5:30 a.m., and races starting at 6 a.m.,” Coach Wayne said. “The day usually ends around 6 p.m.”

“Quad skaters go first by age and then relay teams,” Marsha added. “Then, depending on the amount of quad racers, the in-line skates go next. Sometimes quads and in-lines have their own days due to limited time in the day. At the end of the day, awards are given out. A general race day lasts about 9 to 12 hours.”

Although the days of practice and competing can be long, speed skating has been worthwhile for both Natalie and Emily. Marsha said that the sport has greatly helped Emily come out of her shell. 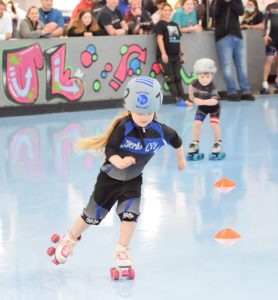 “Winning, going skating, and seeing my friends,” Emily said is what she likes about speed skating.

“For Emily to have actually competed in this last meet was a huge ordeal,” Marsha said. “She’s a very shy person, and as a mother I was nervous about how she would actually do being across the rink by herself, not knowing anyone. She was a real trooper, though, because she went out there and did a fantastic job. The entire team cheered her on and I almost cried tears of joy both times that she raced because she had overcome so many fears. After Natalie’s last meet, she (Emily) kept telling me that she wanted to compete, too. I thankfully had already ordered her a uniform, so I then started prepping her for the big day so she wouldn’t be completely blindsided. She now looks forward to her next meet in May.”

Although Marsha was at first hesitant to allow Natalie and then Emily to join the Derby City Speed team, she is now glad to see both of her daughters be a part of a sport they enjoy.

“In the beginning, we had no idea what to expect, but Natalie wanted to try it out since she was never able to participate in any other sport before,” Marsha said. “Plus, I wanted to see the difference in speed skating and roller derby because I wouldn’t have been comfortable if it was a more contact sport. We were blown away with the level of some of the members as well as how costly it can end up being. Some skaters have invested over $1,000 in one pair of skates alone, but as a mom watching them constantly improving, I would never take them away from something that they enjoy participating in.” 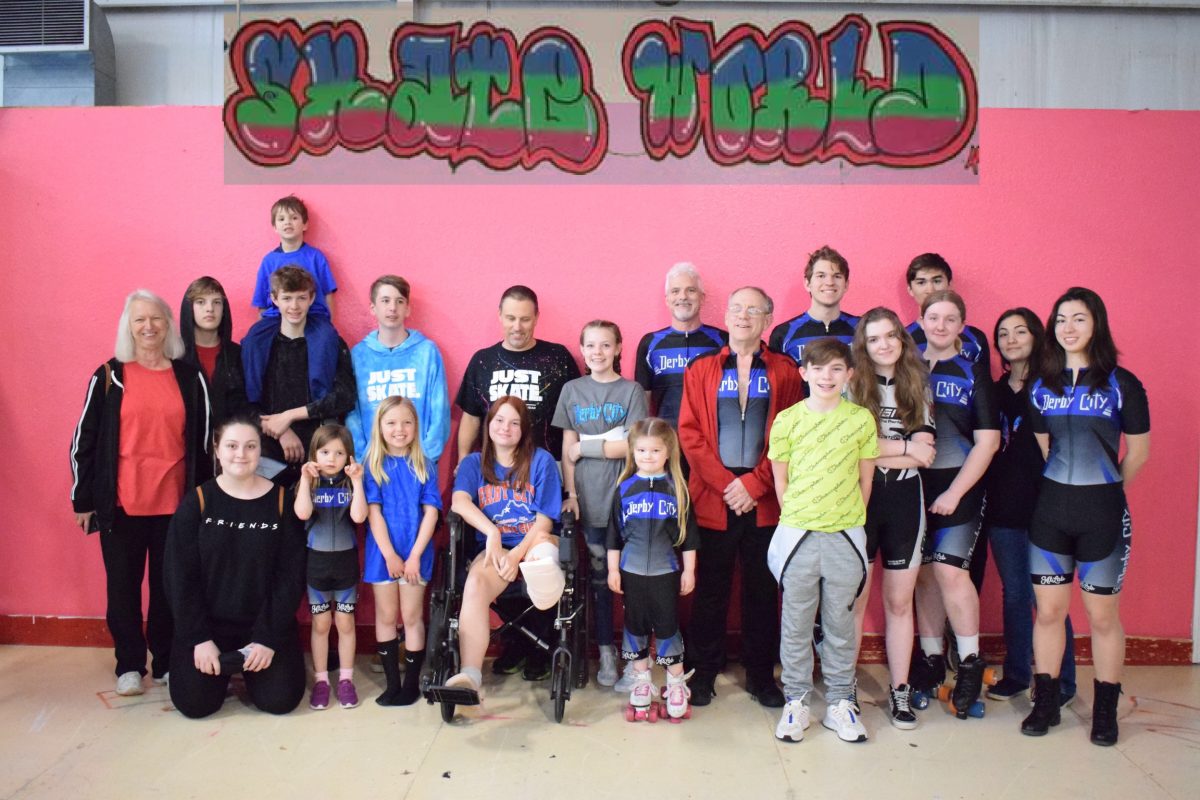