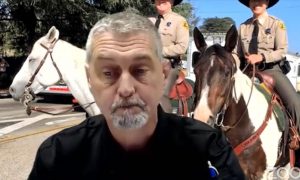 In a special called meeting of Barren County fiscal court on March 24, Sheriff Kent Keen addressed the court regarding the immediate need for new vehicles.

“The sheriff’s office has ran into some bad luck with vehicles,” said Judge/Executive Hale.

Keen explained that a 2013 Ford Taurus with 191,000 miles locked up due to rear-end transmission problems, and that the estimated cost of repairs for $3,500-$5,000 exceeded the value of the vehicle.

Also, a Dodge Durango struck a deer on the left driver’s side. The impact activated all of the airbags, and cost at least $5,000 worth of body damage, as well as an additional $4,000-$5,000 in interior damage.

“It is possible that they total the vehicle, we don’t know yet. What we do know is it’s going to be down at least a month,” Keen said. He also addressed the fact that even if the vehicle is repaired, it would no longer be viable for Frontline activities, because of safety issues due to the employment of the airbags.

Keen recommended that the court allow him to purchase used vehicles from Texas. “We’ve had good luck in the past with used vehicles. It’s the same department in Texas where we got others,” he said.

He said that there were three available, at $17,900 each. He said that if the court were to allow them to purchase all three, the price was lowered to $17,600 for each vehicle.

The used vehicles have approximately 70k miles each and are partially equipped. Keen added that they could be delivered to Kentucky for no additional cost.

Judge/Executive Hale made the recommendation to the court that they go ahead and approve the purchase orders and payments for all three vehicles.

“We are coming into the busy season, as far as sheriff’s office activities go. The sheriff’s office is helping with social service cases, evictions are starting up again, and investigations are through the roof. They have also graciously been helping us with code enforcement,” Hale said.

Squire Tim Coomer asked about the cost of outfitting the new cars.

Keen explained that some of the old cars that are being surplused for sale later in the year have equipment that can be transferred to the new vehicles, including blue lights and light bars.

“We have more employees than we do vehicles at this point, and it’s hard to respond to all of the calls for service,” Keen said.

The court agreed unanimously to move forward with the purchase of the three used vehicles.