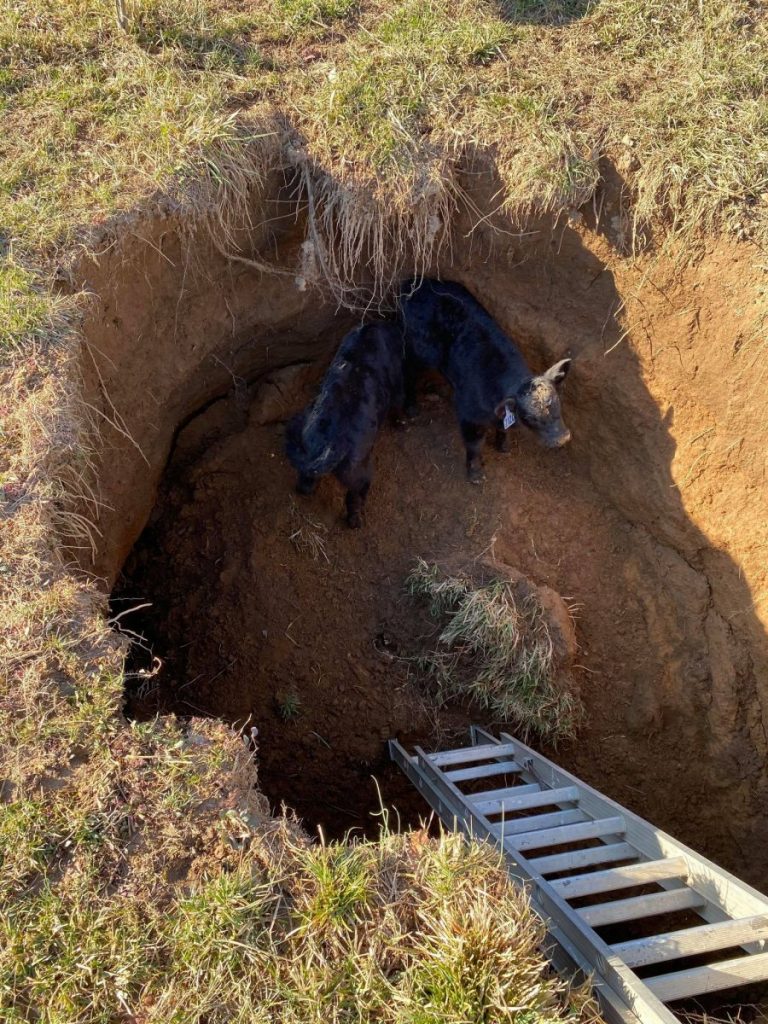 After excessive rainfalls at the beginning of March, sinkholes like this one on the Puckett farm in Linwood have started to collapse in on land across Hart County. Photo submitted.

In a three-day rainfall accumulation ending on March 1, south central Kentucky found itself reaching high levels of rainfall throughout many counties.

According to the National Weather Service, in Hart County alone, nearly six inches of rain fell during that time.

Torrential rainfall not only brought flooding to many areas in the county, but also caused sinkholes to form on several local farms.

One of those farms included the Ray farm in Hammonsville.

According to DeJuana Lindsey, two sinkholes are now formed on that land. The hole that a calf had fallen in was a pre-existing sinkhole that had been on the farm for years. However, because of the rainfall from weeks ago, that particular hole has gotten deeper. It is now approximately 4-foot wide by 8-foot deep.

The excessive rainfall also caused a new sinkhole to form, measuring at approximately 8-foot by 8-foot.

“The new sinkhole is very close to the older hole,” Lindsey said. “I do think in time they will meet. There are caves all over the area, so you never know where one might turn up. I am very concerned for our cattle, and with the sinkholes being very close to the pond, I would hate to see the pond drain. We have fenced off the area for now and plan on filling with rock.” 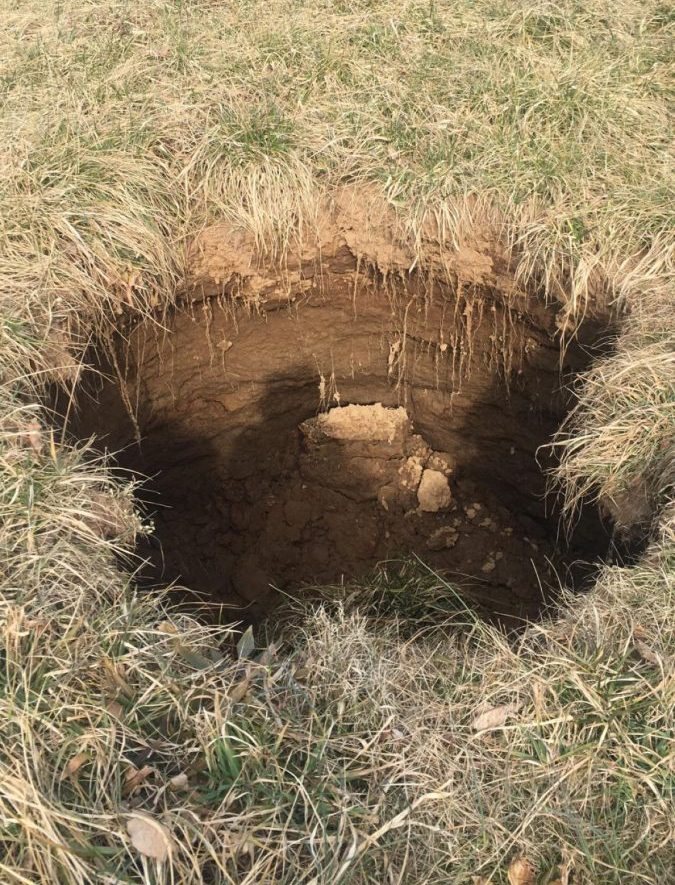 A sinkhole that has formed on the property of Lance and Shelly Strother. Photo submitted.

Other sinkholes have also opened up on the property of Lance and Shelly Strother, Faye Edwards, and the Puckett farm in Linwood.

Chelsea Ballard is the Membership and Volunteer Coordinator at the American Cave Conservation Association (ACCA). She is also a student at Western Kentucky University (WKU) studying karst geoscience and hydrogeology. Sinkholes are one of the many features that she studies and assesses in areas with limestone.

“According to Kentucky Geologic Survey, around 40% of Kentucky is covered in sinkholes,” Ballard said. “For anyone in south central Kentucky, you can guarantee to find a sinkhole within a five-minute drive or sometimes just looking out your back door. This is all possible due to a karst landscape that is made up of soluble bedrock, such as limestone, and it erodes from rainwater. Other commonly known features related to this landscape are caves, springs, underground rivers, sinkholes, and disappearing streams.”

“Generally, sinkholes continue to grow at various rates depending on their location and how much water it drains throughout the years,” Ballard continued. “If it is a sinkhole that drains after each rain, you can expect it to grow faster rather than a sinkhole that may not be as large of a depression.”

Although the sinkholes at the Lindsey, Strother, Edwards, and Puckett properties came after the torrential rains, Ballard stated that during the months from December through April, more sinkholes develop than any other time of the year. She refers to it as “sinkhole season”.

“This is due to varying temperatures, ground freezing and thawing, and our winter/spring rainy season,” Ballard explained. “Generally, the transition from summer to fall is a drought season. When we have several inches of rain drop in a short amount of time, the sinkholes flood because of one or two things.”

Those two things may include:

“In this (second) situation, we had 6+ inches of rain in a short amount of time. The sinkholes became overwhelmed with the amount of water but eventually, the water table came up so high, the water had nowhere to go.”

Ballard further stated that she knew collapsing sinkholes would occur after the heavy rainfalls.

“One thing to keep in mind, this area is full of caves and underground voids,” Ballard said. “The water from the surface drains through the cracks and crevices of the limestone and slowly, over time, dissolves the rock away. As this occurs, the water below and above is always changing the landscape.”

With the development of neighborhoods, roads, and towns, Ballard said water flow plays a major role in causing more sinkholes to collapse in.

“As we alter the water flow, it affects the original path, and the water has to now find a new way down,” Ballard said. “This can weaken the new water paths more quickly because the water did not go that way originally.”

“Water is powerful,” she added. “The best thing is for our community to be educated on sinkholes, caves, and water quality. Once that is accomplished, you can expect the area to improve on sinkholes from collapsing in and where we should or should not develop new neighborhoods, roads, etc.”

However, Ballard said that it is hard to predict when a sinkhole may open up.

“Perfect example would be the Corvette Museum sinkhole collapse in 2014,” Ballard said. “The Skydome was built in the 1990s, unaware of a cave below. Twenty-five years later, a sinkhole opened up, swallowing up eight classic corvettes. Bowling Green has been developed on top of the sinkhole plain, where limestone is exposed. As cities, neighborhoods, roads, etc. develop, they are rerouting the original water flow, and it creates problems and concerns very quickly. The water is now finding a new way to get to the main river source, and it can cause the land to collapse in more quickly rather than it taking its original water flow. Bowling Green is essentially day-by-day waiting for another sinkhole to collapse in. There are constant concerns with sinkholes in that area.”

But despite the unpredictability of sinkholes, farmers can take the proper precautions when something like that does occur.

“If the landowners want to fill in their sinkhole, the best option is to incrementally fill the depression with fill soil that has a high amount of clay and low amount of sand,” Ballard explained. “Continue this process until the depression is filled in. You may want to overfill the hole and create a small dome since it is likely the fill soil will compact and settle over time. Allow the area to sit for a month or two to ensure that a new sinkhole does not form. You may want to lay some topsoil or potting soil on top. Topsoil can help you establish vegetation. Farmers should be on alert throughout the year to make check for new or growing sinkholes. This can cause concerns for livestock or even equipment going off into the sinkholes.”

If you would like more information or if you would like for someone to visit and assess your land about sinkholes, caves, springs, or water quality, please email Chelsea Ballard at chelsea@caveconservation.com. And as always, please do not dump trash into sinkholes as it negatively impacts water quality. 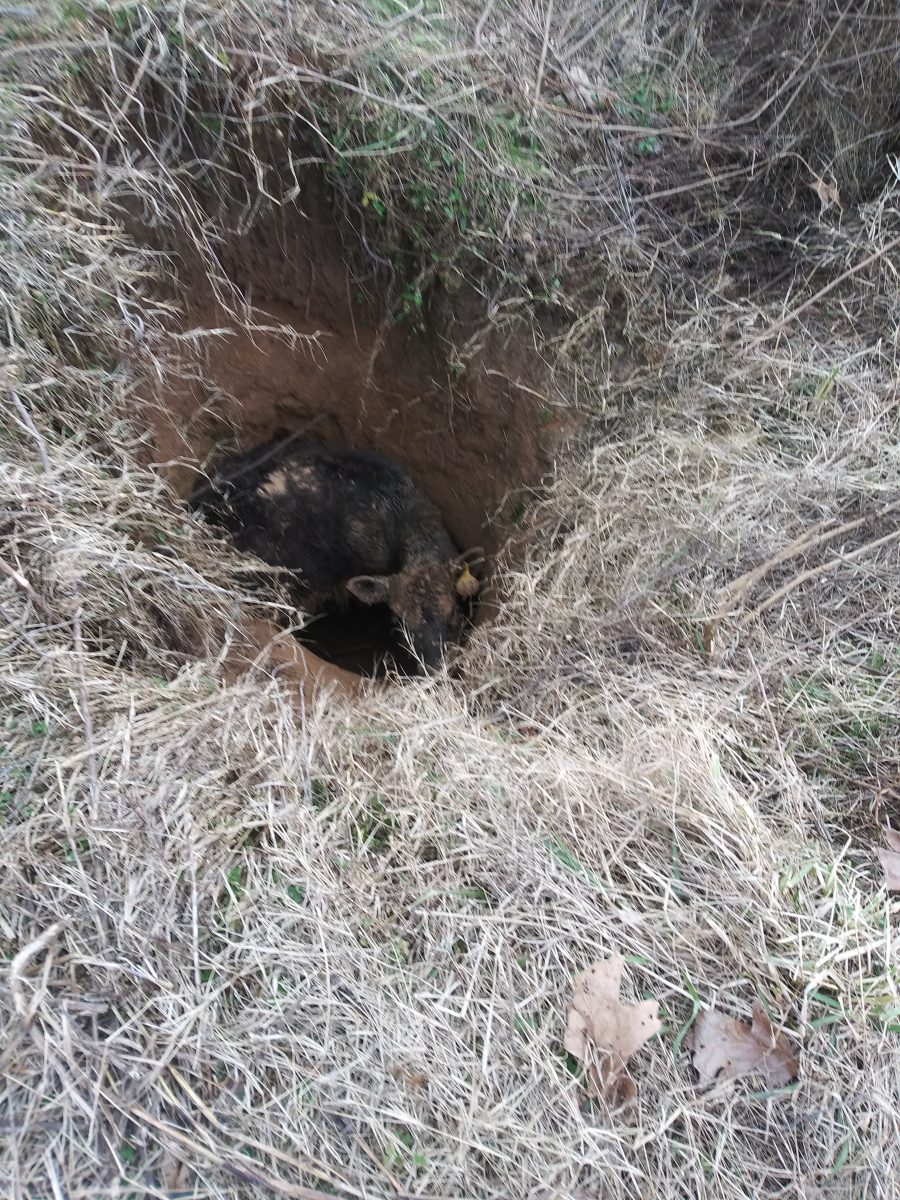 A calf had to be lifted out of a sinkhole after falling in on the Ray farm in Hammonsville. Photo submitted.