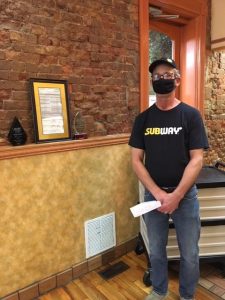 Greg Harris in his downtown Glasgow Subway, which he has owned and operated since 2013. On the wall, Harris has kept all of his health department inspections, which I’ll score 100% for cleanliness and safety. He has also won the downtown business award. Photo by Jennifer Moonsong

Back in 2007 when Glasgow man Greg Harris went to work for the Subway Corporation as a field consultant, he didn’t know where the job might lead.

It was his responsibility to inspect 30 Subways a month, to be sure they were complying with the rules, regulations, and expectations of Subway. In the process, he got his franchise training and in July of 2013, he opened his own Subway on the square in Glasgow.

Since that time, Harris has operated a thriving downtown business.

“It is a family business. All three of my kids work here,” said Harris. In fact, his children- Steely, Henry, and Hadley- have grown up watching their dad pay close attention to the details of his business. Now, he wants to pass that tradition on by expanding.

“I am purchasing the subway in Edmonton, over in Metcalfe County, and one down in Brownsville,” said Harris.

“This way, if one of my children would like to go on with the family business and provide a living and a good life for themselves, they have a way to do it,” he said.

“This is a new opportunity, and I have connections in the communities that I’m going to. First and foremost I like the people, I like getting to know my customers and providing a service,” he said.

Harris describes Subway as the hardest quick service restaurant job in the area because each employee is expected to keep a clean and presentable space, run the register, do the prep work for the sandwiches, assemble the sandwiches, be kind and courteous, and serve a good product. He likes the challenge and is proud to have instilled the same work ethic into his children.

“I wasn’t necessarily pursuing the idea of buying more subways, but when I saw that they came up for sale, I saw the opportunity to expand. I’ve been fortunate enough to do this in my life, it’s something I want to pass on,” he said.

He plans to have both up and running sometime this spring.