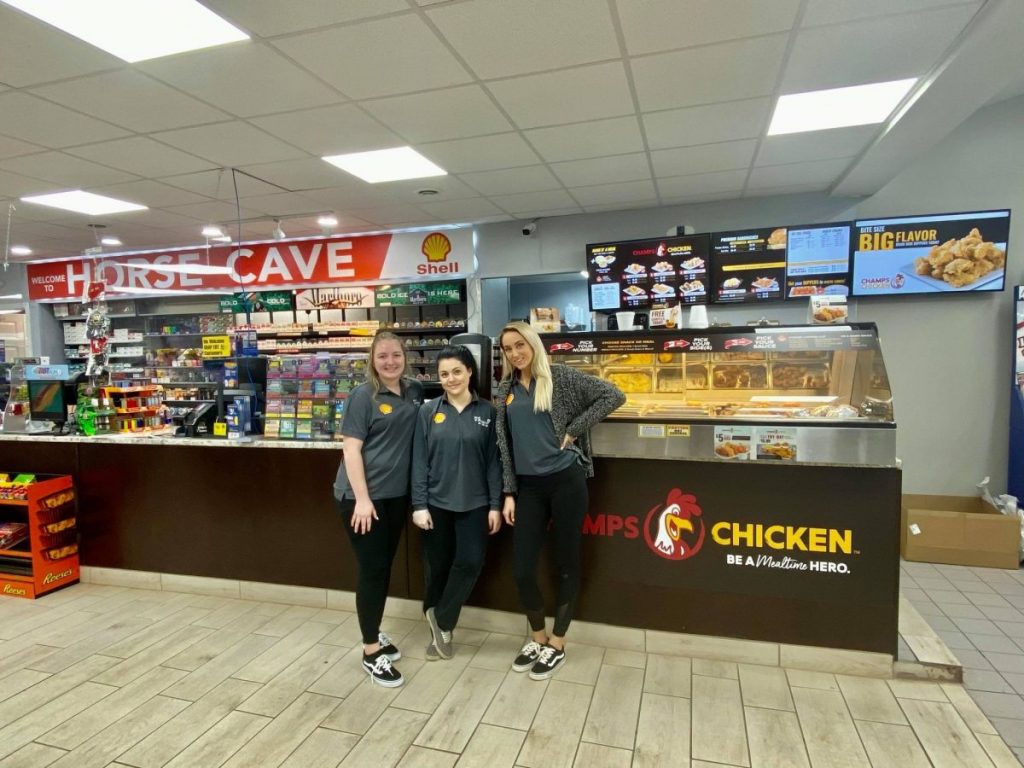 Shell employees, from left, Haley Silvers, Brandy West, and Ashley Vincent, found themselves in an emergency situation when a Louisville woman who had been abducted entered their Horse Cave store and asked for help. Photo submitted.

Note: The “mother” and “daughter” of the story wished to remain anonymous. Because of court proceedings, the name of the “ex-boyfriend” has been kept anonymous as well.

In the evening of March 1, a mother in Louisville was faced with one of the most gut-wrenching moments of her life. She witnessed her daughter being shoved into a car by her abusive ex-boyfriend, forced to unwillingly leave with him.

“I immediately grabbed my keys and tried to chase them, but in our neighborhood you can either go right or left, and I didn’t know which way they had went,” the mother said. “Obviously, they went right because that headed toward the expressway. I never would have dreamed in a million years that he would’ve hit the expressway.”

The daughter, who is 21-years-old, is also pregnant. The ex-boyfriend had her car, and she asked him to come to her mother’s home so that she could retrieve baby items from the car. That’s when the incident occurred.

“Gut-wrenching. I can’t even describe how it felt. Helpless,” the mother said. “I mean, she’s an adult. She’s 21, but that’s my child. I’m a momma, and I’m supposed to protect her.”

While in the car with her ex, the daughter heard the GPS state how many miles away they were from Disney World. She knew then that he was planning on taking her out of state to Florida.

After driving for some time along I-65, the daughter saw a sign for a Shell station at the next exit. That convenience store just happened to be in Horse Cave. She asked her ex-boyfriend to stop so that she could use the restroom. Luckily, he did.

Once finished in the restroom, the daughter approached the cashier and explained that she needed help. Soon after, the ex-boyfriend became aware that the Shell employees knew of the situation at hand.

According to employee Brandy, the two began bickering and the daughter refused to leave. Brandy’s child was with her at work that evening. She informed Ashley, to take her child into the back room, lock the door, and call the police.

Brandy sprinted next door to Alvey’s Towing and Recovery to seek help, but at the same time, she heard Haley yelling.

“I ran back over there, and she (the daughter) is holding onto the door, and he (the ex-boyfriend) is pulling her out of the door, and we’re begging him like, ‘Hey! Stop! She’s pregnant!’” Brandy explained. “We begged the guy, and he took a real good kick to her, and I had had enough, so I grabbed him by the back of his shirt, and I threw him off of her the best I could.”

According to Brandy, the ex-boyfriend then bounced past her, grabbed the pregnant daughter again by the hair, started punching her in the stomach, and threw her down to the ground.

“I tried to grab his arm at first, like I was trying to grab his arm and hold it down, and Haley was trying to help that girl up, and then he grabbed on the inside of that girl’s face,” Brandy said. “…He’s grabbing everywhere that he can. He was not going to stop, so I started swinging on him. I started punching him in his face as hard as I could, and all the while just trying to hold his arm down. Haley, she’s punching, and she’s just kicking, and she’s doing everything she can. We’re just screaming for somebody to help, just begging.”

“I wasn’t scared at that moment because all that was going through my head was to help her and get him off her,” said Haley, a 17-year-old senior at Hart County High School.

Brandy stated that a man in an RV saw the situation, stopped, and attempted to place the ex-boyfriend in some type of arm lock, but he still had what she described as a “death grip” on the daughter’s hair.

Horse Cave Police Officer Derick Murphy then arrived, and the situation came under control. The daughter used the Shell store phone to call her mother.

“I got the phone call from my daughter about 9:30 Louisville time,” the mother said. “I was thrilled. When I answered the phone, she said, ‘Oh, momma. I’m so glad to hear your voice.’ I said, ‘Where are you?’ and she told me she was in Hart County, and I immediately thought of Doug Wells (owner of Wells Trans-Tech, Inc.)…I thought, ‘Thank God. She’s somewhere where I know somebody.’”

The daughter was taken to the hospital to be examined. Other than scrapes, bruises, and hunks of missing hair, both her and baby were fine.

The mother drove to Hart County and picked-up her daughter.

“If it (the situation) would have happened here (in Louisville), we wouldn’t have had the same outcome,” the mother said. “I appreciate them, those women, with every bit of gratitude in my body…Without them, I honestly believe that my daughter would have gotten either really hurt or something worse. I don’t know if the car they had would have made it to Florida, but they would have been farther along than where they were at.”

There is no doubt that Brandy and Haley could have looked the other way that day, but both said that they knew in their hearts that they had to help.

“I would never have pictured myself doing that, but when she (the daughter) was screaming for help and stuff, it was just like we had to do everything we could to help her,” Haley said. “You would never think you’d be in a situation like that, but we were. I just feel like it was the right thing to do when someone needs help. It could have been a lot worse if we didn’t help her. Who knows what he could have done to her, but if someone walked in right now, I’d do the same thing over.”

Brandy said that she also would do it again, no questions asked.

“It was one of the craziest things I’ve ever experienced in my life, not knowing what to do. It was insanity,” Brandy said. “…But I would do it all over again…I don’t wanna hurt anybody, but I don’t wanna stand back and watch someone hurt somebody else either. That’s not the kind of person I am.”

“It’s compassion that people don’t have anymore,” Brandy added. “They will turn a blind eye, and they won’t help, but that’s just something that Haley and I was not going to do.”

The mother said that while it is every mother’s nightmare for their child to be abducted, it was also a miracle that her daughter found herself in Hart County that night.

“Everybody has been so helpful, even the police officer,” the mother said. “He was very, very helpful, and I can’t say anything but good about the Wells. I called them at 10 o’clock at night and said, ‘Hey, I need some help,’ and they were right on it, so Doug’s my hero, too, and his wife Michelle. They’re my heroes, too.”

“We saw videos (of the incident at the Shell station), and both girls (Brandy and Haley) did not care that he was a man,” the mother continued. “They were just wailing on him like they were wailing on a dummy. They did not care…I owe the two ladies my forever gratefulness, and I feel like God had put my daughter in that particular place at that particular time because He knew somebody would help her. In my eyes, they’re heroes.”

The mother explained that she does not want any sort of “pity party” for her daughter or family, but rather wants recognition for Brandy and Haley.

“It’s definitely about the heroism of those two beautiful girls, those angels,” the mother said. “…They could’ve just called the police and locked the door behind them, but they chose not to. They chose to put themselves in harm’s way for a complete stranger. They didn’t know my daughter from Adam, so that definitely can tell you that they had some very, very good upbringing. I could go on and on and on about those two girls, and I don’t even know them. They will definitely be in my mind and in my heart for the rest of my life.”