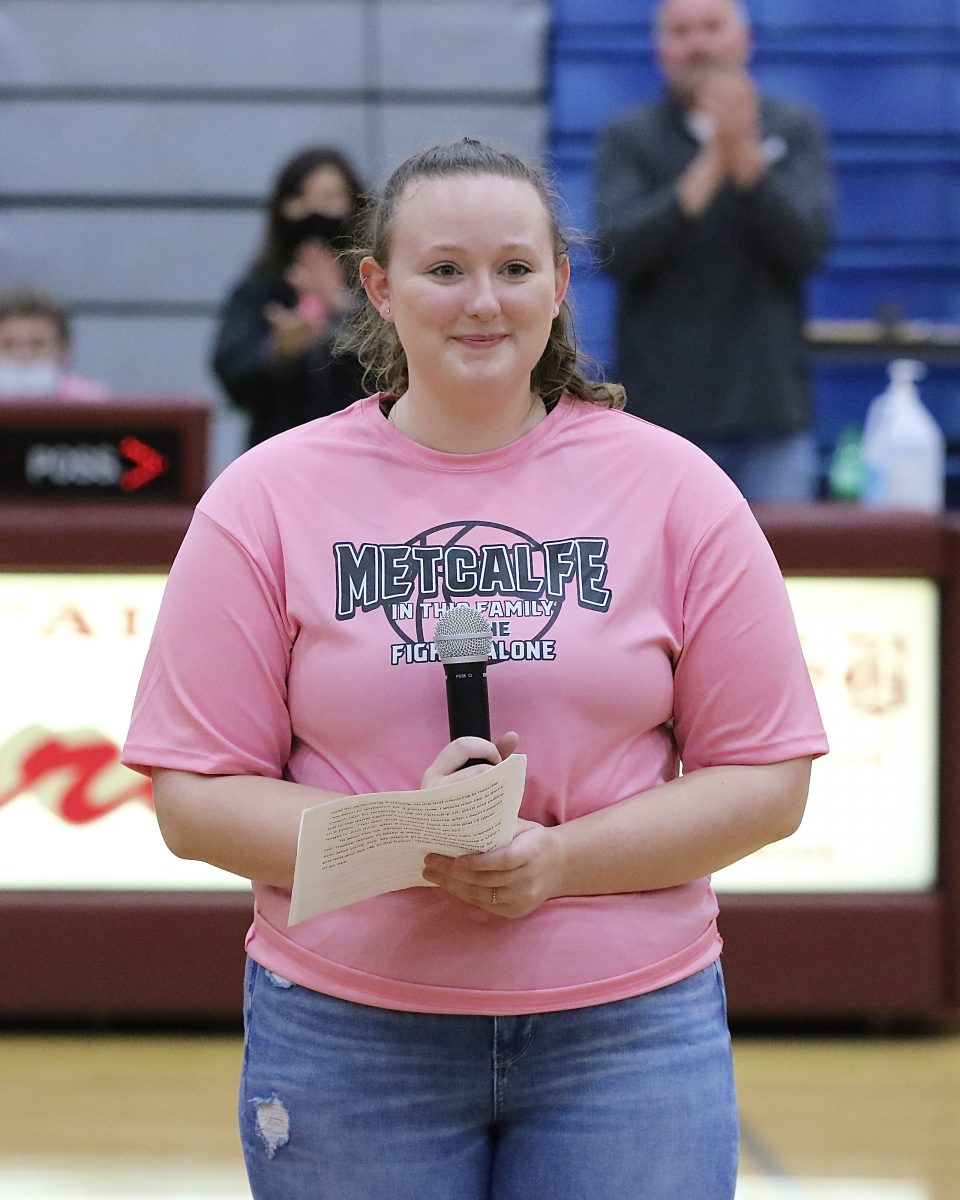 Senior McKinley Crain gave a heartfelt testimonial of her battle with cancer to an emotional crowd during Pink Out. Photo by Johnnie Tarter

Pink Out night was filled with a mix of emotions. Cheers, yells, and tears were all present at one time or another in Hornet Nation’s gym. Metcalfe County Lady Hornet Senior, McKinley Crain spoke to the crowd during halftime of the boy’s game. McKinley gave a very touching testimony of her battle with cancer, which started back in 2016. Tears filled many eyes as she gave her heartfelt speech and there was an eruption of cheers with a standing ovation from the entire crowd. McKinley has been and continues to be such an inspiration to others.

The fans that were lucky enough to be there in the stands, watch on HNN Network, or listen to the KY Sports Guys call the game on the radio, witnessed some of the best basketball this season. Both, Lady Hornets and Hornets, stepped onto the court with a no quit attitude.

The Lady Hornets took to the court first against Greenwood’s Lady Gators.

“Greenwood is a good team and we knew we had to have a really good game to pull out the win and that’s exactly what we did.” Coach TJ Coffey told me and went on to say, “We tried a little different type of defense than we normally run and the team executed it perfectly”.

The Lady Hornets ended the first quarter with a 1 point lead but went to the half down 38 – 33. Both teams returned from the locker room showing determination to grasp the victory. Macy Welsh hit a nice 3 point shot at the buzzer of the 3rd quarter that left the lady Hornets trailing 48 – 44. The 4th quarter was as thrilling as you could ask for. At times it was like Metcalfe hit/missed basket to basket with the Lady Gators. The Lady Hornets pulled out the victory over the Lady Gators with a final score of 61 – 58.

The Hornets then took the floor backed by a fired up Hornet Nation crowd. The first half was filled with intense emotion which saw the Hornets end the 1st quarter down 23 – 16, then go to the half down 41 – 31. The Hornets returned from the locker room intent on not giving up. They took the fight to the Gators cutting their lead on Hornets to just 7 points at the end of the 3rd quarter. The Gators just could not withstand the offense/defense of the Hornets during the final quarter. Metcalfe came from behind to outscore and out defend Greenwood, in the final minutes to get the win 69 – 64.

The Hornets had 3 players score double digits against Greenwood. Boston Devore had 21 points, Wyatt Blythe had 18 points along with 4 assists, Jax Allen scored 12 points with 11 rebounds, Jacob Murrell had 8 points, Dathan Jolly 6 points, and Payton Dial had 4 points with 7 rebounds.

The Hornets will square off against Allen County-Scottsville next. 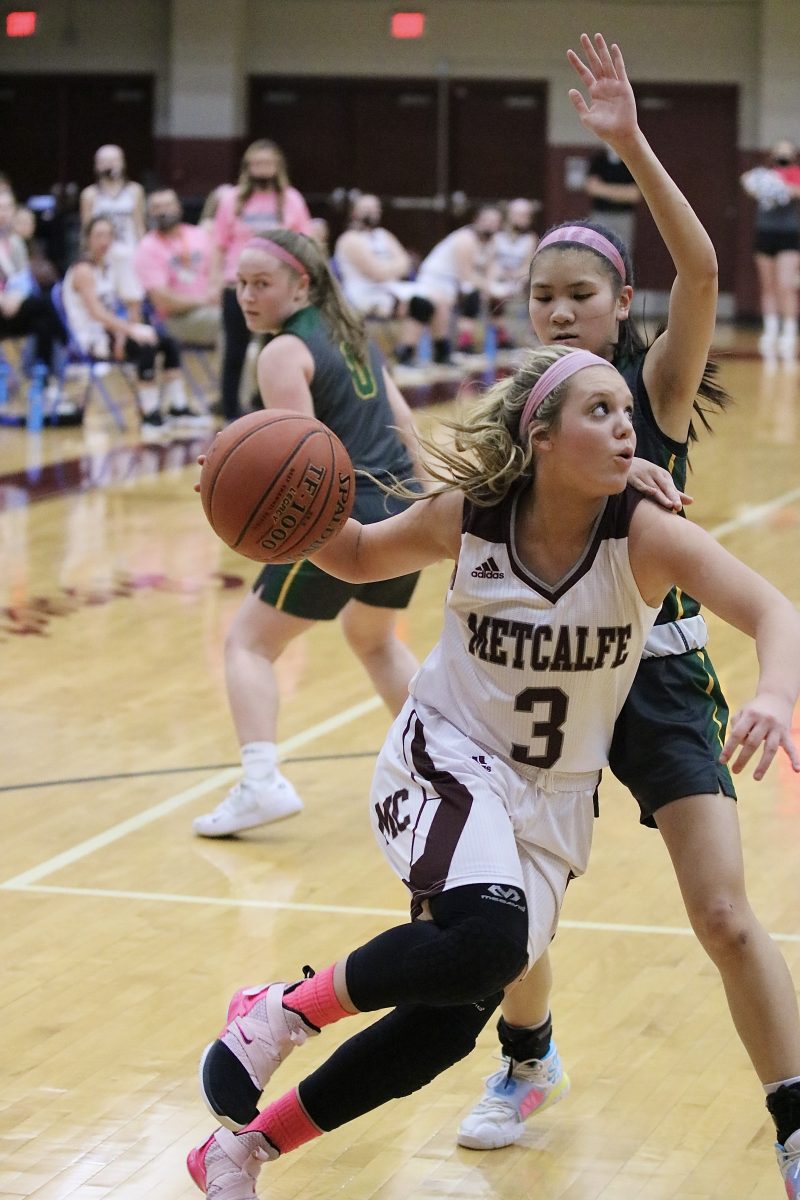 Metcalfe’s Aubrey Glass drives around Greenwood’s Leia Trinh to get to the basket. Photo by Johnnie Tarter 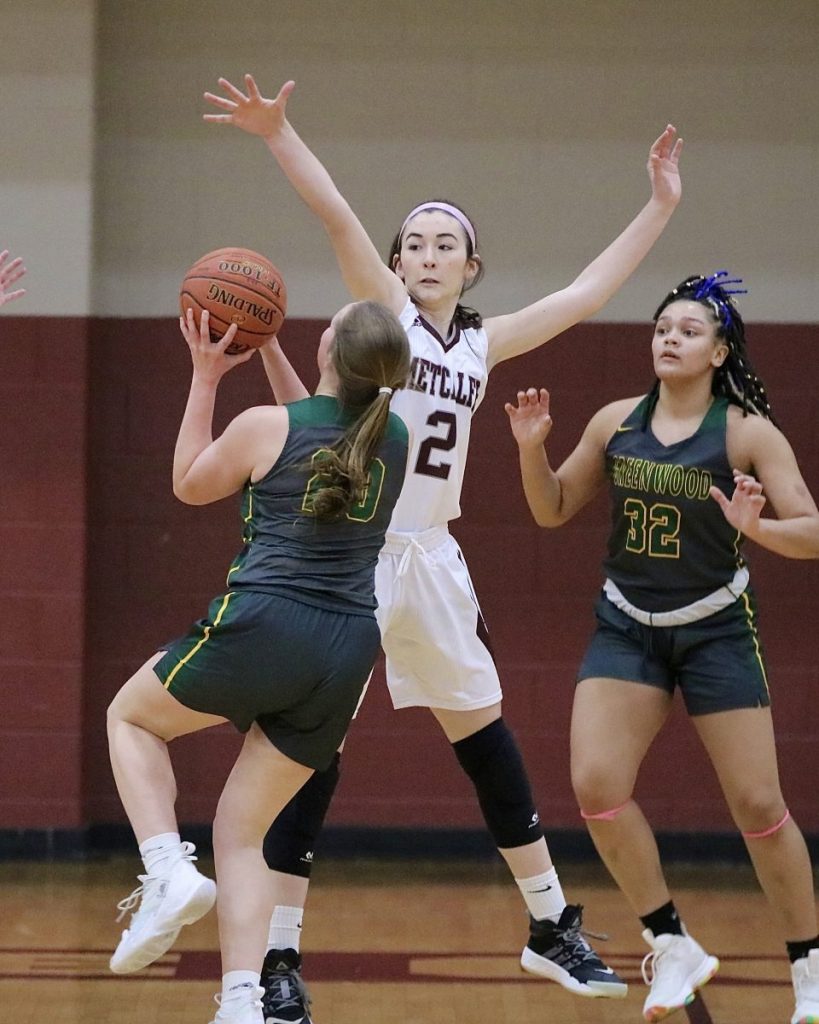 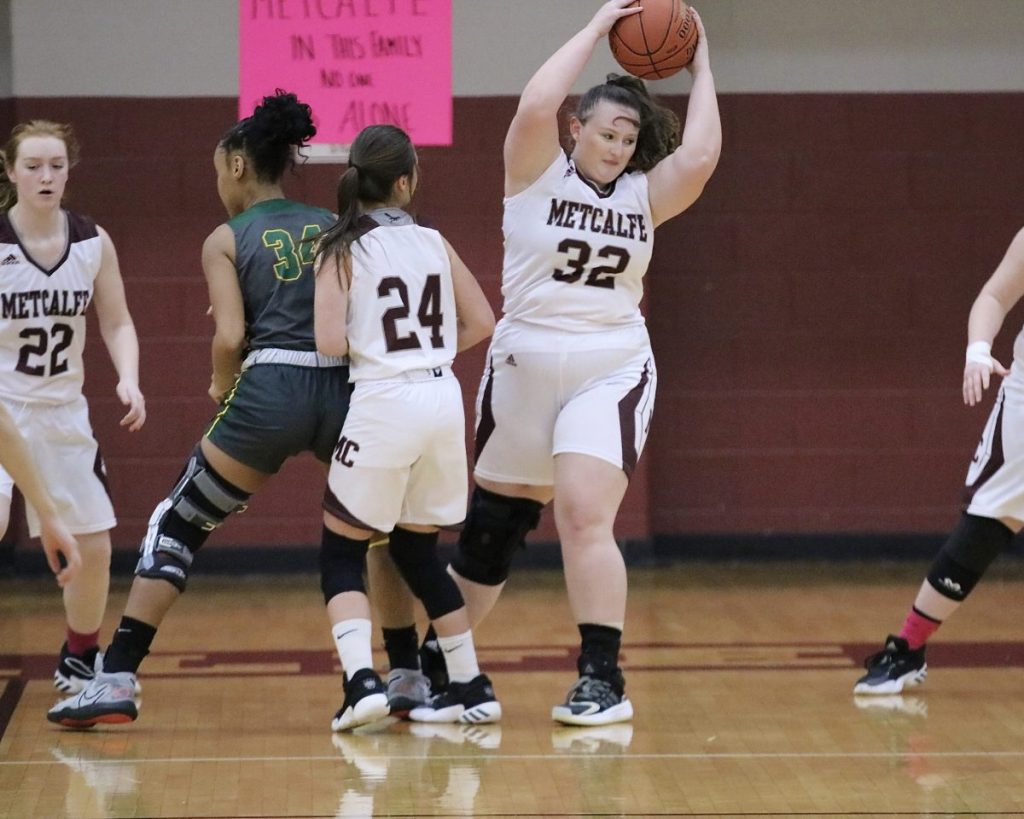 Senior McKinley Crain fights for the rebound for the Lady Hornets on Pink Out night. Photo by Johnnie Tarter 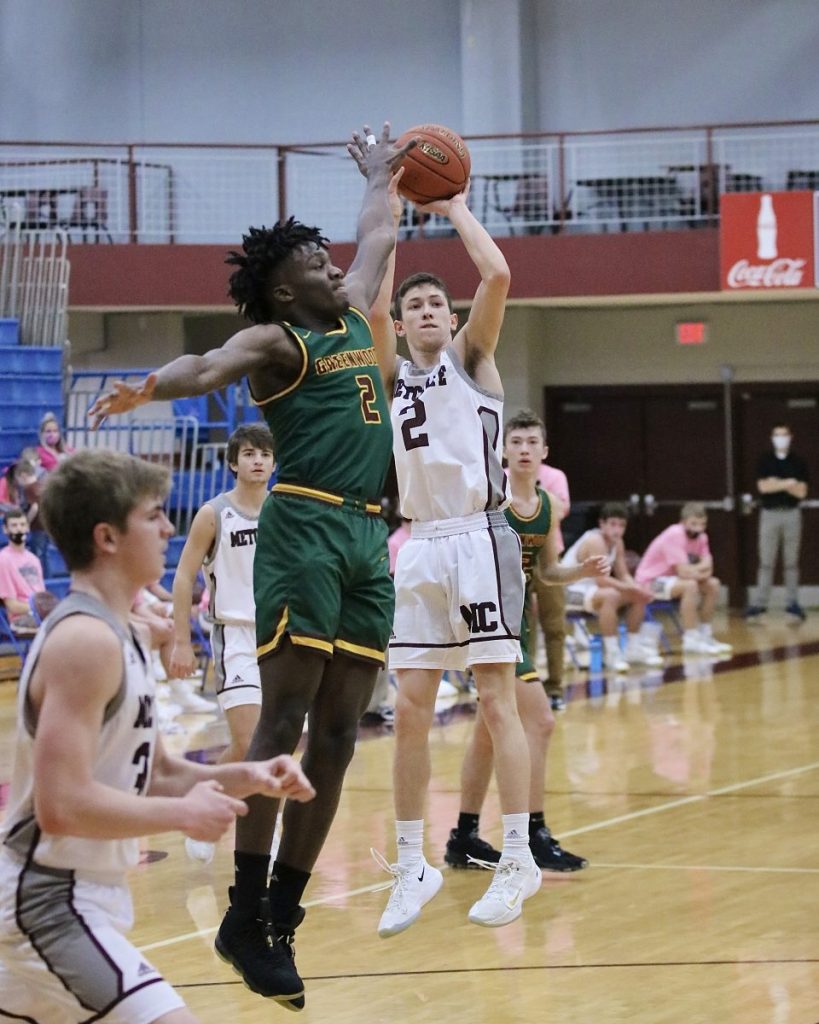 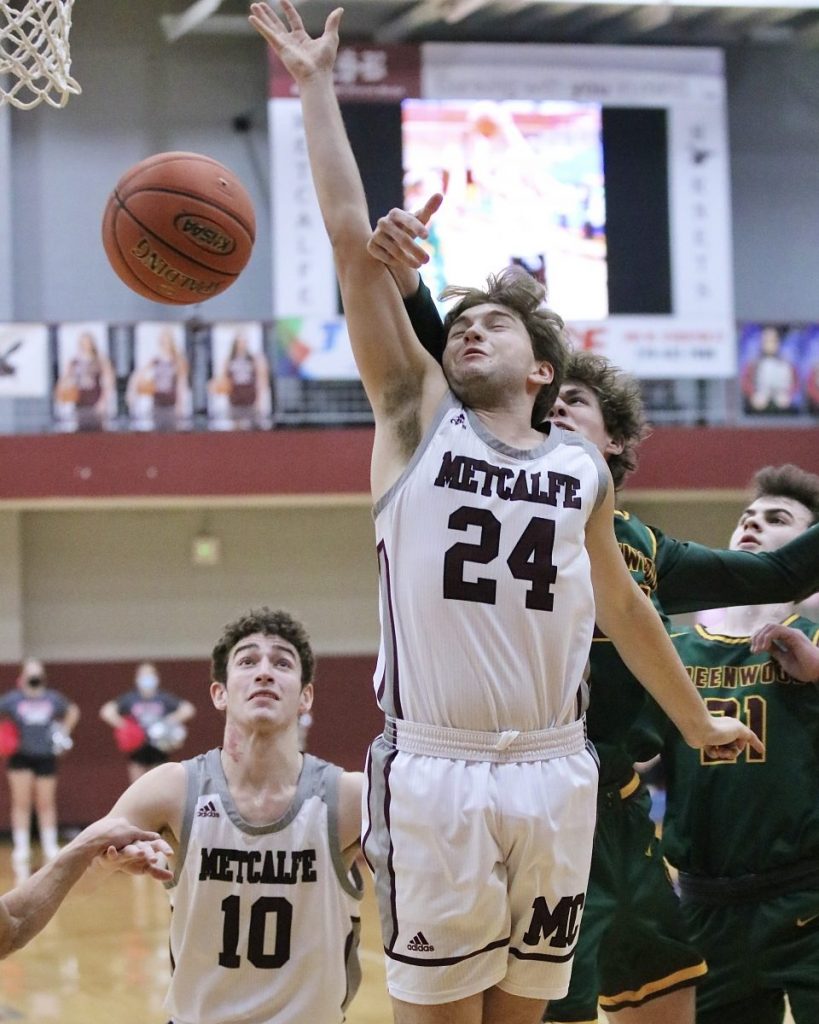 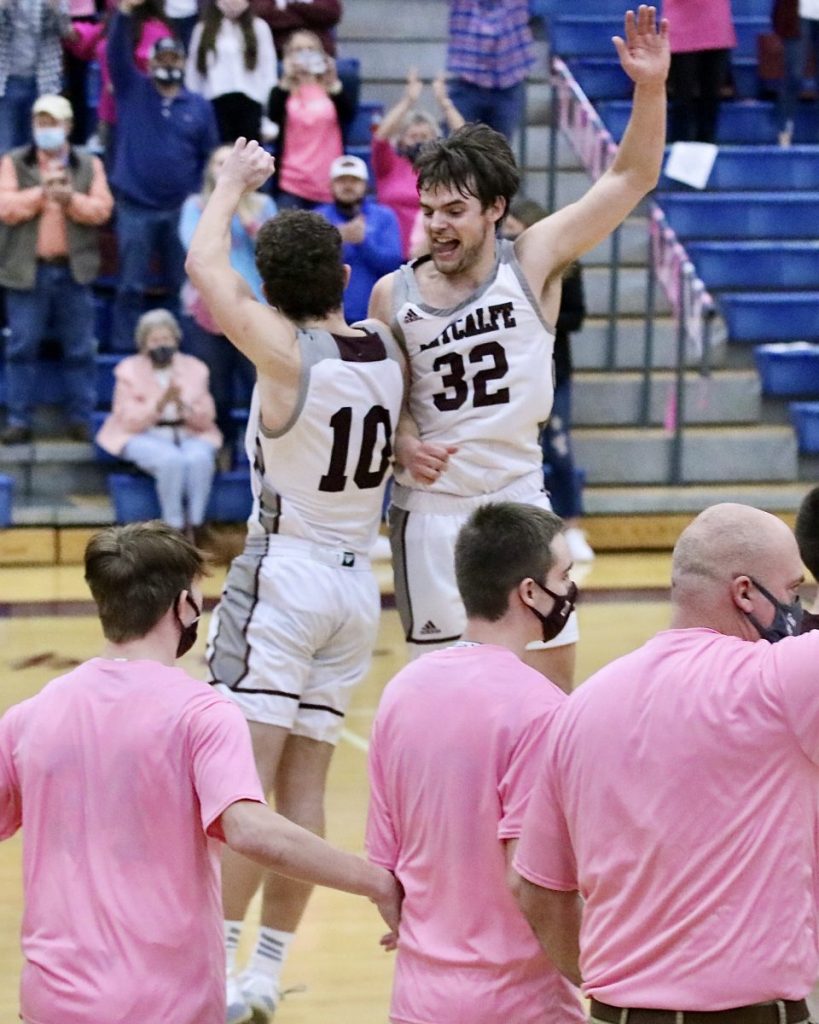