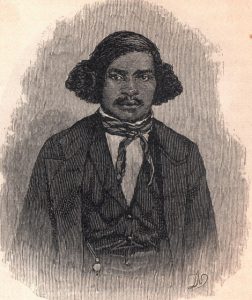 Stephen Bishop was a renowned cave guide at Mammoth Cave during the 1800s.

It is estimated that over 500,000 visitors are lead through the underground passageways of Mammoth Cave each year.

Deemed the longest known cave system in the world with more than 400 total miles explored, no one knows exactly how far or deep the cave may go, but one thing is certain: if not from Stephen Bishop, it’s unclear of just how much of Mammoth Cave would be known today.

Stephen Bishop was a renowned cave guide at Mammoth Cave during the 1800s. A notable figure in Kentucky’s history, he also earned prestige as a cartographer who mapped the cave system’s landscape.

Bishop was born into slavery in 1821 to farmer Lowry Bishop of Barren County. Upon the slave owner being sued by his wife for a divorce, Lowry was in financial despair and reached a settlement with his attorney, Franklin Gorin of Glasgow. Bishop, who is believed to have possibly been Lowry’s biological son, was part of the settlement agreement and therefore became enslaved by Gorin.

In 1838, Gorin and A.A. Harvey purchased Mammoth Cave in hopes to transform the cave into a more renowned tourist attraction. Bishop along with two other slaves, Mattison (Mat) Bransford and Nick Bransford who Gorin leased from their owners, were trained as cave tour guides.

With a growing curiosity that called to him from the depths of Mammoth Cave, Bishop used ropes and the flickering light of a dim lantern to explore unknown parts of the cave system. The cave was a dangerous underground world filled with sinkholes, boulders, cracks, and underwater springs. A blown-out lantern would mean despair and isolation in total darkness. The threat of becoming lost within the cave – and even facing death – was a daunting reality.

Nevertheless, Bishop pushed forward. A brave and inquisitive individual, it was no time before he quickly became an expert on Mammoth Cave.

According to the Smithsonian Institution Magazine, story has it that a tourist at Mammoth Cave offered Bishop a “fistful of money” to guide him to a new area within the cave. At this time, the farthest anyone had been was to the infamous Bottomless Pit, a massive whole of darkness so deep that the light of torches thrown into the pit would disappear. 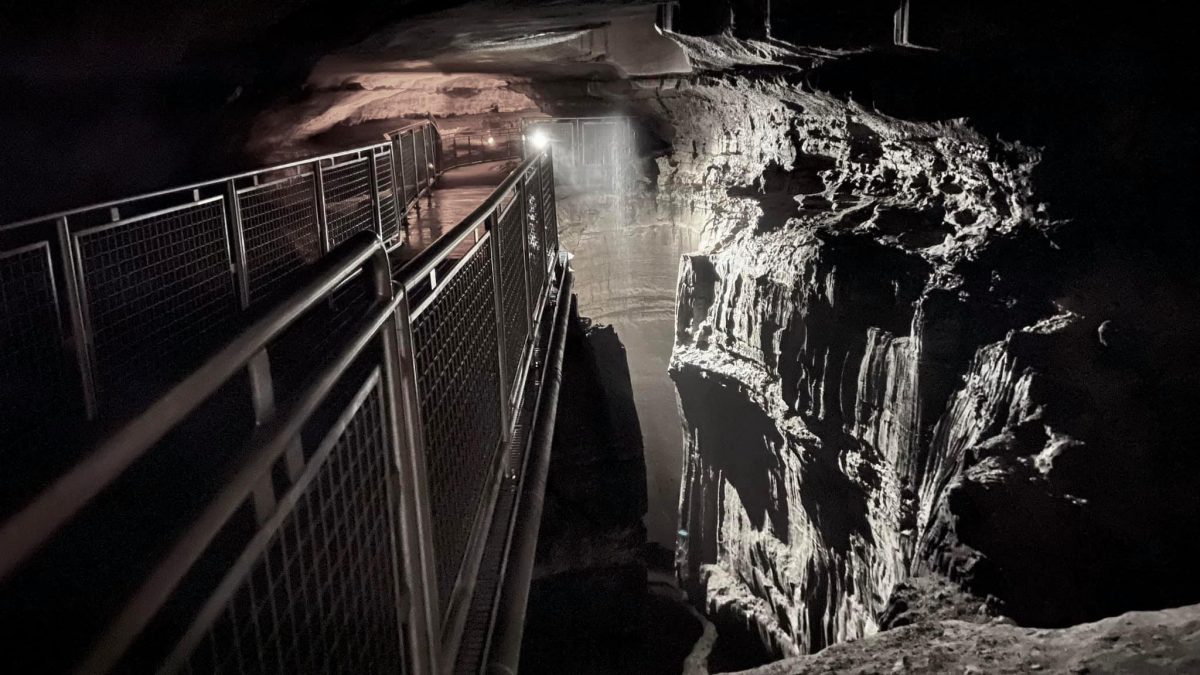 No one would venture near the pit, as they feared being lost into its depths forever. It was at this time, however, that the cave guide’s curiosity far outweighed his fear.

Bishop and the tourist journeyed to the pit and, as stories differ, they either positioned a ladder or a cedar sapling across the pit. Bishop ventured across, carrying a lantern in his teeth while doing so. Within a short distance from the bottomless pit, Bishop discovered a river, supposedly the first body of water that had ever been encountered inside of Mammoth Cave.

Upon further exploration over time, Lake Lethe, River Styx, and Echo Rivers were all discovered and named by Bishop. He also found new species of aquatic creatures, including blind fish and crayfish.

Bishop also discovered what is known as Fat Man’s Misery, a riverbed with very narrow passages of which the cave explorer had to dig his way through. He then found himself in Tall Man’s Misery, an area with extremely low ceilings. Upon coming out on the other side, Bishop then could stand with ease, naming that area Great Relief Hall.

Other areas of the cave found by Bishop included those which he referred to as Little Bat Avenue, Gorin’s Dome, and the Snowball Room.

By 1839, Gorin sold Mammoth Cave to Dr. John Croghan of Louisville. As part of the arrangement, Bishop was sold to Croghan along with the property. It was during that year that two additional miles inside the cave system were discovered, and Croghan sought to improve the tourist attraction by renovating buildings and constructing roads near the cave. 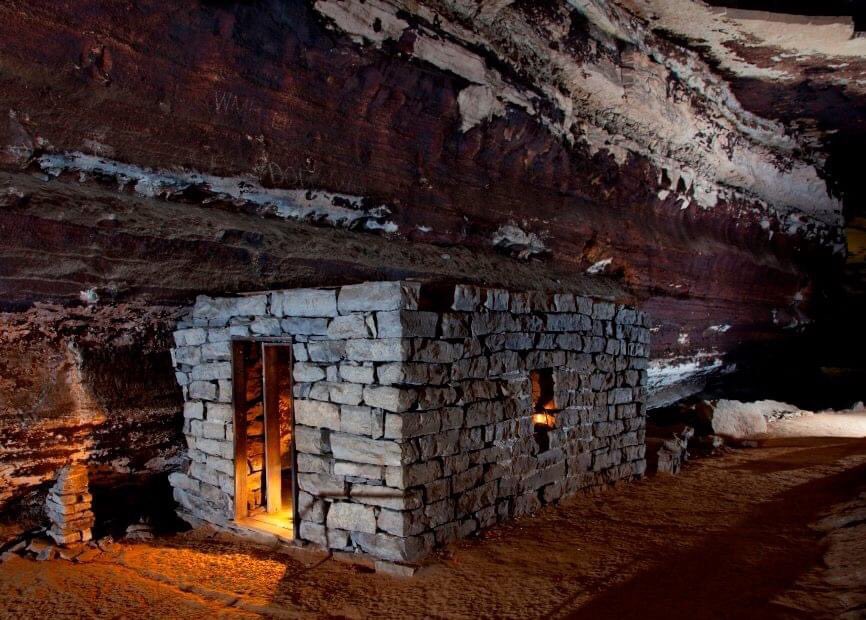 Dr. John Croghan of Louisville had shelters built inside of Mammoth Cave to house tuberculosis patients as part of an experiment. These huts were built by Stephen Bishop and other enslaved workers. Mammoth Cave National Park Facebook photo.

Bishop and both of the Bransford men continued leading tours, including some that lasted as long as 18 hours. Many famous visitors journeyed to the area to tour Mammoth Cave, including author Ralph Waldo Emerson, opera singer Jenny Lind, and several highly respected scientists.

Those who visited the cave often describe Bishop as intelligent and well-versed. It is believed that he learned a variety of knowledge from spending many hours inside the cave with wealthy clientele. Bishop could read and write, speak some Latin and Greek, and knew so much geological information about the cave that scientists were often seeking him out for information.

Although Croghan encouraged tourism in the area, his reason for purchasing Mammoth Cave was two-fold. The doctor was searching for a cure for tuberculosis. Hoping that the pure air and constant cave temperature could cure his patients, Croghan had Bishop, the Bransfords, and other enslaved workers build huts within the cave.

Guided cave tours would pass by the tuberculosis huts and visitors often interacted with the patients. As patients began to succumb to the disease while in the cave, Croghan’s experiment came to an abrupt end.

In 1842, as Bishop was now around the age of 21, he was summoned to Croghan’s Louisville estate, Locust Grove. The cave guide was instructed to draw from memory a map of Mammoth Cave’s underground passages and rooms, which included about 10 miles of the cave system that had been explored at that time.

By 1844, Bishop’s hand-drawn map of the cave system was published as part of Alexander Clark Bullitt’s “Ramble In Mammoth Cave in the Year 1844″. Bishop was given full credit for his work, an acknowledgment that was very rare for a slave during that time in history. Bishop’s map, which was deemed considerably accurate, was used on into the 1880s.

While at Locust Grove, Bishop met and married Charlotte, another enslaved worker of Croghan’s. Charlotte left Louisville and lived with Bishop in the slave quarters near Mammoth Cave, finding work at the local hotel. The couple had one child, a son, Thomas Bishop.

In 1849, Croghan passed away from what was believed to be tuberculosis. The doctor’s last will and testament stated that those of which he enslaved would be freed seven years after his death. This included the Bishops.

By 1856, Bishop was emancipated, along with his wife and son. Nevertheless, he continued to explore the cave and provide guided tours. It was believed that Bishop was saving money for him and his family to move to Liberia, a country located on the coast of West Africa. However, the move never happened as Bishop passed away during the summer of 1857.

Bishop succumbed to what some have called a mysterious illness, while others stated it was tuberculosis. Prior to his death, Bishop supposedly led a tour and even discovered a new section of the cave system, at that time extending the explored passageways of Mammoth Cave to 11 miles.

The infamous cave guide and explorer was buried in an unmarked grave. In 1878, millionaire James R. Mellon of Pennsylvania had visited Mammoth Cave. Upon hearing Bishop’s story, Mellon met Charlotte, who then managed the hotel dining room. He promised Charlotte that he would have a headstone carved for Bishop’s grave.

Three years later in 1881, a headstone finally arrived. It was an unclaimed Civil War headstone with the original name chiseled out. The date of death is wrong by two years. However, the inscription on the headstone reads: “Stephen Bishop, first guide and explorer of the Mammoth Cave. Died June 15, 1859, in his 37 years.”

Over 180 years have passed since Bishop first stepped foot inside of Mammoth Cave. Although he was well-renowned for his discoveries and one-of-a-kind tours, the fact remained that Bishop’s reality during this time was still that of an enslaved man.

Bishop was responsible for the guidance and safety of tourists, and yet he wasn’t even allowed to dine with them. On many occasions, Bishop carried injured men twice his size on his back for miles through the underground cave system, and yet above ground, he was still treated with hostility because of the color of his skin. 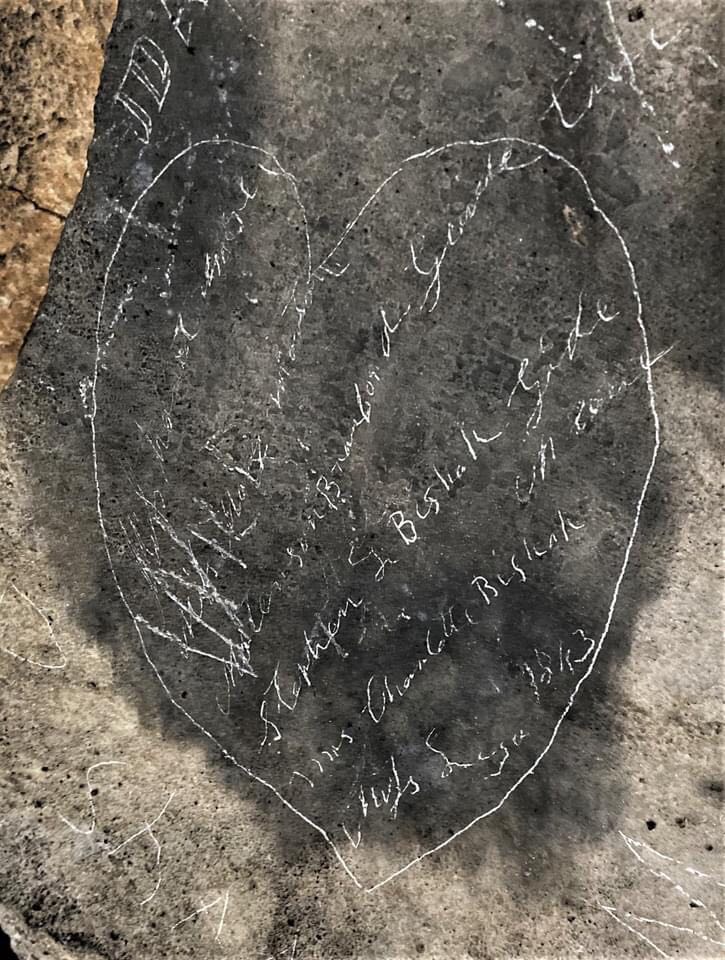 In 1843, Stephen Bishop and other enslaved guides left their mark in Mammoth Cave. Bishop’s name can be seen towards the middle of the heart, with his wife Charlotte’s name directly below his. Mammoth Cave National Park Facebook photo. 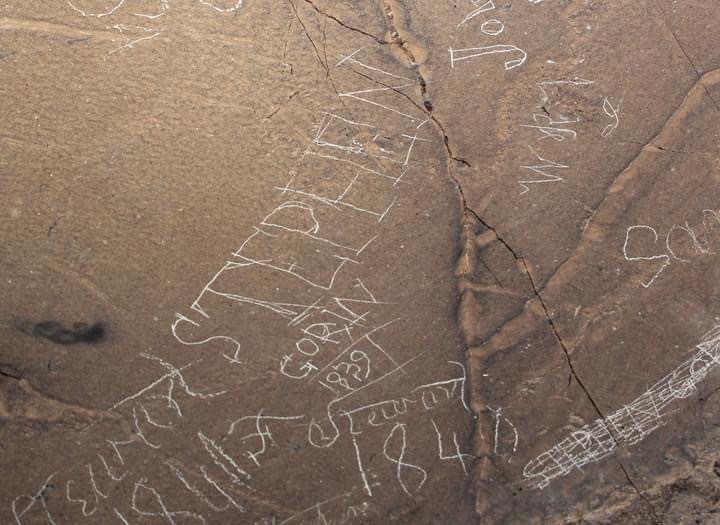 As an enslaved cave guide, Stephen Bishop inscribed his name into the walls of Mammoth Cave.