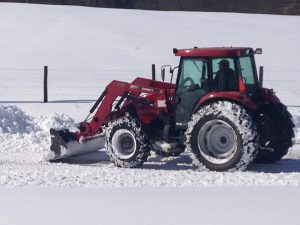 Deidre Day said she often misses the convenience of living in a town or city.

But in the middle of a winter storm last week, she was reminded of just why country living is the best.

Deidre’s mother-in-law suffers from ongoing health issues that can cause even more serious health concerns, and on February 17, she was in need of medical attention.

However, getting her to a doctor would not be easy as the winter storm had covered the driveway in a solid sheet of ice.

“There was no way that an ambulance could reach Wanda’s place,” Deidre said of her mother-in-law. “And she was unable to get into one of our vehicles.”

That’s when the kindness of a neighbor stepped in.

Charles and Joyce McCoy have been neighbors with the Days since Deidre and her family moved to Forestville Road over 23 years ago. Describing the McCoys as having always been great neighbors, Deidre stated that Charles took charge that day, ready to help. 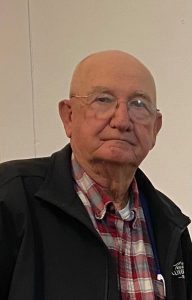 Charles McCoy has been described as a kind individual who has helped his neighbors during difficult situations. Photo submitted.

Deidre said that Charles then waited until the EMS arrived to ensure they didn’t have any problems as well.

“My Amish friend came to help me get Wanda ready to go,” Deidre said. “The local fire and rescue guys came to take care of Wanda until the ambulance arrived.”

This particular situation isn’t the first time that Charles has helped his neighbors during a winter storm. Deidre recalled the big snowstorm of 2015, a time when her daughter Kelsey became very sick.

“We finally found a doctor who could see her, but the snowdrifts in the road were two or three feet deep, and the road had not been touched,” Deidre said. “No vehicles could pass. We called Charles and told him about Kelsey. A little bit later, he arrived in his tractor. He told us to get behind him, and he would plow a path to the main road. She was able to get to the doctor and receive medical care.”

Such kindness is nothing new for Charles and his wife. The couple is always putting the needs of others first.

“Charles and Joyce have always been great neighbors,” Deidre said. “They drop off fresh vegetables from their garden every summer. They delivered food and visited the funeral home when my mom died. They always remember our kids’ important events like graduation or wedding.”

It is kindness like what Charles McCoy showed his neighbors last week that Deidre said is truly a precious gift in this world.